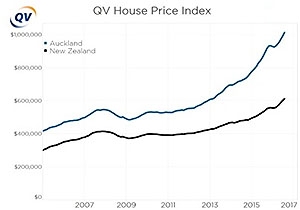 Auckland’s speculative housing bubble might be cooling in the wake of the Reserve Bank’s new loan to value ratios, but there is little to suggest that our days of housing speculation are over.

The pause in Auckland may only be temporary, and the bubble is showing all the hallmarks of spreading across the rest of the country’s main centres.

The only reason this state of affairs is affordable is because interest rates are at an all time low. We are literally betting the house that they stay that way. In fact we may be betting our entire economy on it.

Auckland no longer top of the heap

Auckland is no longer top of the heap when it comes to rising house prices, but first home-buyers shouldn’t get their hopes up.

The change is partly due to a flattening off in the market there, which might be due to the recent Reserve Bank changes in loan to value ratios. However, last time the rules changed, the hiatus in the rise of the Auckland market was temporary.

The real reason Auckland has been usurped is because the speculative bubble has spread elsewhere. We’ve recently commented on the issues facing Queenstown, which have contributed to a table topping 31% rise there. Tauranga, Hamilton and Wellington all have price rises above Auckland; a clear sign of contagion; the speculative bubble is spreading to other regions.

Meanwhile our debt ticks up

Few commentators drew the link between this fact and the other news that our debt has hit record levels. Our private debt tracks our housing bubbles; there was a blip in the 2000s and another one is happening now.

Even more concerning are the comments from budgeting services experts who say that those on low incomes are borrowing just to stay afloat. Housing is now the major driver of rising inequality.

As a country we now owe a year and 7 months worth of our entire national income. This is high compared with other countries, putting us in the top quarter most indebted nations. If we take out the money we owe to each other and just look at our debt held with other countries, New Zealand is one of the highest.

We’ve talked before about how the rise in debt is putting our economy at risk. Currently it is affordable because interest rates are at a record low, but we can’t necessarily expect them to stay there forever. We will have to pay back this money sometime, somehow.

Everyone knows that price rises at the current rate are simply not sustainable, but they show no sign of abating soon. If house prices continue to rise in election year the pressure will inevitably build for action, the only question will be whether the politicians respond with good ideas or duds.

The most likely response will be pressure on the Reserve Bank to bring in income to debt ratios. These restrict the amount someone can borrow as a multiple of their income, and are used overseas. Such restrictions would likely take the majority of investors out of the market. However, in the current market it will be difficult to implement such a policy without shutting out first home buyers or crashing the market entirely. Politicians won’t want either of these outcomes.

We’ve previously critiqued both National’s HomeStart scheme and the Greens’ proposed capital gains tax as being ineffective solutions to the problem.

We really need to close the tax loopholes on housing with a Comprehensive Capital Income Tax, but few politicians look up to that challenge.

Geoff Simmons is an economist working at the Morgan Foundation. This article is here with permission and first appeared here.

But doesn't everyone who owns a house in Auckland now feel like millionaires, driving around in their Audi's? Many got in before the big rises, and would probably never be able to afford to get into the market today.

Really apart from the Media and real estate agents which go hand in hand, and investors, the price rises don't really help anyone, because people need a house to live in and if you are moving you are buying and selling in the same market.

I wonder what people overseas who lent NZers the money to buy our own over priced houses think? They must be laughing all the way to the bank literally.

Yes, the the RBNZ should bring in income to debt ratio limits. The RBNZ recently reported that more than 50% of residential property speculators (“investors”) were borrowing at a DTI greater than 5. This easy credit must be curtailed in order to give first home buyers (FHBs) a fair go on a level playing field.

While acknowledging other factors, that banks are lending at these ridiculous ratios shows that a huge component of the house price growth is easy credit. The mechanism is very clear and well known by Treasury and the RBNZ as follows:
-Treasury states that house price growth has a significant impact on GDP through a number of channels including: “financial accelerator effects where increased collateral values supported increased spending through credit expansion. The latter channel has created a strong link between house prices and the financial cycle.” This cycle brings with it “rapid credit growth, a high volume of offshore borrowing and upward pressure on the NZD exchange rate.”
-RBNZ states that: “ While growing household incomes drove house prices, strong credit growth played a key role in amplifying housing demand and house prices to unprecedented levels (financial accelerator channel).”

If a DTI limit of 5 were imposed on investors based on income of the property, then the effective LVR limit would be less than 25%.

Another possibility also could be to look at what type of valuations are used by banks in their lending decisions. It seems appropriate that banks should be required to look only at valuations for lending on investment properties that apply the ‘Income Capitalisation Approach “, and ignoring the “sales comparison approach” which is generally applied. The “Income Capitalisation Approach” applies discounted cash flow to determine the earning capability of an investment property, - it is the earning capability of the property that the banks should be lending against (ringfenced from other income thus eliminating the tax loop hole of negative gearing).

The efforts of the RBNZ have been slow and timid in relation to implementation of LVRs and DTIs. One need only look at that the reserve banks of Korea and Singapore to see what can and should be done.
For example in Singapore: the LVR limit to investors with two or more houses is 20%, plus tenure of loans must not extend beyond the retirement age of the investor (65), plus there must be a cash down payment of at least 25%.

In summary, there remains much to do to properly regulate the financial accelerator channel to reduce the terrible damage that current “investor” activity is inflicting on FHBs.

It seems that DTI ratio limit is very unfair. The way I understand it is that an investor who already has 100 houses and makes hundreds of thousands of $$$ per year will be able to buy more houses. While a mom and dad who are buying their first investment property in order to help them in their retirement years will not be able to do so because their income might not be sufficient enough. DTI ratio limit is just another slap in the face for those who worry about the rising inequality between the haves and the have nots. The rich will get richer and the poor will get poorer with DTI limits, or so it feels to me.

Your definition of a have not is someone who can't afford to buy an investment property? Sheesh.

Besides, a DTI test would likely take into account total debt and total income, probably with some penalty for rental income (which is inherently unstable). So the brakes would go on those buying "investment" properties with high leverage and low yield.

Cmon Geoff, stop wittering on about CCIT.
Find some ways to head in the right direction such as stopping offsetting losses and stopping the deduction of interest costs for tax.

Er, or perhaps the RBNZ could just put interest rates up a bit. It might work, you know. Encourage saving over borrowing. Too simple for the pointy heads, they must justify the intellectual heights their salary demands and keep expanding their empire.

I keep hearing about interest rates going up, even heading back to the long term average and I understand the implications. I'm horribly conservative from way back and have missed the boat on many occasions having believed that such negative happenings were inevitable.
But after three years of inevitable rises resulting in three years of actual drops, what is it that is going to push the rates back up. I'd point to the risk factor being the obvious one but to me the interest rates have become completely devoid of any relative risk calculation. So what needs to happen, I'm starting to wonder if they ever will.

Maybe further restrictions won't be necessary.I heard a promoter from Brisbane talking about the great buys there.I had a look on the net and sure enough apartments appear to be a lot cheaper.And I spoke to a friend of mine that lives there and he said there's a glut:).

interest rates should reflect risk not economists models. that would fix the problem