Rodney Dickens questions the threat technology poses to employment, noting that the new jobs that inevitably come are harder to see now than the ones that will be lost

Rodney Dickens questions the threat technology poses to employment, noting that the new jobs that inevitably come are harder to see now than the ones that will be lost 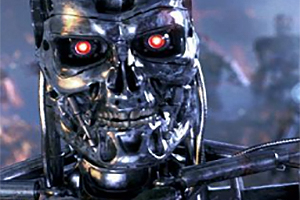 Many jobs that exist today will be displaced by technology.

But there is nothing new in this.

Manufacturing is an industry where technology has already decimated many jobs. Despite this, unemployment rates in the likes of NZ and Australia haven't experienced trend increases.

There is too much focus on the jobs at threat from robotics and artificial intelligence.

Robotics and artificial intelligence pose a threat to many jobs

Many jobs will be displaced by technology but I am sceptical of the pace this will occur while the reporting is biased towards the jobs at risk because of the unknown of what new jobs will be created in the future.

"Almost half the jobs in New Zealand may be done by computers and robots in the future, researchers say."

"A leading futurist is urging Kiwi companies to prepare for a tech-transformed future where machines have replaced many of today's jobs."

"Digital disruption is turning finance on its head and destroying traditional banking jobs along the way."

"Up to 4.6 million jobs may be at risk if Australia does not prepare its workforce for the digital future, a discussion paper has warned."

The manufacturing experience may provide a useful perspective

There is nothing new in technology threatening jobs. In 1990 22% of NZ full-time equivalent employment was in manufacturing. Automation and globalisation contributed to manufacturing employment falling 18% since 1990 versus 81% growth in jobs in all other industries (left chart). If manufacturing had behaved in line with all other industries it would have 383,000 full-time equivalent employees now rather than 171,000. Just as technology in part contributed to the fall in manufacturing employment, it will impact on numerous industries in the future. But despite the march of technology since 1990, unemployment rates in the likes of NZ and Australia haven't experienced trend increases (right chart below).

For many manufacturing companies and manufacturing workers technology and globalisation have meant a rocky road. Manufacturing went from by far the largest employer in 1990 to now being only the third largest (chart below). Maybe the future threat is greater than the experience since 1990. But I suspect the negative impact of technology on jobs will be slower to arrive than suggested by some commentators.

Equally, new technologies and the evolution of industries will create many new jobs. Over periods of 20-30 years it is normal for employment growth to differ dramatically by industry (see the second chart below). It is easy to focus on the threats to jobs from technology and harder to identify which industries will create jobs. But this doesn't mean new jobs won't be created by technology and the evolution of industries faster than current jobs are destroyed, as has been the case in the past. 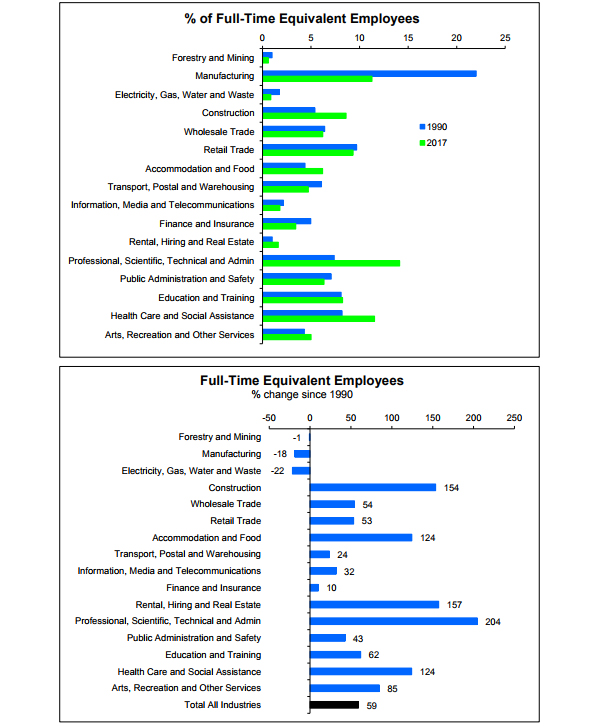 It's proven that robots alone are shrinking labour demand.
https://www.nber.org/papers/w23285

Improving software will have parabolic effects.

Previously we knew what roles would be created. We knew there would be software engineers, and system architects and all sorts of IT roles. And for a while, it was good. They got paid plenty, now wages are going down in IT it shows an oversupply of labour there too. What magical industries will appear that employ the millions that will be displaced? I can't think of anything substantial.

During previous industrial revolutions it required governments to step in and implement labour protections and social services after violence and poverty increased. I'd imagine we are going to need more of that.

The evidence is well and truly with us in most Western economies. Collapsing money velocity that they're offsetting with huge volumes of money printing (life support). What we really need in our economies is some addressing of money velocity.

Think of it like this. Humans have a limited range of competitive advantages over computers and equipment. Slowly those advantages are becoming fewer and fewer.

Ocelot the article you have posted states that it is a model that shows robots competing against human labour so is not about new opportunities that can and will come out of changes.......Human labour will still have to repair, reprogramme and operate much of the robotic technology.

It doesn't matter what happens in the next 20 to 30 years there will be more people required to look after elderly people and the likes of in the USA there is something like 1 in 50 children with other suggestions that it is 1 in 45 suffering from autism and some predict these rates to increase further......
So we are going to need more people than ever before to take care of those unable to care for themselves.......in fact one should be hoping that robots can start to do more and more because there will be so many people to take care of........

"so many people to take care of" Indeed, and what do you think the incomes of these carers will be?

There will of course be jobs which haven't been invented yet,some of which will command high salaries,but will they be sufficient to make up for all the jobs either lost,or downgraded? Do you really believe that robots will not become more self-managed,more able to act independently, or perhaps,by not well paid humans in other countries? I have recently finished a course from the University of Geneva on The Effects of Globalisation by Professor Richard Baldwin and i now have his book,The Great Convergence. He predicts that the next stage will be a massive reduction in face-to face costs through revolutions in Virtual Presence and Telerobotics.
You might also read the Second Machine Age by Brynjolffsen and McAfee. We underestimate the speed of change at our peril.

So the Q is what will the parasites (top 1~10%) feed on when all the "workers" are on WINZ or min wages and unable to buy anything much but the basics ie there wont be an economy left to feed on. As the saying goes you cant get blood out of a stone, but a stone sure smashes glass houses easily. We really need to fix this before the smashing starts.

But what will happen when the robots form a union and strike for higher wages and better working conditions?

If the robots insist on several pet cats each, then this may keep the milk price up.

Collaborative construction of houses using robots. It's an interesting development and it's rather experimental but it seems to be offering opportunities for more complex construction on site but still using a significant number of people. No doubt some construction companies could be quite creative with their work.

You make a good point. I do wonder how many of the new jobs will be low paid - hospitality and the like. This trench of industrialisation is different to the past in that it threatens skilled jobs. I really don't think anyone knows and we'll just have to wait and see.

Great article seems to me this threat is just another potential worry for the masses to feed on very similar to the threat in the past on the masses with religion.....Worried people are much easier to control !

I saw this on a UK thread recently:
"It's astonishing how few humans are necessarily to run Rio Tinto .. People act as overseers, while giant automated machines do all the work .. Japan's got factories that pretty much run themselves .. Throw in driverless lorries to transport materials, and you could get from mining to a fleet of cars in a showroom (which incidentally drive themselves, and could be sold over Amazon with nothing more than a credit card and postcode) without really needing people at all.

You could presumably have a great export-driven economy populated just by robots .. Of course you need people buying the goods – but I'd tend to see the huge numbers of young migrants the EU's bringing in being the biggest drag in the near future .. Vast enclaves of the chronically unemployed, compounding a social problem we're already in the midst of."