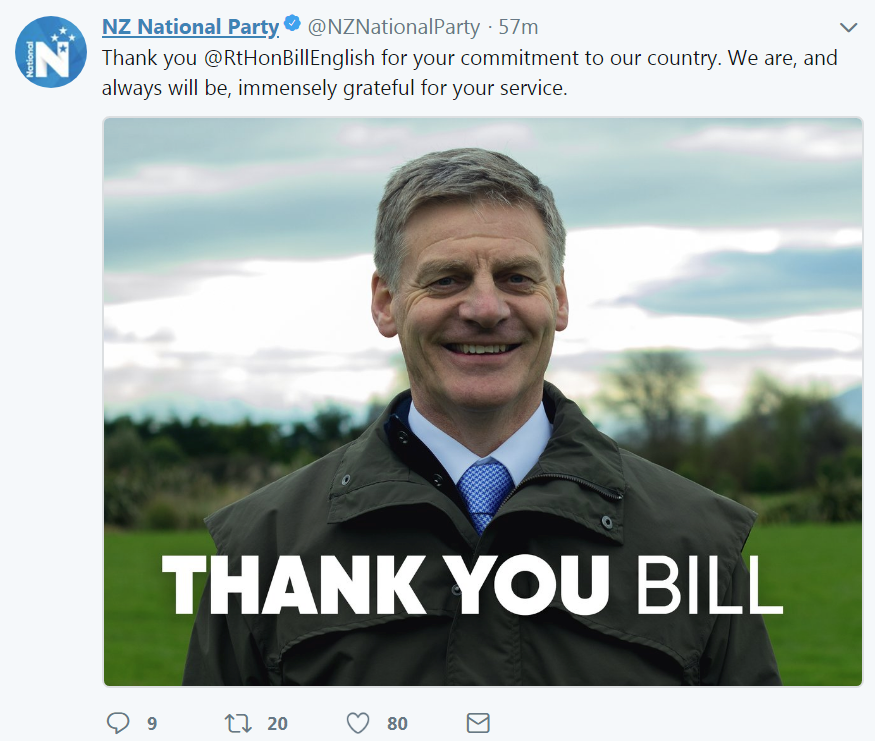 Here is some hard-hitting investigative journalism...

A selection of tweets, in no particular order, made in response to former Prime Minister Bill English announcing his resignation as Leader of the National Party.

The silence of National MPs: Paula Bennett, Simon Bridges, Judith Collins and Jonathan Coleman has been noted as at 1.35pm Tuesday February 13.

Really gutted with Bills announcement today that he is resigning. Bill is a rare breed of politician. He has... https://t.co/Ov9SqjBPKd

Well, it should be obvious to everyone who I am backing to be the new leader of National. It’s time for a woman who cares about transport. You’re the one, @JudithCollinsMP! #gocrusher

Bill English not the only one to get choked up during his resignation speech - long-time friend and fellow "Brat Pack" member Nick Smith also appeared emotional. pic.twitter.com/QgqZEKgZ0V

This is not a time for @NZNationalParty to either lurch right or aim for populist appeal. Big challenge ahead to get the future leadership balance right

English's decision to step down was "purely personal".
Truly, a Nat till the end.

Yet another political leader who "leaves voluntary", but with a big push - cartoon by Hubbard on Bill English's departure from the National Party leadership: pic.twitter.com/gSuCs1f10m

Like so many Kiwis I am saddened to hear my close friend @RtHonBEnglish is leaving Parliament. Bill has given remarkable service to the @NZNationalParty and to a country he loves. His dry wit outstanding economic leadership and rolled Rs will be missed. Enjoy your new life mate.

Just heard the news that Bill English has decided to stand down. Bill has made a huge contribution through his time in office and to politics generally. I admire those who serve NZ in this place, and Bill did for a long time, and he did it well. My best wishes @RtHonBEnglish

Bill English in an excellent @billyralston profile in 1991: "I see myself looking down the barrel of retirement, that's for sure. I've got young kids. The days when someone was in politics for 25 years are over."

A good moment to pause and re-read one of NZ's great poems, "There's the hill out there".https://t.co/Hn1E288gt1

I have hugely enjoyed working with Bill over 9 years as his associate and then as his Finance Minister, and back further when I helped him reorganise the party.
Tremendous service to NZ - sorry to see him go@RtHonBEnglish pic.twitter.com/iy9RmkVBtr