Terry Baucher looks at the Inland Revenue's ramping up of investigation work, interesting technological solutions to deal with the 'hidden economy' and the US taxing people without representation

Personal Finance
Terry Baucher looks at the Inland Revenue's ramping up of investigation work, interesting technological solutions to deal with the 'hidden economy' and the US taxing people without representation 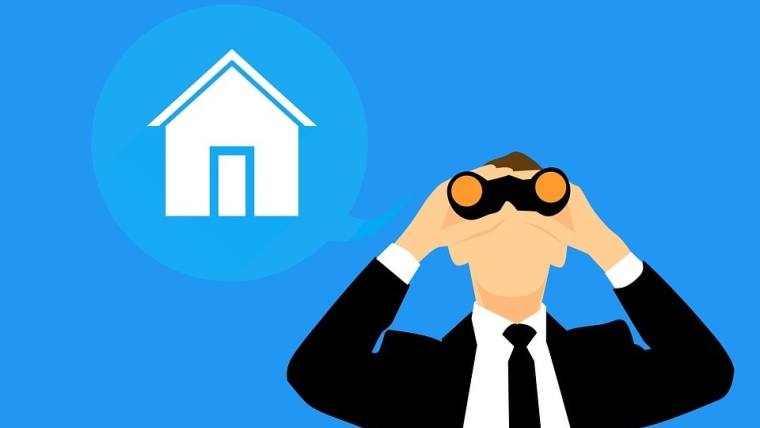 This week, Inland Revenue comes knocking, using technology to deal with the hidden economy, and no taxation without representation? Not if you're not living in America.

Inland Revenue announced that its staff had searched several Queenstown businesses and made unannounced visits to others, as part of a current campaign against the hidden economy targeting the hospitality sector in particular.

You will recall last week, when I was discussing Inland Revenue's annual report, I raised a question of how much work was going into the hidden economy, and in a Herald report on Wednesday, I discussed that at more length and raised concerns about exactly how Inland Revenue was performing in this area and whether, in fact, it had allowed itself to get distracted because of business transformation.

So, this response shows what I also said, that it's likely now the main part of business transformation is over, Inland Revenue's investigation staff will start to increase their activities in hidden economy, and across the rest of the economy here.

And, it's worth actually looking to see how it tracked in its performance [in this area] over the past eight or so years.

Inland Revenue’s annual reports are, as I mentioned, a treasure trove of information in this regard. All we can see is that in the year to June, 2012 Inland Revenue identified $48 million of discrepancies in relation to the hidden economy, and there are similar numbers of tax relating to hidden economy report over 2013 and 2014, but in 2015, as a result of some Budget initiatives, the amount of tax recovered from the hidden economy jumped to $146 million and stayed roughly at that same level for 2016, 2017, and 2018. 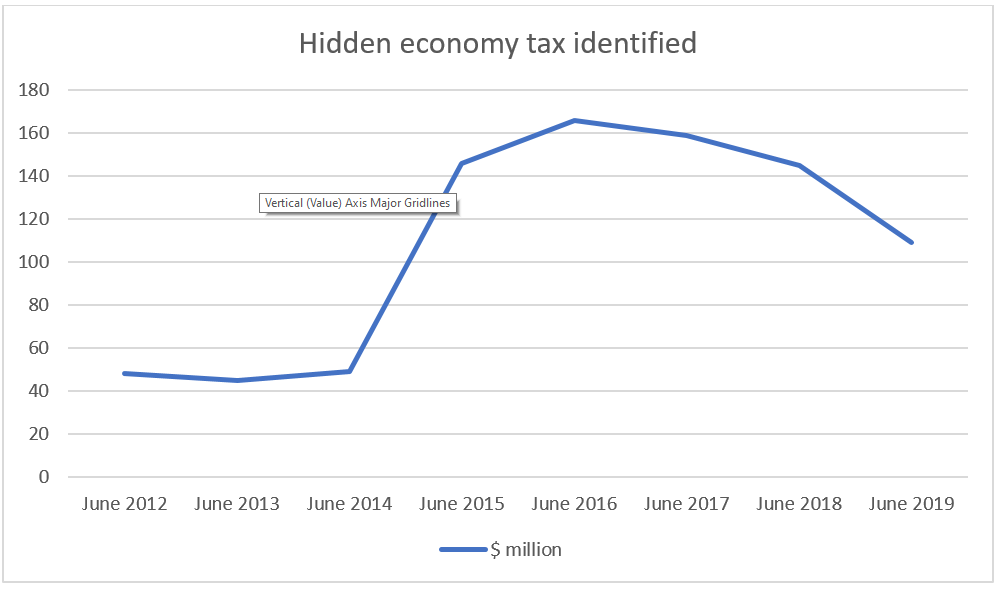 In fact, the $109 million reported for the 2019 year is the lowest amount reported since 2014, and that perhaps suggests, as I said, that Inland Revenue was a little distracted in its dealing with the hidden economy.

And, the actual overall discrepancies that are reported are also interesting reading. Now, what those represent, quite apart from targeting the hidden economy, as I mentioned last week, there's also work that's done in the property sector bright line test, and before the bright line test was introduced, Inland was always for looking at people who are now subject to what is the bright line test.

And, those numbers are reasonably constant, looking back over the same period of time. In 2012 they identified $1.2 billion of total discrepancies. That was actually down from the $1.4 billion in the 2011 year. Again, in 2013 and 2014, it was about $1.2 billion, and the 2014 year also included what is known as the optional convertible notes issue, where Alesco, amongst other companies, agreed that they were up for tax discrepancies totalling $355.8 million dollars. Again, 2015, 2016 both $1.2 billion. In 2017, the total was $1.3 billion, and 2018, it fell to just over $1 billion. And then, this year, June 19, it was just under $1 billion. So, there has been a slight downward trend in recent years, and that could be a combination of a couple of things. 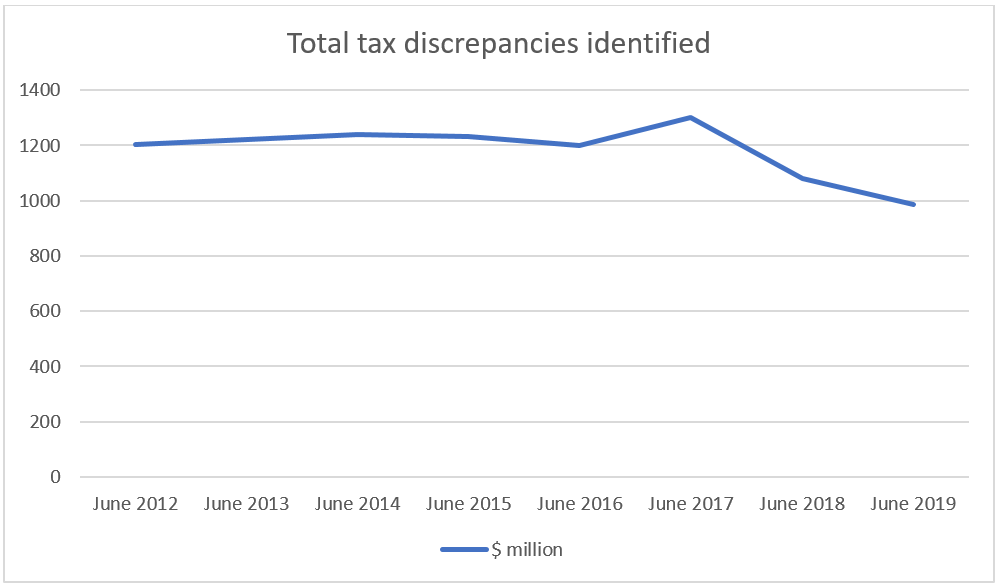 Inland Revenue has had a big shakeup of its investigation staff and some very experienced investigators have left. At the same time, the work that it did in previous investigations such as changes around taxing contractors, withholding payments to being made to contractors, for example, may mean previously non-compliant activity is now within the net, so it may mean part of the baseline of taxes collected is higher because of previous audit activities.

Nevertheless, it would be interesting to see what the turnout is for the 2020 year and going forward. Inland Revenue investigation staff were taken away from their work and put on to answer phones during the peak period of April through to early July, and that definitely had an impact on its audit activity.

We noticed in our practice, and other tax agents said the same, that there was a lack of work on investigations, but now, certainly since the beginning of September, we've seen investigation work resume. So, watch this space is my wording, and as I said last week, you can expect Inland Revenue staff to have paid a visit to your hospitality sector, in particular. It's a common tactic for them to sit and watch to see how the operation operates, so to speak, and then, use that information as part of the investigation.

Dealing with the hidden economy is a worldwide problem and there've been some interesting technological solutions proposed to fix this.

In Sweden, for example, the Swedish tax authorities have implemented a programme where cash terminals are linked to a central registry, which makes it very, very difficult for people to try and use cash to get around the ringing up the till and not putting the cash in. How many times have you seen that?

And that was combined with a campaign by the Swedish tax authorities of also encouraging people to get receipts whenever they used a dairy or other cash-based business as part of a general clampdown on tax evasion. [And, it was so highly successful that] as I mentioned to the Herald because of the greater use of electronic cards, the Swedish, basically have now marginalised the use of cash.  In some places you actually now pay a surcharge for using cash rather than some form of electronic card.

Since 2010 135,000 cash registers in Sweden are now connected to a fiscal control unit, and they estimate that, as a result, they've got an extra 300 million euros per annum, since that legislation was introduced.

In Quebec, in Canada, the time required to audit a restaurant used to take, according to the Canadian Revenue Authority, 70 hours. But, after an introduction of a sales recording module, it now takes three hours. And as a result, the tax authority in Quebec, was able to increase the number of restaurant inspections from 120 to 8,000 per year.

So that's what, electronically, what's going on around the world. Now, interestingly, Inland Revenue, to me, seems to have perhaps fallen off the pace on this, because I recall discussing this with Inland Revenue back in 2013, as part of international conference on tax evasion held with other tax authorities.

And so, I expect Inland Revenue perhaps to pick up these points we're seeing with what's going on around the world, and then, now adopting what you might call a fast follower approach, look to encourage the use of electronic tills linked to the equivalent of what they call a fiscal control unit.

Moving on, a trigger for the American War of Independence was when Britain said to the American colonies: "You know that big ole war we just fought to keep the cheese eating surrender monkeys out? Be nice if you helped pay for that." Well, words to that effect. And, “No taxation without representation!” was the response. And then, it all kicked off after a tea party went tragically wrong when someone played Nickelback instead of Boston. I think that's the history. Probably a drunk Donald Trump version.

Anyway, nearly 250 years on, America's quite happy to tax people without representation. I encountered a situation earlier in the week, which has potentially large consequences for a more significant number of Kiwis than you might think. America has an estate tax and it generally applies to US citizens and residents with estates worth over 11.2 million US dollars.

But, if you're neither an American citizen nor a resident in the United States, a so-called “non-resident alien” in US tax terminology, then you are subject to the estate tax on all assets situated in the US worth more than 60,000 US dollars, I repeat just $60,000.

So, just to confirm this, people who have assets in the United States, so-called US-situated property, are subject to an estate tax. And this is a key warning, it kicks in at $60,000.  So don't be fooled as I was when I first looked at it, that it doesn’t apply because the general estate tax doesn't kick in until the estate is worth more than 11.2 million US dollars.

The threshold is incredibly low and hasn't been raised for some time. And, I suspect that the couple of people I've encountered this week where this has become an issue, are just the tip of a very big iceberg.

So, that's it for The Week in Tax. I'm Terry Baucher and you can find this podcast on my website, www.baucher.tax, or wherever you get your podcasts. Please send me your feedback and tell your friends and clients. Until next time, have a great week. Ka kite āno.

This article is a transcript of the November 1, 2019 edition of The Week In Tax, a podcast by Terry Baucher. This transcript is here with permission and has been lightly edited for clarity.

Thanks Terry. I've come to appreciate your contributions more & more over the past year. I should have been doing something like this 20 years ago. Ho hum.

A drunk Donald Trump version? Is that like an informed and researched Jacinda version?

So for Kiwis who are US non-resident aliens, are holdings in brokerage accounts like Hatch situated in the US and thus subject to the US estate tax? I couldn't find any mention of US estate taxes on the Hatch website. This could really hurt their business model if these assets are subject to it.