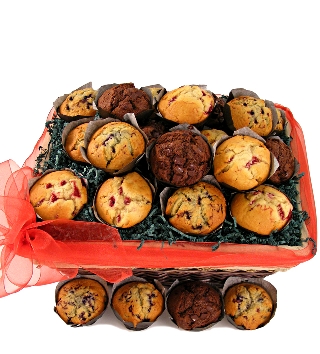 Muffins are a great way to impress the boss.

Over a life-time of employment, your earnings (provided you don't blow them) are potentially your biggest asset. According to one optimistic calculation, a worker on an average salary of NZ$50,000 stands to make $5 million between the ages of 21 and 65 (based on an assumed wage inflation of 3.5%). There's a million expenses (essential and non) that could erode that fortune and spending habits will, to a large extent, determine what you end up with when it comes time to retiring from the workforce. (To read more on how to invest in yourself click here).

How much you earn obviously makes a key difference. But how much are you really worth, and more importantly, how do ensure you get paid what you deserve? I wrote on the subject awhile back and gleaned some decent advice from some employment specialists.

For another view, read this more recent article from yahoo finance, one of the top 15 most popular US personal finance websites.

One recipe you won't likely find in the DIY shameless self-promotion guide is home-baking. I have decided to ingratiate myself to the bosses with muffins and it seems to be working judging by the empty plates. Bernard, can I have a raise please? I'll sell the recipe if it works folks. Kidding.

"Only losers don't have debt," says one of our regular posters. Hmmm. Technically speaking I guess I'm a winner as I remain saddled with a mortgage on a home in Canada, but I aspire to be a winner. I've purged the personal debt in every other category and when I'm freehold I'll be celebrating without rushing to get back into debt.

I'll never be conventionally rich. I've accepted that fate. Yes, I understand the risk/reward argument and the gambles that UHNWIs (ultra high net worth individuals) the likes of Graeme Hart made to get there but I'm not alone in thinking that a) you can be rich without rolling in material wealth and b) that you don't necessarily have to beggar yourself at the bank to get there.

Perennial Kiwi rich-lister and UNHWI Wendy Pye (founder and CEO of Sunshine Books) has a serious debt aversion to the point where she pays for everything in cash. She's quite a character Pye and the story of how she made her millions is a fascinating one, particularly as the catalyst for it all was her getting fired, or rather laid off. I've dug through the archives to retrieve this interview I did with Wendy a year ago. Pye admits to borrowing to get started, and her method of doing so was the most cunning I've heard. But here's the rub; she banked the dough, got rich off the interest, and advanced billed her customers.

Her publishing empire and wealth went uphill from there. 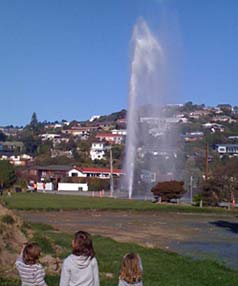 A new term has apparently entered the Christchurch lexicon. Not munted; liquefacked (with a u).

With Mother Nature's latest blow on Monday, it's a word that sounds to be getting a good run. In one of the neighborhood's where I used to live, heavenly Heathcote Valley, springs are popping up in peoples' backyards and in some cases lounges. Even on higher ground, geysers are shooting up from the ground. (See snap below from my former colleague living in high altitude Mt. Pleasant). Christchurch we feel for you.

If there's any justice in this world, the High Court in Wellington will move quicky to resolve the current stand-off between  EQC and insurers over second round claims so people can get on with rebuilding their homes and lives. And on that note, the finer-points of EQC's policy on claims related to land value were discussed in detail in Janine Stark's latest column which can be read here along with several others she's written on the subject.

As an earthquake affected resident herself who lost a home in the Banks Peninusula, Ms. Starks has done some exhaustive research on insurance matters, so well worth a read.

On the subject of death, I had the following question hit my desk this week, via our KiwiSaver Q&A section. It's a tad depressing but such is death.

"I have been a member of KiwiSaver for several years. Should I pass away, please indicate estimated time delay for payout? It seems to be of concern to my wife, as we don't have a comprehensive funeral plan."

The short answer to your question is, don't bank on your KiwiSaver money to cover your funeral costs. The process of getting at your KiwiSaver funds in the event of death can take time, and given that funerals happens within days of dying, it is highly unlikekly you'd get at that money to cover the costs. I doubt they take credit.

I consulted with one provider to find out a rough estimate on time and they said it was multi-factoral so no straight answer. If you have more than NZ$15,000 in your KiwiSaver account, the money will be subject to probate, as will the rest of your estate. If you don't have a will, you'll need a letter of administration and dying intestate presents all manner of issues which can be time consuming and costly to resolve.

If you have less than NZ$15,000 in your KiwiSaver, then probate is one less obstacle to getting at the money. You'll have to complete more paperwork with your provider. That includes a standard form, supplying a death certificate and some form of statutory declaration. If you have all your ducks in a row, if could be a relatively smooth and efficient process but banking on the adminsitration of it happening before the funeral would be naive.

If your wife is already losing sleep over this one, I would suggest you request from your provider the paperwork necessary to withdaw the funds (so you know what's involved) and also have a chat with them too about your personal circumstances. I can't pretend to know the full costs of a funeral in New Zealand, but know enough to know it's not cheap.

As a bit of comic relief, here's a video clip from one of my all time favourite television shows "Six Feet Under,'' which (as well as reflecting the human condition and family dysfunction) depicted the commercial aspect of the death industry.

I can't tell you how many boring meetings I've sat through during my years as broadcast reporter with CBC where we sat around pitching "story ideas" to impress bosses (as well as fill their day) only to have a handful manifest in actual reportable content.

Part of it was owing to the nature of the business because breaking news gets in the way of the best laid story plans (and also pre-conceived ideas about how the day will play out) but a good number fell through because they were half-baked ideas (not mine of course) to begin with engineered more to fill time instead of air-space.

I expect the boring business meeting is as commonplace in corporate culture as the watercooler but to what end and do they have to be that way?

Jon Petz in his book "Boring Meetings Suck'' argues no and offers up some "suckification reduction devices" to alleviate the tedium. You'll get the gist of his strategies in this review from the Globe and Mail.

Petz's suggestions: holding virtual meetings by text or tweets; making the last person to enter the boardroom take notes or chair the meeting to ensure punctuality; or if people are chronically late,l eaving a business card on a empty table with a note to this effect “I was here for the 1 p.m. meeting but no one else was, so I assume it’s cancelled. Call or text if the meeting happens.” With luck, they won't, he wryly suggests.

We just get on with business and when there's something worth talking about, we 'yammer' it via an internal messaging system. Needless to say, it's a deadly quiet office but arguably a more productive one than most.

Great muffins Amanda. How about a nice fresh bowl of porridge and a glass of milk instead of a raise?

And it's about time we scheduled a meeting...

Flat white in lieu of raise, sound goods to me, just don't take away my KiwiSaver or the fur will be flying.

#2 Google ENTJ or perhaps ENFP, but my money for Hart would be on the former.

We are not all endowed with the ability or inclination to be high flyers. The trick is having closer communities where there is social responsibility by these guys that are.

If you look back at the equality threads it is mostly the new world cultures that have a large disparity. In more mature cutlures like those in Scandinavia it isn't socially acceptable to display your wealth.

If you have all three your loaded!

If only I could convince the whanau to relocate from the other side of the planet,...

What's a "whanau"? We don't all speak Albanian.

It's the stage before 'further later'.

Yeah , it's that incessant whine of a 6 year old in the back-seat on any car journey ,

So true! We had barely driven 1 km today when they started asking if we were there yet. We have to psychologically prepare ourselves every time we try and make it to Rangiora!

Ah , you're making me home-sick , Elley . Cust & Rangiora are my home-towns .  Uncles had farms around Oxford , Summerhill . And we had 200 acres next to the Rose Nursery at Cust  .

...... That is an excellent little drive between Oxford & Rangiora . My childhood buddy & me used to cycle out to the Bennetts store ( yes , tiny Bennetts had a shop ! ) to purchase Fanta and chocolate-fish .

No that whining from the backseat is called payback Gummy. I can't imagine you as a hands-crossed quiet little nipper silently counting sheep on long car rides with nary a whimper of protest.:)

Was one of the first words I learned upon moving to NZ, from Canada, is it the new Albania because of sports hooligans rioting in  Vancouver?! I think the kiss defines us best, though I believe it was an Aussie that planted that now famous smooch.

That's right NZ is a bi-cultural society. That means there are maoris and there is everyone else. All of the European cultures and Asian cultures and every other combined adds up to one maori culture. I forgot about that.

But as for a raise? From Austerity Hickey? ... DENIED!

Maybe you should go for perks instead. Free leased laptop for use at home and work, shower block at the office (Bernard would need one after his cycle commute in to work anyway), bagels and cream cheese and real coffee at morning tea (and whatever you fancy for lunch). You could practically live there and save on food, beveridges, incidentals, heat, power and so on. Might as well turn having to go into the office to an advantage. :)

Oh great, now I have a craving for a toasted bagel and cream cheese with salmon. Doh.

Terry Baucher "The Week in Tax: The rules and rates tightened further"