Gisborne here I come; Why bigger isn't better, it's just more expensive; Time is money; The '50s investor; What Facebook reveals about your work performance

Gisborne here I come; Why bigger isn't better, it's just more expensive; Time is money; The '50s investor; What Facebook reveals about your work performance 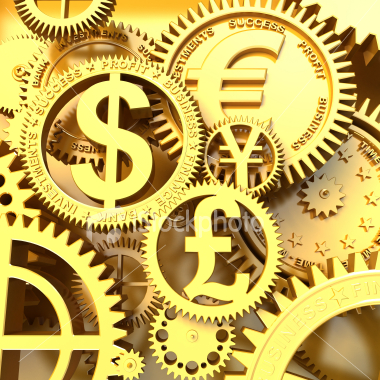 According to our Roost Home Loan Affordability report (hot of the press) Gisborne is beckoning. Along with Hastings, Invercargill, Wanganui and Rotorua. I'm told I might die of loneliness if I move to Gisborne and also that I need to take up surfing. As a single income earner, our metrics indicate that I can pay the mortgage without resorting to eating cat food, which is not the case if I become domiciled and saddled with a mortgage on the North Shore. (Eds. You'd have to eat the cat and dog as well as their food to afford the North Shore...;))

Check it out and make sure to read our assumptions.

2) Bigger is not better

In a low interest rate environment such as we are facing, many are undoubtedly weighing up a move to a bigger home. The trouble is with the bigger house comes a whole whack of extra expenses; more furniture, higher heating costs, more knick-knacks, insurance, etc. etc.

This blog from freefrombroke.com spells out the financial hazards and enjoins the financially minded home dweller to satisfy themself with the small is beautiful mantra.

Ever since becoming a parent, I've found myself in a time warp. I've been warned that the speed of time will only accelerate from hereon in. It's a scary thought for a number of reasons, but especially from a personal finance perspective where time is money.  How you choose to spend your time will directly affect your ability to earn unless of course you've made it to the stage where others are doing your bidding while you go fishing. Those struggling to manage their time may find value in this piece from liverealnow.net on the importance of time management.

Speaking of time, this article from the Wall Street Journal on-line compares the current investment climate to the '50s and looks for any lessons we can apply. It resurrects the old stock versus bonds debate.Here's an excerpt.

For their history lesson, investors should set their wayback machines to the period beginning in the late 1940s. It was a time when bond-market interest rates didn't float freely as they usually do, but instead were capped by the government at low levels to help the country manage the enormous debts accumulated during World War II. 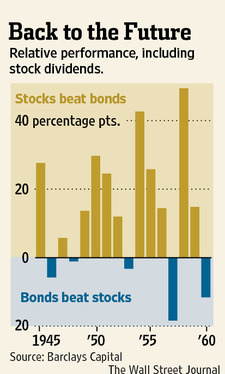 Economists have a gloomy sounding term for when bond-market rates are explicitly or implicitly capped below the rate of inflation. It's called "financial repression."

Today, the Fed is engaged in a similar push. It's been buying trillions of dollars of bonds in an effort to keep market rates low to help repair the economy. The Fed has said it expects to keep interest rates near zero until late 2014.

Barry Knapp, head of U.S. equity portfolio strategy at Barclays Capital, has studied this period and the period after the Fed loosened the reins on rates in 1951.

For the post-war period in which the Fed capped rates, as is the case today, investors earned meager yields. At the time, the Fed was keeping rates just north of 1%, a level which was below inflation.

It's worth noting, though, that by keeping rates from rising, the Fed also kept bond prices from falling. "The yield cap meant prices couldn't go anywhere," says Mr. Knapp.

Meanwhile, stock prices struggled during that period. Conventional wisdom in the markets these days is that extremely low government-bond yields force investors to move their money to riskier investments, such as stocks. But, says Mr. Knapp, "that's not what happens until [bond] prices return to normal."

I'm not a big fan of FB. I joined the Zuckerberg patented cult a few years back for the sake of a story just when FB's tentacles were reaching into the NZ market. It was experiential journalism. Like millions of other suckers, I'm stuck now. Facebook, having cannibalised hotmail and all the 90's era email portals, is where everyone seems to be hanging out in a virtual capacity. I know a few abstainers but not many.

It's a matter of curiosity to me how my "friends" use Facebook. Seems it's the usual suspects updating their status every two hours. Occasionally, I will add to the news feed with a frivolous dog pic or what have you, but mostly I exploit it for my own work purposes.

Should any subsequent employer resort to cyber sleuthing, my Facebook behaviour should bode well for my hiring prospects. According to this piece from the Globe and Mail, personality researchers who analysed Facebook profiles  as a gauge of work place performance gleaned far more from social media habits of their participants than a standard personality test. That's based on the fact that Facebook pretty much reveals all; your looks, your prose, your humour or lack thereof and of course friend count. I'm still a sceptic either way.

Yuck! I therefore remain in search of a  roach free affordable patch of NZ paradise.

Sadly Amanda I have to report you will not find any part of New Zealand free of politicians or bankers.

Gisborne realestate consists of small islands of quality housing in leafy suburbs in a sea of poor quality housing, hence the affordability statistic. Great place to live all the same.

I live on the North Shore. I like the high property prices, it keeps the riff raff out. However, there are immigrant dog eaters on the shore too. I thought it was a cultural thingy, did not occur to me they might be poor.
Only thing wrong with the shore is that I think Len Brown will rape us hard in the coming years since our house prices are higher.

What an unpleasant thing to write.  Even in jest (which I hope it was), it's not nice to read.

In jest, get a sense of humour. Amazing how often jest is reality though. Seen it with my own eyes in Forrest Hill around Xmas time, Rover was a feast, not his food!

totally agree with the comments about Len Brown.   I used to live in the leafy parts of 'Manukau City' where we paid higher rates than equivalent properties in Remuera, and saw nothing for it.   In that time the city built a new stadium in the South and a huge new motorway network down there too.  We were lucky to get our roads re-sealed with that awful cheap stone chip ... in the weeks before Christmas ... now and then.
so there is some anecdotal evidence for you.

Interestingly they are becomming more unnafordable, not less.

Gisborne.. nice place.
You'll have to work hard to buy that leather sleeveless vest and a nice colourful patch in the back.  But it just doesn't look right on a chic !

I would be doomed if my employer had access to my fb account ... depending on what they were looking for though ...  the article did not give any insigts into how personality and perfromance was analysed from fb profiles so on that basis I remain sceptical.  Furthermore, personally I use my fb account for entertainment and relaxation.    I do that with as much vigour as I work (which is very hard and very effectively, if I say so myself :) )   I thought the article was baseless.