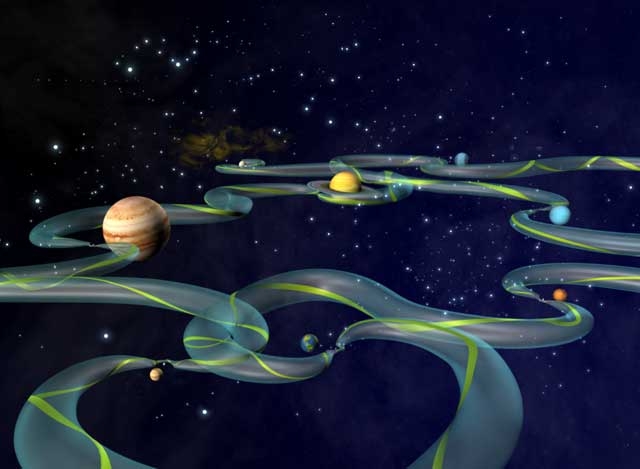 CNN reports that PayPal is "getting serious" about a payment system for those going into sub-orbital space soon, or living on planets later. Seriously? I'll be interested to see if the first purchase in space is a barf bag from a weightless astrosurfer.

On the realms of reality, I have a friend who spends a lot of his time with his head in the clouds. It made perfect sense therefore that he made the virtual leap as well into the iCloud wherein now dwells his contacts, email, photos and music. For those of you still wrapping your head around the whole cloud business,  access is from anywhere with the Internet and you only have to change the data once. That's music to the ears of anyone who has tried to migrate contacts from one database to another.

Data isn't the only thing that's headed for the ether. House prices are again sky rocketing and not just in NZ.  In the US where the credit crunch crisis decimated housing values, many markets are seeing a healthy recovery. The following from Daily Finance caught my eye not only  because it referred to house prices rising strongly in America, but also that mortgage rates had gone up a full percent on Ben Bernanke signalling an end to US money printing in mid 2014 IF the economic data there continues to sing along as it has recently.
One has to wonder what will happen if, or more likely when, interest rates head north again in New Zealand and the implications for those stretched to meet their current mortgage payments on over priced houses bought amid the expectation that prices here only go one.  As a side note,  a popular real estate agent on the North Shore mentioned to me recently that she had her best year ever and that bidding on houses up to $1.5m was "crazy." Amazing $1.5 million is almost considered mid-market nowadays, in Auckland anyway.
3) Compounding interest

Compliments of Mr Money Mustache, a reminder of the power of compounding interest for enthusiastic savers. He's making no outrageous assumptions regarding returns either, although NZ tax rates will skew them a little. Some will baulk at the idea of saving 50% of after tax income, but before you completely dismiss the idea, look at the results if you do.

In the word of Albert Einstein who labelled compounding interest the eighth wonder of the world; "Those who understand it, get it. Those who don't, pay it."

I was interested to see another pitch for index investing, this time reported by Mandi Woodruff from Business Insider. The debate on active versus passive is as old as the indexes themselves, which is some cases is well over a century.  You might wonder what and how many options for index investing exist within KiwiSaver. Remarkably, despite their popularity with investors keen on preserving gains and minimising the extractions from fee hungry fund managers, only two providers actively pitch their wares in this space; ASB and SuperLife.  Even then their hedging policies for offshore investments vary widely, as can their asset allocations. Can they fairly be called index trackers and are their fees as low as they claim? Yes, they charge lower fees for their services, which is to be commended, but there are still plenty of subjective decisions made in the managing of the money. This has to be the case with asset allocation and hedging so, as is always, get advice before you take the plunge into active or passive investing.

5) The world's most expensive mattress

Not my problem but some of you might ask yourself what you would do with the vexing problem of "too much money." As a suggestion, perhaps you might want to consider upgrading that sandbag mattress. Matt Brownell from DailyFinance took on a rather cushy assignment reporting on the comforts of the world's most expensive mattress made of Mongolian cashmere and Latin American horse tail.  I'll leave it to you to find out what it costs, but either these things come very expensive or it's greater fool theory. Suffice it to say the most basic model from Savoir Beds comes with a $10,000 price tag. That said, with the 'properly expensive' model you get get your own personally monogrammed coat of arms on the headboard.  Lordy.

On space travel and living in the cloud, I couldn't help but think of the Beastie Boys. RIP Adam Yauch.

One has to wonder what will happen if, or more likely when, interest rates head north again in New Zealand and the implications for those stretched to meet their current mortgage payments on over priced houses bought amid the expectation that prices here only go one.

One expects to buy a cheap house for oneself!

One great thing about a *really* good bed is every night when you lie down you congratulate yourself on your brilliant purchase!