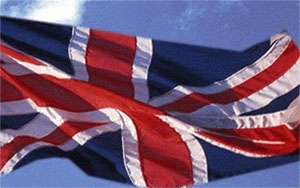 There has been a lot of talk of the implications of the Brexit vote and what it will mean for the UK in general.

But what, in practical terms, is it likely to mean for those with UK pensions and those thinking about transferring their pensions?

In this article we look at each type of pension to understand the implications for people whether they have a pension in payment or a frozen pension (one that has not come into payment and you are no longer contributing to).

CONSEQUENCES OF BREXIT ON UK PENSIONS AND PENSION TRANSFERS 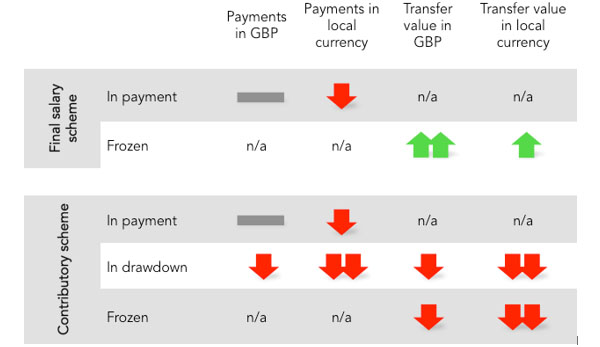 Final salary schemes (or defined benefit schemes) form the largest part of the UK private pension market accounting for 80% of all schemes by assets.  So what are the impacts for holders of these pensions:

1. If your pension is in payment – you will generally be receiving less in your local currency if you are living outside of the UK.  This might be a long-term movement in the pound as the UK economy adjusts to no longer being part of the single market.  If it is a long-term movement you will have to get used to receiving lower payments in local currency over time.  The impact of inflation from a Brexit will be a secondary smaller factor that will require assessment if your pension is inflation adjusted.  With Britain importing most goods and the pound devaluing inflation could push higher (which is what inflation adjusted bond movements are foreshadowing right now), which would be a small gain to offset the loss in local currency.

2. If you’re yet to receive your final salary pension – your Cash Equivalent Transfer Value (CETV) will have gone up.   This may seem perverse but the value of your pension actually increases when yields on Government bonds go down.  And yields have gone down due to everyone in the financial markets piling into assets that they consider safe (UK government backed bonds).  Indeed the initial analysis suggests that the equivalent transfer values of all defined benefits schemes across the UK may have risen by GBP80bn on Friday.

This is not all good news though.  Because the final salary schemes still need to have the assets to pay you this transfer value (and they may not have anymore because a lot of the investments that they are holding to pay you in retirement have probably been pummeled in the market crash following the Brexit vote.)

So if you still have a final salary pension in the UK we would recommend that you review it immediately (particularly in light of the valuation issue).

1. If your pension is in payment – you will generally be receiving less in your local currency if you are living outside of the UK.  This might be a long-term movement in the pound as the UK economy adjusts to no longer being part of the single market.  If it is a long-term movement you will have to get used to receiving lower payments in local currency over time.  You will not get any relief from an increase in inflation in the UK as the payments of the annuities are generally not linked to inflation.

2. If your pension is in drawdown – the amount that you can take now is unlimited under flexi-access.  However, if you were to set a drawdown policy based on Government Actuary Department (GAD) table results the amount that you could withdraw would be reduced due to 15 year Gilt yields falling in the UK.

The value of the payments that you are receiving is going to be reduced in the currency of the country that you are living in.  This is likely to continue in the future.

3. If your pension is frozen – the option of buying an annuity will become even less attractive as they are linked to bond yields.  Bond yields are sinking and so annuity rates are following them down.  The double down on this is that many funds have also dropped in value due to the financial markets movements.  And the final straw is that with the currency dropping you will be in an even worse situation when payments are eventually made.

Part of the reasoning for the United Kingdom’s QROPS regime (which allows pension transfers out of the UK) was the EU pension portability directive.  This could be reviewed as a part of the 2-year Brexit plan.

This means that the HMRC could change the transfer rules back to those of yesteryear when you needed to demonstrate that you were a tax resident of the country that the scheme you were transferring to. This was the way things were before the introduction of the QROPS regime in April 2006.

So what can you do to minimise the risk?

If you have a final salary pension you need to get a review done on the pension immediately.  This is so you can get a guaranteed transfer value (the guarantee last for three months) for your plan and then see if that transfer value is commensurate with the benefits that are on offer.  You need to speak to an adviser experienced in UK pensions to deal with this.

The ability to ride out exchange rates is best done from New Zealand, as once your UK pension funds are transferred to New Zealand you can decide when to convert the fund to New Zealand dollars.  The problem with leaving a pension in the UK and waiting for an exchange rate – is that when it hits your desired levels you then start the pension transfer process (which takes months) and by the time the funds arrive the exchange rate could be completely different.