Residential construction shows no sign of slowing down as new consents hit a forty five year high, pushed up by a strong rise in consents for townhouses in Auckland

Property
Residential construction shows no sign of slowing down as new consents hit a forty five year high, pushed up by a strong rise in consents for townhouses in Auckland 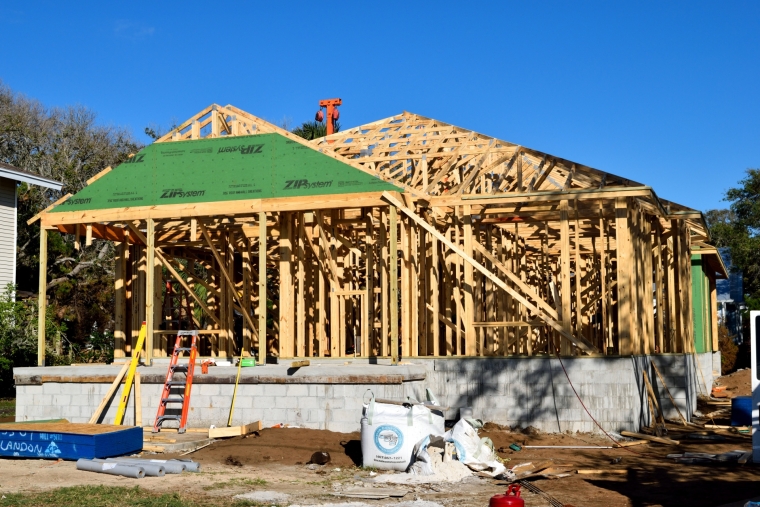 The number of new homes consented in May was at a 45 year high, according to Statistics NZ.

There were 3687 new dwellings consented throughout the country in May, up +8.2% compared to May last year and the highest number for the month of May since 1974.

On an annual basis, 34,672 new dwelling consents were issued in the year to May, up 6.3% compared to the previous 12 months.

In the Bay of Plenty 2004 new consents were issued in the year to May, down 14.8% on the previous 12 months which followed a 7.6% decline in the year before that.

However the current boom in new homes being built may be nearing its peak.

In a First Impressions newsletter on the figures, Westpac Senior Economist Satish Ranchhod said the consent numbers appeared to be flattening off at a high level.

"We think that signals an approaching peak in the nationwide construction cycle and expect that to occur in 2020," he said.

"In part, that's due to the continuing winddown of post-quake rebuild work.

"In many other parts of the country we still expect strong levels of construction activity, but beyond 2020 we don't expect to see the sort of large increases we saw in previous years, and in some regions there could be modest declines.

"In addition, while population growth is currently elevated, migration is past its peak and we expect it will continue to gradually ease back," he said.

It's overshooting just as at the same time demand is falling.

Land price has been falling faster than housing price in Auckland - suggesting that demand still exists and rentiers are feeling the heat.

I wonder how many new homes will be built by craftsman builders, using quality/durable materials??

Or will most new dwellings be ripe for demolition within 40-50 years - with a record of expensive maintenance??

Have to say that when I drive through the bland new-build subdivisions, I have little confidence in what I see......

Give me a solid, older home in an established suburb any day.

Really? I'd say most of the world isn't even thinking about NZ let alone our houses.

Agree, all this crappy cedar cladding 'features' and boxy designs.

The demand is for homes that have some character.
I've seen some great homes made with the latest materials, glazing and insulation but to mirror the character of villas.

I can't see how that additional detailing costs much more - you're still working with straight lines, long run sheet roofing, weatherboards.
It's just a bit of finishing touches, gabled roofs and for God sake put some storage in these houses!

TTP, and yet you are so bullish on the NZ housing market? Something doesn't add up, does it? Low quality, high prices...

...now it all looks like a real panacea to the affordable housing shortage, REA-TTP has (in vain) resorted to blanket questioning the build quality, proceeding to diminish its intrinsic value to first time buyers and is no doubt losing many a nights sleep praying it comes to nothing. If this isn't a blatant attempt to misslead then I don't know what is.

Prices of houses are easing, rents will follow close behind (especially as the economy softens further along with employment).

First time buyers have much time on their side. It's all slowing quite quickly and there's now talk of an OCR of just 1.0% by Christmas (ASB) https://www.nzherald.co.nz/business/news/article.cfm?c_id=3&objectid=12…

Interest rate adrenaline is practically used up now. The real draw card to get buyers over the line is pricing (affordability) of houses. Now, with the absence of the overseas based marginal buyer, we remain some considerable distance from that point of sustainable support.

I gather Tothepoint is blissfully unaware most of these "solid" older homes cladded with weatherboard, brick or plaster, have absolutely no insulation in the walls whatsoever. For those starting out, they can cost a fortune to heat. Thankfully in a buyers market, buyers have the breathing space to sort the wheat from the chaff, be it a new build or old.

40-50 years? They're falling apart after 4 months in Australia.

Do we have any statistics on how long Auckland Council for example takes to approve a consent application ?

I'm wondering how long a lag this is as an indicator.

I'm going through this now (in AKL) and have been told to allow nine months for the subdivision process and getting the utilities to the site. This doesn't include time for architect drawings etc.
I saw a related stat on here a while ago that said something like 95% of subdivided sections have a dwelling built on them within three years of subdivision.

If you answer Glitzy's question (above) to the nearest millennium, that will be close enough.

1955 Birth Year (this is the start of the demographic time bomb which gets bigger from here) reaching retirement age from 2020 onwards.
Bought their first home with their school sweethearts in the mid 1970's during the last major building boom, ( I know interest rates were enormous ) the question is how many will be selling the 1970's family homes to downsize at the same time as all this sparkly new stuff is being built. Some big mortgages out there still for a few of those getting close to retirement
https://www.newshub.co.nz/home/new-zealand/2019/03/elderly-kiwis-strugg…

There is a major demographic issue here Joe. When the 75+ age group need to sell, in ever greater numbers, the ageing of the population means that the prime income demographic (40-47) needs to be numerically equal to the task. This ratio (of the 2) is worsening by the year. I have figures to show the, especially in areas favoured by buyers and residents over 70 (ie hibiscus Coast) key question is: who is going to buy them all? If not enough buyers, inevitably, prices for that band of population selling will drop , perhaps quite dramatically. No one seems to be looking at this point

I guess that all depends on whether John's merry band of men decide to stay or move to Australia for cheaper housing? 2013 arrivals and half the 2014 arrivals would now qualify for citizenship here and a key to the back door of Oz where they have been building plenty of empty houses for them.

I have no doubt the politicians will just open the door wider and wider in an effort to keep the ponzi going. The way msm has let Winston off the hook with his election promises says it all about where their priorities lie.

Sorry to state obvious but the usual meme that supply increase needed to meet demand seems to be contradicted by this:

Auckland sales this year down 24% in first 5m compared to 2018.
So, they are building shed loads more places to live and sales are falling?
Is not the implication of that OVER supply?
Prime example being apartment building in Central Auckland - sorry that we do not know how many extra apartments have been added since 2012 (due to wonderful stat keeping by Stats NZ and Auckland Council) but the sales of apartments in 2012 averaged 176 pcm in first 5m. In 2019 it was 126 pcm in Central Auckland.
Then today we have barefoot stating in its report that central Auckland sales were down from 45 last June to 13 this June. This is classic building over-shoot when cycle, regrettably, has turned. Built too little 2008-2012 and did not get building cranked up fast enough 2012-15 and it all went off boil end 2016 and consensual kept rising. All commentators KEEP repeating that we are short of places to buy and live in Auckland, yet sales have been declining now for 30 months. We need (and here I am repeating myself!) good quality rented homes, preferably 3 bed. But that is not largely what is being built

Yes, I don't believe there's an undersupply, and we are no doubt heading for overshoot. Yet asking prices haven't dropped much yet. A quick perusal of real estate sites reveals that asking prices of pretty average looking apartments in central Auckland is still between $9000 and $10,000+ per square metre! In world terms, this is VERY HIGH (even after converting currency to US dollars for instance), even for bigger and booming South East Asian markets with economic growth way above NZ. Something's got to give.

Here are some figures showing ratio of Auckland and HC (Hibiscus Coast) over 65s to those aged 40-64 and why it matters. The figures are from stats NZ and ACC. I did this analysis in 2017. Auckland Council produced a report in about 2016 showing how much the over 65 grip was going to increase by 2030, compared to other age groups. I do not have it to hand right now, but it should be easy enough to track down.

The ratio of number of people aged 40-64 relative to those 65+, is important because the lower the ratio, the fewer the buyers available and looking to buy. Too many single older people in large houses restricts number available to younger families needing them.

And then there's always the netting off: the Big Yellow Digger driven through one rotten (but rented) villa so a Minus One, to the X new 'dwellings' erected on the same site.

Well, with the state house/kiwibuild(?)/social housing round my way, its -2, then +6-8 houses or in the case of one bit of the development, its going to be -2 old state houses, +23 one and two bedroom units. So yeah, it might not be as big an expansion as the headline numbers, but it will be significant.. if they get built.

Is there any data as to who is behind them?
ie. HLC/Kiwibuild/State housing and social housing providers vs the general market?

I don't think the Stats NZ data shows it, but council's does. Their June report on housing shows that in April, 14% of dwellings consented were HLC / state.

Thanks, thats interesting.
Just shy of 1500 consents for TRC/HousingNZ in the last 12 months in Auckland.

Interesting statistics for the May building consents. Waikato is consenting one dwelling per 117 people, Auckland 119, Nelson 123, and Hawkes bay 245. Auckland is not the only place that has busy builders. Just try getting a plumber in Nelson. It is easier to find a medical specialist.

Another loophole for property speculation is closed. Government has ended negative gearing. The law was passed last week. Now, speculators can not offset their property losses from income elsewhere.