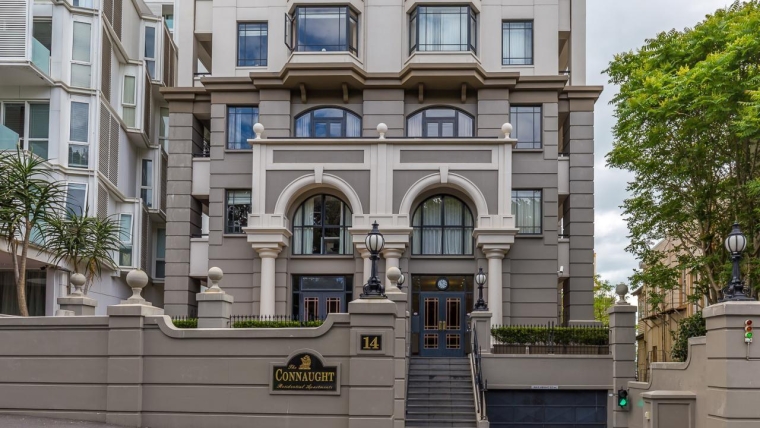 The Connaught apartment building in Auckland.

There has been a surge in the number of Auckland apartments with remediation issues coming up for sale at auction recently, and there's both good and bad news for their owners.

The good news is that, perhaps surprisingly, there's good demand for these types of apartments, resulting in competitive bidding at auction.

The bad news is that they are selling for hugely discounted prices.

The most common remediation issue is leaky building syndrome, meaning the building concerned will usually have to be reclad, but it can include a host of other problems as well, ranging from electrical and plumbing defects to fire safety issues.

Buying these types of properties is not a game for the faint-hearted.

But there are other risks to consider as well.

Additionally, these properties are nearly always purchased by investors, and once a building is covered by scaffolding with workmen crawling all over it, its attractiveness to tenants is considerably reduced.

So investors need to be prepared for extended periods of vacancy and reduced rental income while the work is carried out.

Some buildings need such extensive renovation work that they have to be completely vacated, sometimes for up to two years, leaving apartment owners with no rental income during that period.

And there's no guarantee that once the remedial work has been completed that other problems won't be discovered.

If a building was so poorly constructed that it couldn't keep the rain out, what are the chances that it will develop other problems at some stage?

It is not unknown for apartment buildings to have gone though two or even three rounds of remediation work.

So it's hardly surprising that the banks won't lend money on buildings needing remediation work.

Which limits the pool of potential buyers ready to take a punt on them to those with ready cash.

At the latest apartment auctions conducted by Auckland agencies Ray White City Apartments and City Sales, 15 apartments in total were offered and nine of them had remediation issues, which gives some idea of the scale of the problem.

However seven of the nine that had problems were sold under the hammer, which is a clearance rate of 78% and bidding was quite competitive on most of them, suggesting there's no shortage of cashed up investors who believe the risks of buying such properties are worth taking.

But of course they are buying at savagely discounted prices.

Rating valuations for Auckland properties haven't been updated since 2017, but most of the remediation apartments selling at auction have been going for around half to a third of their 2017 rating valuations, some for less.

Here's how prices looked for the seven that sold at the latest auctions:

Details of the individual properties offered at all of the auctions monitored by interest.co.nz are available on our Residential Auction Results page.

they cant all be that stupid so it must be a tax avoidance strategy by investors,to claim losses against other spectacular gains pushing them into higher tax brackets.

I can't see that flying with the IRD, it would be factored into the "reason it was cheap" and therefore a capital cost

cant you capitalise the remediation cost,and claim it as repairs and maintenance?

Losing money to avoid paying tax is stupid. It is possible that tax is driving this as if they can get them fixed for a reasonable price they could be good as the rent will be relatively high compared the the value of the property and the running costs will be tax deductible.

Probably the government buying them for housing the poor...

If it was the government they would be paying well over the CV value regardless of the risk.

... probably West Coasters buying .... if you're from Westport , a little leaking is just a weekly occurrence ... put a few plastic buckets around the apartment ... solved !

There has to be some way of buying one and not be liable for the remedial work. The cost of the work could quickly outstrip the resale value and personally I still wouldn't touch anything that's been reclad anyway. Your pouring money into a lost cause that will always have bad history. Its a demo job and start again. I wouldn't buy it for $1 unless you could just live in the leaker for years, delay getting it fixed and then do a runner.

Might be worth it if you just want the car park.

You can still buy a carpark in the CBD for $100K and its solid concrete and the only remediation might be a bit of white paint down the sides of it. A leaking apartment is an unknown liability and not something you can fix yourself. I would prefer the masking tape, a paint brush and a tin of white paint option every 10 years.

A leaky single storey home is one thing. A leaky multistorey apartment is quite another... Buyer beware

"The bad news is that they are selling for hugely discounted prices."

Why is it bad news that a hunk of junk is selling for a discounted price?

An average of 58.7% discount based on 2017 CV with a rental yield between 6 and 7%. It will take a very large remediation cost overrun to effect a loss.