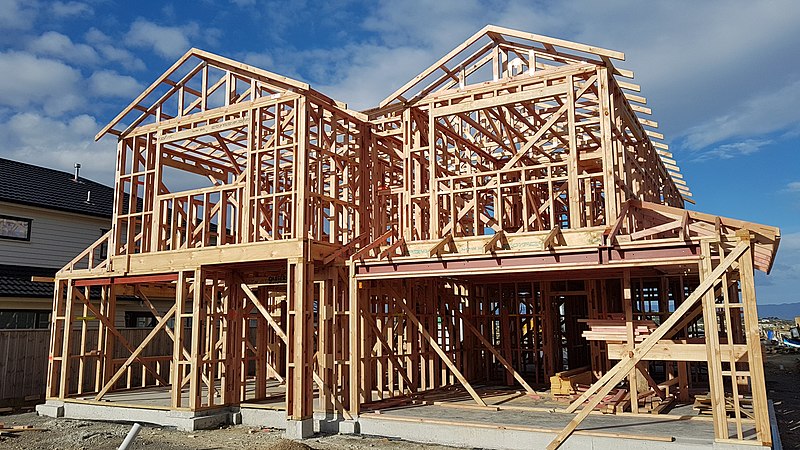 Average residential building costs rose 4.3% over the 12 months to the end of September, although costs for some types of dwelling increased by up to 8.0%, according to interest.co.nz's analysis of Statistics NZ's latest building consent figures.

That's an increase of $103 per square metre (4.3%) over the year, which would have added an average $5621 in additional building costs per dwelling, based on the average size of 152 square metres.

Over the last five years the average size of new dwellings consented has declined form 178 square metres to 152 square metres.

The biggest increase in construction costs over the 12 months to September was for townhouses and home units, with the average cost per square metre increasing from $2214 to $2391 (8.0%).

However the increase in their average build cost per unit was contained at $4923, largely because the average floor area of townhouses and home units declined from 115 square metres to 108 square metres over the same period.

That combined with a 7.3% rise in their average construction costs saw the average building cost for stand-alone houses increase to $479,271 in the September quarter, up $42,118 (9.6%) year-on-year.

Apartments remain the most expensive type of new dwelling to build at 3187 per square metre, although the apartment numbers are extremely volatile making it difficult to discern trends in their numbers.

Retirement village units remain the second most expensive type of dwelling being consented, both by size and by build cost per square metre, suggesting their developers remain focused on the top end of the market.

The average size of new retirement units consented over the last five years has increased from 110 square metres to 127 square metres.

The tables below gives the average dwelling size and build costs for most types of new dwellings and how they have changed over the last five years, based on Statistics NZ's building consent figures.

There are separate tables showing the trends for the entire country and regional tables for Auckland, Waikato, Bay of Plenty, Wellington, Canterbury and Otago.

Figures for apartments and retirement units have been excluded for regions where their numbers were very low.

The tables will be available under the heading Residential building consent analysis in the drop down menu from the property tab in the subject bar near the top of interest.co.nz's home page and will be updated quarterly. 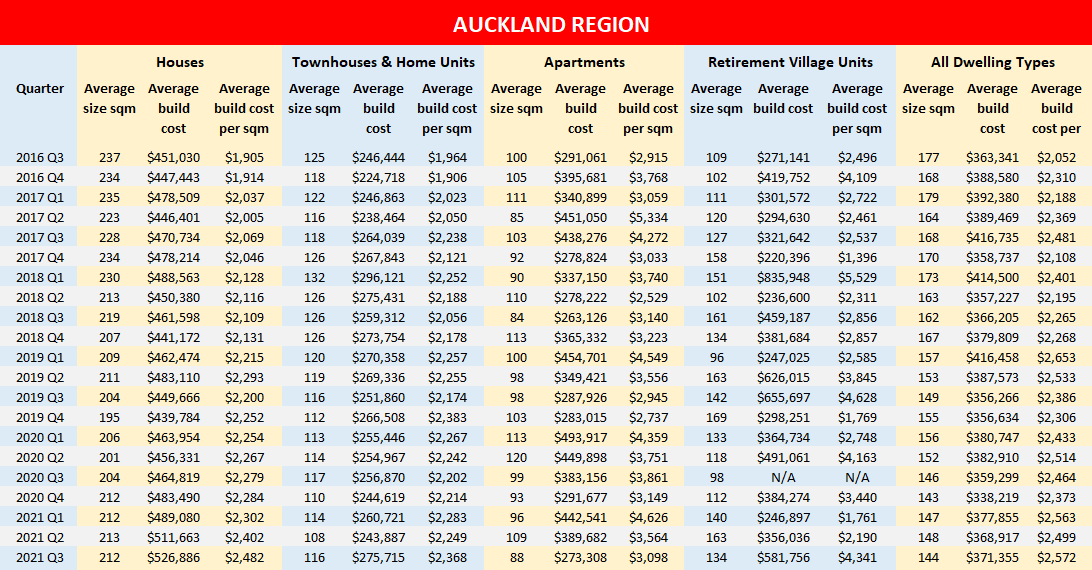 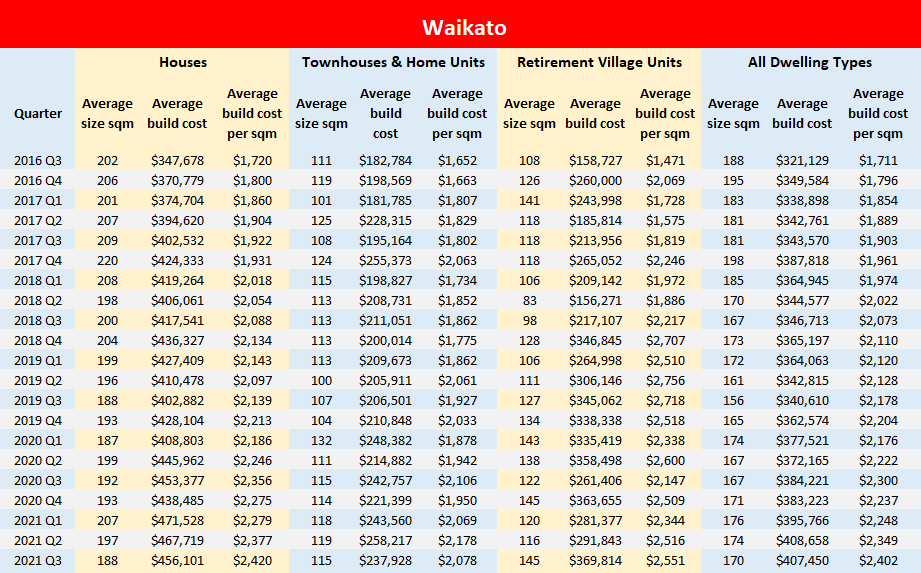 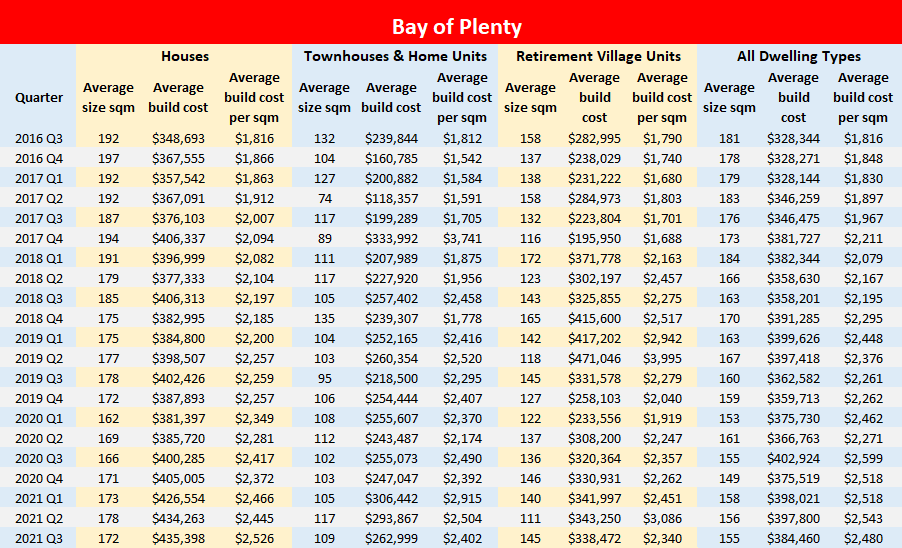 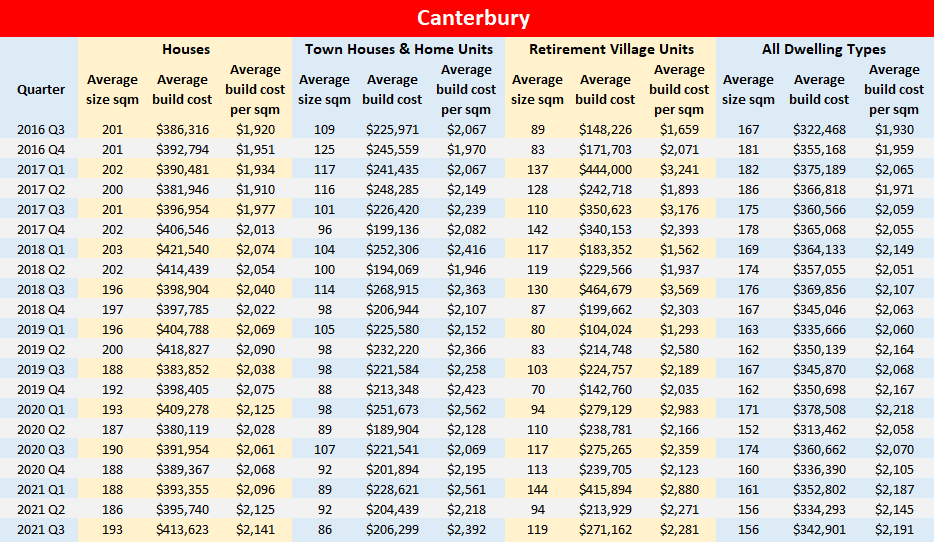 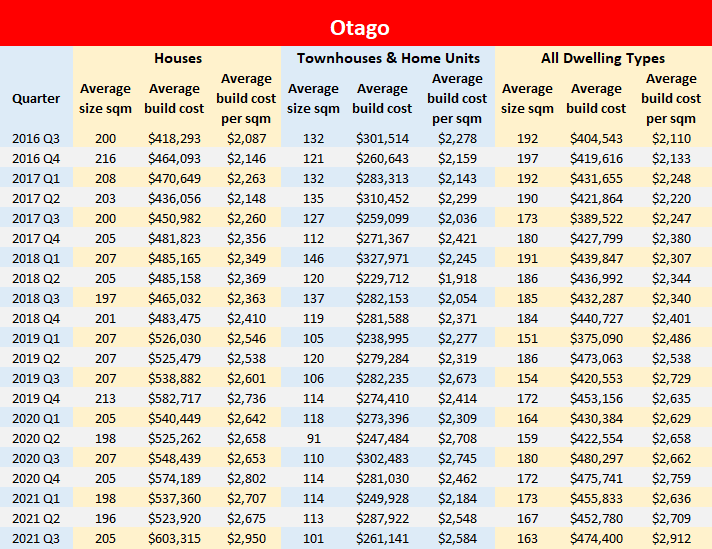 I say old chap, with building costs climbing at this rate, Fido will need to make room for me in the kennel......

Living in unaffordable shoeboxes is a small price to pay for all the "diversity" and "vibrancy" that the mass immigration project delivered.

Quite bad even for a strawman argument.

He always seems to bring out the race card and project it on others even though nobody is even thinking that in their reasoning for at least wanting a immigration policy which doesn't overwhelm infrastructure yet brings benefits for the country such as in demand skills etc...

Nothing to do with race. And there wasn't really a problem with immigration in regards to housing/infrastructure until Clark started the family reunification followed by Key opening the floodgates.

Steady on. My English forefathers brought you blankets and muskets. And influenza and smallpox. Gentlemen, the Queen (raise glasses).

Are we likely to be too different? What an absolute mess we've made of this.

Yip, dudes be pissing it up wayyyy longer these days.   Not going to think about having a baby, married owning a house until at least 34. Throw another shrimp on the barbie and pass the goon bag my way maaaattte  ......    glug glug glug

This is excellent news for house prices. Developers will be bailing out on turn-key buyers.

And apartments just north of 3k? add at least $1500 for low rise (3 storeys), much higher for taller buildings.

I remember reading an article about a study a couple years back stating that building costs (i.e.  materials, labour, etc) where more passengers of housing prices than drivers.  As in if they are going up then a lot more people start punching the ticket, but they also pull back back dramatically in a downturn.  So they aren't much of a floor.  If i can find the article I will link it.

I believe inflation is clearly under the mandate of RBNZ, if analysts want to give the excuse that this I world wide issue and they have no control.

In that case, they should step down and hand it over to someone who can take action either in NZ or out of NZ if it is not controllable by the current lot. Everything is expensive this govt is pushing kiwis to live on bread and Milk. Shame

Yes, they have the inflation mandate, but can really only control money supply driven inflation.  As a crowd of administrators I don't know what they are going to do about imported inflation and supply change disruption.

Money tap is open in full throttle, money is never that cheap as today .50 Basis points from here it can only go to negative if you want to lose it more.

I am not an economist but if the money supply is reduced the demand will decrease and things will be available not at the price which we are paying today.

The economy will not boast to the level it is now but then people will be less indebted.

Steel, aluminium, copper up 25%. and that's before you start turning it into colorsteel, cable or windows.

And MBIE haven't even started on the new insulation which will probably require thicker external walls.

"And MBIE haven't even started on the new insulation which will probably require thicker external walls."

that'll be an interesting one. With the current stud 90x45 stud and the next size up 140x45 the cost of wall framing will jump quite considerably. Don't have a handle on framing costs as a % of overall build but  all these incremental % increases will add up.

I think the max R value in a 90x45 frame is either 1.8 or 2.2. Increasing to 3 or so may only marginally improve thermal efficiency and not warrant the additional capital cost. Some number crunching required here. Not Labour or the Green's forte'.  But wait if we throw in some horrendous climate change numbers say 2.5deg up in summer and -3 to -5deg down in winter over the next 50 years it could well become economical. Now to adjust the model inputs and the numbers will no doubt  show its economically viable.

This will surely assuage ones green conscious and swallow any additional costs to reduce the carbon footprint.

Next we'll be having a new mud adobe building standard with thatched roofs to replace 3604 for timber framed buildings.