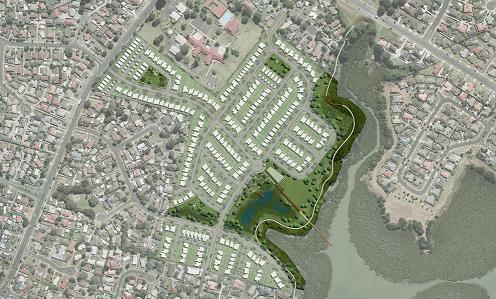 It involves 282 social and affordable homes on surplus Government land at Weymouth in South Auckland.

While planning of the project has apparently been under way for some time it is being styled as the first project under the auspices of the new Auckland Housing Accord between the Government and the Auckland Council.

The accord came into effect this week. It targets the building of 39,000 new homes in the Auckland region over the next three years.

Key to the accord will be the designation of "special housing areas" on which developments will be fast-tracked.

The council's believed to have decided on the first tranche of special housing areas at a meeting of its governing body (basically the whole council) last week, though it has yet to officially announce the areas - other than confirming Weymouth as one. Further announcements on special housing areas are expected this month.

Housing Minister Smith has said he hopes to have sites that could have about 5000 houses on them approved by Christmas. See here for housing accord articles.

He said the "exciting" South Auckland development involved both the Government’s social and affordable housing reforms and would help 113 families into their first home.

"It will also expand the provision of community and social housing by 169 units."

The Government is investing $29 million from the Social Housing Fund into the $102 million development to enable the consortium led by Ngā Mana Whenua o Tāmaki Makaurau (the Tāmaki Collective), along with members of the Auckland Community Housing Network, including the New Zealand Housing Foundation, CORT Community Trust, the Auckland and Onehunga Hostel Endowment Trust, and Habitat for Humanity, to deliver 282 social and affordable homes. A Heads of Agreement has been reached and contract negotiations are expected to be completed later this month.

"This Weymouth development, which will house 1250 people, will also be the first Special Housing Area under new legislation and the Auckland Accord. This will enable the 16-hectare subdivision of vacant Government land to be fast-tracked, with the first homes ready for occupation by the middle of next year and the entire development completed by 2017,” Smith said.

Mayor Brown said.the Weymouth development was the "first example" of how the Housing Accord would enable the fast-tracking of more homes in Auckland.

"It also shows the potential of working in partnerships with the third sector. These organisations are the real champions of housing in our communities, and the work they do will help to improve the lives and opportunities of Auckland families who may otherwise struggle to find suitable housing,” Brown said.

The Government-owned land is being sold for $8.9 million. The development is being funded by the Social Housing Fund grant, investment by the community social housing providers, and sale of the 113 private homes.

The housing sizes match shortages and are focused on smaller two-bedroom units and larger four-and-five-bedroom homes. The development also includes 3.7 hectares of parks and reserves.

Smith said  the community-owned homes in the development would help to house high need families as part of the Government’s social housing reforms.

The affordable homes, priced between $325,000 and $475,000, would be made available through rent-to-buy and assisted home ownership programmes to first time buyers on low-to-modest incomes, Smith said.

"This new development shows how the Government’s housing reforms are delivering real results for families in the highest areas of need,” he said.

xing - not really worth the risk when you can just buy existing housing stock and make a similar or possibly better return. We need developers to make good profits or development won't happen. There's a lot of risk involved.

No developer would get funding with a 10.5% expected profit. Too much risk.

The land value works out at average $32K/section. Now with roads, parks, sewers, watermains, street lights, etc - what does the affordable section price turn out to be? Also, section size works out to about average 300m2 allowing  50% for roads,footpaths, berms.

I trust that investors, especially foreign ones will not be allowed to get their sticky fingers on any of these houses

Should one not be in the position to *buy* a house but rather need one to rent, an investors fingers may not seem quite so sticky as you propose.

What's the use of building affordable houses when the typical buyer can't get a loan?

Who are the developers going to sell to if they don't have the necessary 20% or $80,000 deposit?
To save up $80K after tax is a big ask for anybody, let alone a first home buyer.

$325K-$475K is much more than existing houses in next door Clendon park which is closer to town and had prices slowly decreasing for years.

And how many people in South Auckland have jobs that provide sufficient income to pay for the so-called "affordable housing"?

More likely cash rich property investors will buy up these properties and the government will be saddled with a further burden of needing to provide subsidies to landlords under the Accomodation Supplement scheme, which already costs the government over a billion dollars a year. Nice freebie for investors.

... and tell the buggers to mow their own berms ... if they don't have enough pride to keep their " affordable " property neat & tidy , we'll set up houses on the berms ....

... alike Chief Inspector Jacques Clousteau ( Pink Panther films ) , one must respect the power of a berm !

Probably because your Filippino friends don't have anything different to compare it too. Just plenty worse circumstances experienced by the slumdwellers.

... I shall let that pass , since you cannot possibly know who's leg it is that you are pushing ...

Anonymity is a virtue . Any fool knows that . Anonymity is next to cleanliness , and I don't have to tell you what that's next to .

But using the lower range of price $325K, and comparing that with Barfoot;s puff piece where the new median or is it average is quoted at an incredibly precise $657,912 (may have transposed some figgers here, under the influence of 3 Leffe Blondes).

Does that not work out to less than half price?

It might be 1/3 of the price of a house in central suburbs - but is more than similar houses in the same suburbs of Weymouth/Clendon Park:

Its basically a social housing development site which is what Auckland does needed.  Families on income support should be able to get a house for $60 to $100 dollars a week based on their living wage.  This should help some people out at least.

It's pushing those families to unseen fringe suburbs no one cares about where they'll have huge transport costs on top of their rent.