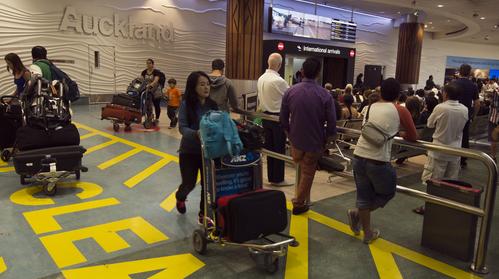 High net levels of net immigration into Auckland are the 'major swing factor' for housing activity and could 'significantly' bolster housing demand in the Auckland region this year.

This is according to Auckland City Council chief economist Geoff Cooper in his latest Auckland Economic Quarterly publication.

Cooper said that in the 12 months to February net migration into Auckland totaled 13,709, which was a decade high.

"The strength of net migration through 2014 will be an important influence on economic growth. The boost to population has immediate implications for housing demand, labour supply and consumer spending and will also put additional demand on the region’s physical and social infrastructure," he said.

"...Net migration could prove to be the major swing factor for housing activity in 2014. There were 9785 additional net migrants in the year to February 2014 compared to the previous 12 months, which equates to around 3000 additional households (based on average household size from the 2013 census) or half of the 6361 [new housing] consents issued over the same time period.

Although employment growth in the region had become more broad-based, the upswing in housing activity had been key to driving the upturn, he said.

"Housing activity has continued to gain momentum, with volumes of work 17.9% higher year-on-year in the December quarter of 2013."

Cooper said in the first two months of 2014, house price growth remained solid, but house sales continued to weaken due to the Reserve Bank's introduction of 'speed limits' on high loan-to-value lending.

"The LVR limits have significantly reduced demand for housing but solid activity at the upper end of the market has propped up house price growth. Meanwhile, rental inflation remains contained, running at 2.9% in February 2013. High net migration numbers are boosting housing demand and household incomes are also strengthening, but the combination of the LVR limits and rising interest rates will have a dampening effect."

Cooper said there was scope for Auckland households to loosen their purse strings this year.

Stronger wage growth would emerge as the economy strengthened and the labour market tightened, while debt servicing ratios were low compared with the pre-global financial crisis era.

"However, consumers may remain reluctant to supplement incomes by running down their savings or increasing debt levels; and the Reserve Bank, wary of a build-up in debt-to-income ratios, may be reluctant to let them try.

"Household spending has also received a boost from high net migration levels. Assuming monthly net migration numbers average 1000 persons a month for the four months to June, the pick up in net migration over the year to June 2014 would have contributed an additional 0.7 percentage points to nominal retail spending growth (assuming constant 2013 per capita spending levels)."

Cooper noted that the region's unemployment rate dropped to 6.3 per cent in the December quarter, its lowest level since 2008. Employment growth was broad-based with housing activity a key driver of demand.

The strong result came despite a significant boost to the working age population from record net migration numbers and a pick up in the participation rate, which was now back around its long term average rate. The process of absorbing excess capacity that constrained employment growth through 2012 appeared largely complete and job vacancies and surveyed hiring intentions pointed to a further strengthening in labour demand in the near term.

"Looking ahead, the strong employment growth result for 2013 comes off the back of a particularly weak 2012 outcome (as registered by Statistics New Zealand's Household Labour Force Survey data) and was underpinned by a strong upturn in housing activity and a firming in household spending.

"Excess capacity has now been largely absorbed and businesses have been taking on additional labour to cater for projected demand, but the outlook for employment growth is very much dependent on the strength of domestic activity– particularly housing activity and consumer spending–going forward.

"Three factors which will play a key role in determining the strength of employment and economic activity through 2014 will be net migration, consumer confidence and inflation: sustained high migration levels and a less cautious household sector could drive strong spending and employment outcomes but, with inflationary pressures on the rise, this could well trigger a more aggressive interest rate tightening phase.

"On balance, the outlook is for solid employment growth and a further decline in the unemployment rate through 2014 back towards 5 per cent. However, there are plenty of upside and downside risks to this outlook–both domestic and external," Cooper said.

So the council is well aware of the incresed demand for housing but has no plans to free up land (other than that forced upon them by central government) to house new arrivals.

Perhaps then we should set a net permanent migration target, and use residency & visa acceptances/rejections to achieve that figure - keeping net migration at much more consistent levels.  Much like Reserve Banks setting target inflation rates and using OCR's to achieve them.

Steady levels of net migration are quite healthy to an economy.  Even those who despise migration must consider it to be more healthy than the effect of population declines (say, Japan).

And from what I understand this is actually able to be implement - even if the b'crats at Immigration tell you otherwise.

It's interesting that we all know how our economy can only work with continual growth as your comment about Japan suggests.  Most of us also know that we can't grow forever. Yet the idea of transitioning to a steady state economy that doesn't require growth is seen by many to be crazy.

We are all dead in the long-term

From Treasury, its not all jolly hockey sticks....
There is also some evidence that immigration, together with other forms of population growth, has exacerbated pressures on New Zealand's insufficiently-responsive housing market.
http://www.treasury.govt.nz/publications/research-policy/wp/2014/14-10

New Zealand immigration policy settings are based on the assumption that the macroeconomic impacts of immigration may be significantly positive, with at worst small negative effects.
However, both large positive and large negative effects are possible. Reviewing the literature, the balance of evidence suggests that while past immigration has, at times, had significant net benefits, over the past couple of decades the positive effects of immigration on per capita growth, productivity, fiscal balance and mitigating population ageing are likely to have been modest.
There is also some evidence that immigration, together with other forms of population growth, has exacerbated pressures on New Zealand's insufficiently-responsive housing market. Meeting the infrastructure needs of immigrants in an economy with a quite modest rate of national saving may also have diverted resources from productive tradable activities, with negative macroeconomic impacts.
Therefore from a macroeconomic perspective, a least regrets approach suggests that immigration policy should be more closely tailored to the economy's ability to adjust to population increase.
At a minimum, this emphasises the importance of improving the economy's ability to respond to population increase. If this cannot be achieved, there may be merit in considering a reduced immigration target as a tool for easing macroeconomic pressures.
- Len's demonstrated views accepted/aside, we find the work of Treasury of interest, while Auckland Council less so.

Only have to ask a farmer what happens when you increase stock numbers ;-) they could have got that advice for free.

Loved the theory....Henry.
The practice, not so much.
When they get it perfect, maybe Treasury could inform, one and all.
I think they missed a few people out of the ball park...New Zealanders...millions of them.
They say practice makes perfect, maybe next time...eh.

I will add another observation.

We pay these idiots. Big Time.

To our mind the Councils are turning (rather servant master, its more virus host).
The slack jawed approach to urban planning over the past years is before us for all to see. The otherwise servants now seem to imply its our fault that they have performed as they have.....
The "solutions" of more debt (taken by local authorities to be paid by us) and more immigration by cash buyers are not new, rather a front to continue of whats gone before (ie. the party runs on...).

http://www.youtube.com/watch?v=DPN3ZKlqrrg
... and you're leaving out the window

3 mill pop in Auckland would be an ideal number.