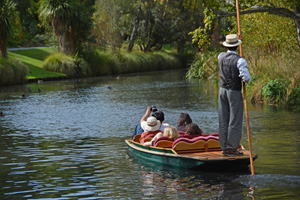 Punting on the Avon River in Christchurch Image sourced from Shutterstock.com

There are increasing signs that the supply and demand for houses in Christchurch in starting to get back into balance as increasing numbers of new homes come on to the market.

The December figures do not appear to be an anomaly.

The table below shows Harcourts' Christchurch sales figures for the six months from July to December last year.

It shows that the number of sales and average prices have remained within a fairly tight range over that period while the volume of homes available for sale has steadily increased.

In each of those months the number of homes available for sale was between 24% and 33% ahead of what is was in the same month of 2013.

"There was further evidence this month that Christchurch Metro is starting to achieve equilibrium between supply demand," Harcourts said in its December sales report.

"Indications are that buyers are delaying their purchasing decisions as they benefit from more choice in the market."

Harcourts figures are a particularly important indicators of trends in the Christchurch market because of the dominant position it holds there, handling around half of all housing sales in the city.

However recent figures from the Real Estate Institute of NZ (REINZ) and Quotable Value (QV) also suggest the Christchurch market is starting to return to more normal trading levels as the city recovers from the devastating effects of the 2011 earthquake.

QV's figures for December showed that average housing values in Christchurch (for all homes in the city, not just those have sold recently) in December 2014 were up just 3.2% compared with a year earlier.

"Value increases in Christchurch City have slowed somewhat as the number of homes repaired increases and new homes coming on to the market is seeing supply keeping up with demand," QV said in its December market report.

According to the REINZ the median price of all homes sold in Christchurch in December was exactly the same as it was in December 2013, while the number of homes sold was up 23% on the same period.

"There was good activity in the Christchurch market in December, with the increasing number of new builds coming to the market providing more buyer choice," REINZ regional director for Canterbury Tony McPherson said.

"This improving supply to demand balance is furnishing the market with a more normal feel."

Yes a slow down overall but the right ares are still showing good capital gain in the past year, small pockets thou. Closer in, superior neighbourhoods, still do well, major sell off in Rangiora etc. as people try to move back into the city...sick of the hassell  of driving the Northern.

Only a matter of time before the ChCb market tips over. Prices and rents will return to pre-quake norms. Wait for the uproar when market values drop below the recently ramped up council RVs.