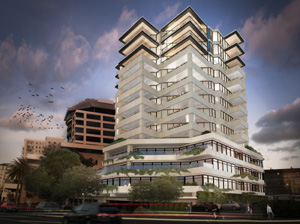 How the Hopetoun Residences building will look when completed.

All 91 apartments have been sold six months ahead of completion in Tawera Group's conversion of the former Baycorp office tower on Hopetoun St on the fringe of Auckland's CBD.

Prices for the apartments in the building, which will now be known as Hopetoun Residences, started at $520,000 for a 63 square metre one bedroom unit, with 70 square metre two bedroom units starting at $650,000 and the most expensive unit, a 230 square metre penthouse with a 100 square metre deck, sold for $2.5 million.

The conversion work included building balconies onto the existing structure and the north facing apartments in the tower will have spectacular harbour views, while most of those on the south side will look towards Mt Eden.

Tawera Group has been involved in converting several commercial buildings into apartments and its other projects in Auckland include 132 Vincent St and the Hereford Residences.

The apartments in the Hopetoun project first went on sale at the end of 2013 and the final 11 apartments were sold in December last year.

Trent Quinton of Bayleys Real Estate which were the sales agents for the project, said most new apartment developments still had about 20% of their units available for sale by the time they were completed, so by selling out six months ahead of completion, Hopetoun had outperformed the market.

Tawera Group director David Mahoney said the sales success at Hopetoun had reinforced the company's strategy of focusing on urban renewal sites in prime locations that were close to transport links, retail precincts and places of work.

"Almost all of the buyers were empty nester couples whose children had recently left home, or a few couples aged in the 60-80 year age bracket," Quinton said.

"There were only a dozen or so professional couples in their 30s who had purchased and more than 80 per cent of buyers were owner/occupiers."