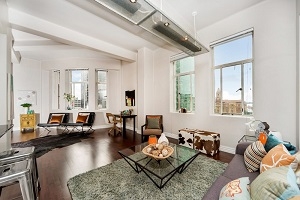 This apartment in the historic Dilworth building sold for $660,000.

There was a strong turnout at this week's Ray White City Apartments Auckland auction with most of the units on offer being of a size and quality that could appeal more to owner-occupiers than investors.

There was competitive bidding on all five apartments put under the hammer, one that had been purchased in December and given a makeover before being put back on the market, a luxurious apartment in the landmark Dilworth building on the corner of Queen and Customs streets, a couple of leasehold units on opposite sides of the CBD and a unit in the historic Heritage Farmers building.

The Dilworth apartment was a corner unit with views of the Ferry Building, 94 square metres of space and plenty of character features such as a high stud and polished wooden floors, and with the advantages of a modernised kitchen and bathroom.

It was one of the two apartments that sold under the hammer with the other three being passed in for sale by negotiation.

The full results are below:

Our free Property email newsletter brings you all the stories about residential and commercial property and the forces that move these huge markets. Sign

Great tips about better quality apartments.We are providing the best students assignment writing help and we are offering law essay writing service and all type of essay at cheap price.