Big increases in new listings and average asking prices on Realestate.co.nz in February

Big increases in new listings and average asking prices on Realestate.co.nz in February 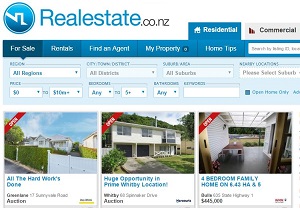 There was a surge of new residential property listings on Realestate.co.nz last month, which should help free up the supply of homes for sale.

That was also up around 50% on the 8011 new listings the website received in December and the 8144 in January.

Many agents have been reporting a shortage of listings which has left some potential buyers struggling to find properties that suit them, so the rush of new listings should help ease those pressures.

In Auckland where there is a shortage of homes and supply pressures are greatest, there were 4202 new listings on Realestate.co.nz in February which was slightly up on the 4142 in February last year and the highest number of new listings in the month of February since 2013.

In the Bay of Plenty where the market has been receiving an overflow of unsatisfied Auckland buyers, particularly investors seeking higher rental yields than are available in Auckland, 806 homes were newly listed with Realesate.co.nz last month, up 15% on the 729 new listings in February last year.

There was also a jump in average asking prices on the website last month.

The national average asking price (seasonally adjusted) was $565,861 in February which was up 4.3% compared to January but still below below the all time high of $568,215 set in August last year

However the average asking price in Auckland hit a new all time high of $866,080 in February, up 4.5% compared to January.

That may suggest that there could be more properties in the mid-to-upper end of the market being listed for sale and the supply of mid-to-lower priced properties might remain tight.

See the charts below for the number of new listings and average asking prices in all regions of the country.

This will be the headline for mainstream media:
"The average asking price in Auckland hit a new all time high of $866,080 in February, up 4.5% compared to January"

Wow that translates to 360% for the year according to ex-agent's calculator.

I see the Herald is on it:
Asking prices in four areas hit record highs
http://www.nzherald.co.nz/property/news/article.cfm?c_id=8&objectid=1159...

The Bay of Plenty market is receiving an overflow of unsatisfied Auckland buyers, particularly investors

They (the industry and scribes and those in the know) can't tell us who was buying up Auckland property and where the pressures were coming from but we get detailed information (within the month) about the identity of buyers in BOP and where they are from, and the nature of their purchases (investments)

Nice catch! I'm pretty much disgusted with the media. You catch one lie, how many more do you miss because you weren't paying attention? Forget the latest technology, were already living in a virtual reality, based on lying about anything and everything. Psychophantic media, pandering to the elites, and filtering what we hear for their own benefits.

a) I dont go near the conventional media, as far as I am concerned they are just shades of fox news.
b) try and check items from 3 or 4 independent sources I trust and do a bit of depth especially if there is disagreement just to make sure.

Talking to agents in Hamilton, some have said to me that (for a particular property) out of ten calls, eight are from Aucklanders. Most of the properties I've inquired about have been like this! If you talk to a big enough group of agents you get a good picture of where the demand is coming from. The same will be true of Tauranga. So, whilst not a scientific approach I think "they" are doing the best at reporting what "they" have heard.

The yields in Auckland are so low it is not surprising investors are going to other areas. There do appear to be a lot of baby boomer family properties coming onto the market as that generation downsize.

'In Auckland where there is a shortage of homes.' Again more Ninness drivel. Absolutely brainwashed . There is absolutely no factual data to support the case that there is a housing shortage in Auckland. It is almost like every spruiker/ vested interest is given the same toolkit and all appear to be down to the last tool

Possibly you are not involved with development in Auckland Pat. There is no question that there is a shortage amongst everyone I talk to. These people are, you could say, some of the key people with the best view of the "real" picture.

When I hear people denying a housing shortage in Auckland, it reminds me of the climate change deniers.

Look back at how long a shortage has been claimed. Look at number of units built since then. Look at immigration figures. Try to get finance to do a development. Try to make the numbers stack up on a development. Try to go through the planning process. Talk to people directly involved and listen to what they say. It's very clear the housing shortage is real.

Given the extremity of this housing shortage, I find it weird that I haven't had a rent increase in three years, and I can still find easily find flats for rent in my suburb for less than I'm paying now. I also can't help but notice a stubbornly continuing lack of people living in tents or on the streets, unable to find a roof to put over their heads.

Answer me this: as long as investors continue to view the Auckland housing market as a safe and profitable place to park their money, how many new houses will be "enough"? Why wouldn't you, as a rational investor, simply continue to borrow and buy more houses no matter how many new houses are built? What's the magic number of new houses we need before the first home buyers stop getting squeezed out by you and your mates? I'll pre-emptively answer for you: there is no number. The housing shortage will magically "end" when immigration falls, interest rates rise, or economic fundamentals deteriorate, and all of a sudden people don't feel confident that they'll be able to turn a profit out of our domestic housing supply. Not before.

jimmyjohns, there's a limit to how much finance I can get. Also, I'm investing for long term rental incomes, not capital gain per se so this drives my investment decisions. But yes, as I can get more finance I buy more. Right now I'm focused outside of Auckland because yields are better. There is no shortage of people seeking capital gains who don't seem to look at yields though.

Based on what smarter people than me have reported I would say if 30,000 houses minimum appeared overnight the shortage would be over. Of course this would result in a decline then flat-line of prices for many years.

Machiavelli, name the key people that you talk too. Who claimed there was a shortage way back when. When was when. ? Present your facts.

Cowpat. Google "Auckland housing shortage 2013" and you will see a raft of articles and information on this.

Here's a report by the RBNZ from 2013 - http://www.rbnz.govt.nz/-/media/ReserveBank/Files/Publications/Speeches/...

"We agree with most commentators that the key underlying issue here is
a chronic housing supply shortage..."

I can't name my sources sorry but it's not like I have special agents with secret knowledge. Talk to key people in council, government, developers, consultants, financiers etc and you will also hear what I hear day in day out.

Machiavelli citing a RBNZ speech by Grant Spencer in 2013 to the property council to argue a housing shortage in Auckland as if it gives your argument credibility is amusing. In terms of credibility, no Reserve Bank globally has undertaken such a wide range of ill conceived policy mistakes whether related to LVR or OCR settings in recent history. In terms of fact, every housing shortage article including the one you have outlined from 2010 up to October 2013 was based upon a population growth in Auckland that was consistent with the previous two census periods. When the initial census figures were released in October 2013 , for the period 2006-2013 not only had Aucklands population growth slowed , it had in fact only increased at a rate fifty percent of that estimated. At which point the vested cartel included the wonderful Tony Alexander , leader of the rat pack simply changed tack . At the end of the day the majority of Aucklanders are spoon fed reality shows and real estate drivel by the likes of yourself who cannot understand that you are simply within a Ponzi scheme.

Thanks cowpat. All really interesting points. Nevertheless disregarding what all these experts are saying because "I know better and they are all fools" doesn't present the strongest argument. Hey, there's no law against having an opinion though so good luck to you.

Based on that logic there is a massive shortage of burgers from Macca's, everytime I go past the place there is a line up of people wanting to buy them, for the sake of all that is good pleeeaaasse build more burgers!!!!!!!!!

As a quick aside. The rise and rise of Air bnb has taken at least 500 homes/apartments out of the normal rental market. With some of the returns available it might even be a viable short term business option - rent auckland homes, furnish them, air bnb them - Stick it to your landlord !!
I think the "shortage" is at the "affordable" end, not much if any of this is being built. Richville, or central auckland isnt under pressure.

Another clear sign of RE agents manipulating asking price by influencing demand.
In DEC/JAN property stock on the market was mostly in the "had to sell" bracket, and agents advised vendors to not put on the market if you don't need to sell. Wait till after Chinese new year if you want to max your capital gain.