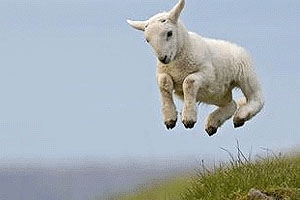 Throughout the country Harcourts sold 2056 residential properties in August which was 70 more than the 1986 it sold in July, but down 24 from the 2080 it sold in August last year.

However there was a definite hint of a spring surge in the air, with the agency signing up 2601 new listings in August, well up on the 2009 it signed up in July and the 2391 it signed up in August last year.

"The traditional spring wakeup was already apparent in August, with the central region, Wellington and Christchurch all showing a jump in the number of new listings," Harcourts CEO Chris Kennedy said.

"Sales consultants are already reporting a lift in the number of appraisals being sought."

However the market remained tight.

"Record prices are symptomatic of the underlying problem affecting the property market, population growth is not being adequately catered for with new builds," Kennedy said.

.. can't blame them for " singing " ... all those new listings , all those potential rivers of gold fees heading into Harcourt's coffers ... yeah , I'd be belting out a number or two ...

And not wishing to be a party pooper , but if there's anyone ... or just one ... person out there who's a little leery of $Million houses in Auckland , head across to New Shrub , and listen to this mornings 5 minute interview of UK economist Ann Pettifor , by Paul Henry ...

CEO says 'traditional spring wakeup was already apparent in August' ...... of course he would say that ...has he perused the number of Auckland properties, up for auction, that were passed in ...... why this information is even available on this good website :) .....the crap continues ......

So if it's not the local investors, kiwi's citizens or immigrants buying in Auckland as they can't afford too - then who is? Auckland house prices still heading up??

That only leaves mortgage fraud, organised crime laundering money and groups financing terrorism. With mortgage fraud the prices can keep going up until they are unable to service the mortgages.

Yes, those that are left can be considered those JK are looking after.
Most people are judged by the friends they have............

Hahahaha ... you guys are unbelievably naive and so simple minded ... is that all your brain can resolve ?? .... You are perfectly correct : "Most people are judged by the friends they have" that includes you guys too !!.... but wait ,, GDP Growth at 3.6% just announced !!! there must be a Crash coming !!

Wake up Boys ... Spring is Here !! ... The buyers are the wise people who still want a roof over their heads or expand their business and who refuse to listen to the envious losers, stupid doomsday callers, and empty brain conspiracy theory commentators ... lol

Oh look it's National Bird! And you are the simple minded one and very obviously an Estate Agent! You don't even realise that a lot of the GDP growth is attributed to a false economy brought about by an out of control property market causing a sky high dollar that also damaging our economy!

The only thing that you are making happen, is selling off this land bit by bit to overseas investors!

Here's an article for you National Bird: Bryan Gould: Spare us praise for those who get rich on housing speculation
http://www.nzherald.co.nz/opinion/news/article.cfm?c_id=466&objectid=11…

quote from article: Who could doubt that speculative activities of this kind now constitute the major risk faced by our economy, to say nothing of the housing crisis that has now placed a family home beyond the reach of many families and reduced others to sleeping in cars, tents and garages?

Should we not say that if the time has now come when excessive speculation fuelled by foreign investors must be restrained, the same is true of speculative investment from domestic sources as well?

From CNBC, today, Chris Watling, CEO of Longview Economics talks about the house prices in Shenzhen:

The average Shenzhen house prices is $800,000 which is more than London and more than the U.S. Of course London prices is valued in dollars there and it suffered due to a weaker pound. The average income in Shenzhen is $8000In London average house price to median income is running at 15 times. In Shenzhen the average ratio is 67.
.

They do this amazing thing in the provinces - when the price of houses goes up they build more houses. Auckland just restricts more land supply and watches as construction flows to the provinces.