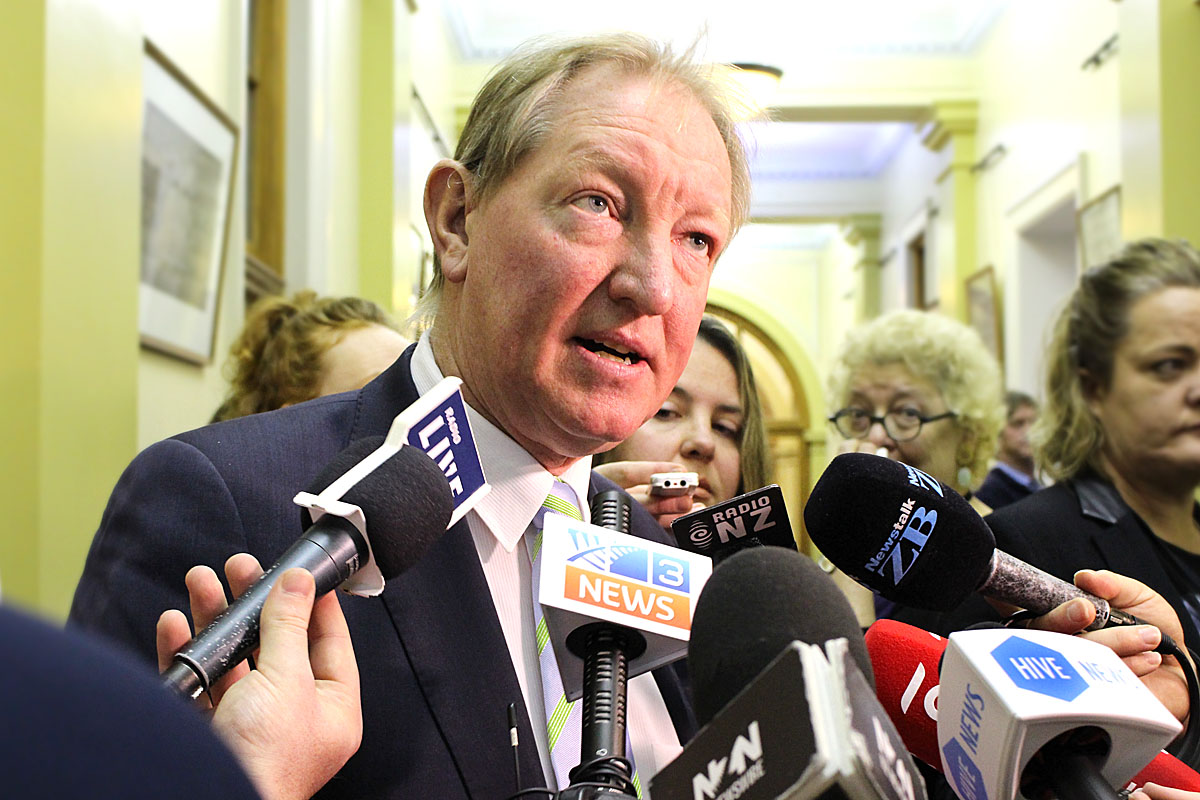 Building and Housing Minister Nick Smith talking to reporters on NZTA land at Manukau on May 29. Photo by Lynn Grieveson for Hive News

Building and Housing Minister Nick Smith has flagged that the Government is considering taking legal action to counter any delays forced on Auckland's Unitary Plan by the more-than-100 appeals lodged against the plan in the Environment and High Courts by residents groups, developers and corporates.

The Auckland Council yesterday announced that over 100 appeals were lodged by the close of business on Friday and that some could affect the way the Plan operates. It was supposed to go live from the weekend and hopes for a surge in housing supply over the next 30 years rest on the plan being operable, given changes in the rules for building "out" and "up" are forecast to allow the building of up to 422,000 houses over the next 30 years under the Plan.

Many of the appeals were from heavy hitters with significant legal budgets and years of experience in challenging planning legislation through the Environment and High Courts, including from Federated Farmers, Forest and Bird, Auckland 2040 and the Independent Maori Statutory Board.

Smith told reporters in Parliament he was yet to receive a report from his officials or from the Auckland Council on the extent of any delays, but that the Government was prepared to 'become a party' to any of the appeals to contest them, or to apply for court orders to implement the plan.

"The more worrying appeals are those that are city wide and act as a constraint on the new Unitary Plan coming into effect," Smith said.

"The detail of that depends on the nature of those appeals, and that's why I'm awaiting that report I'm expecting by the end of the week, which will give me a better appreciation of the way in which those appeals impact on the new Unitary Plan becoming operative," he said.

"Sometimes there can be appeals where there is a limited application of the new Unitary Plan, and again it's a matter of detail and sometimes it is possible to apply for court orders to make plain the implementation of parts of the plan. They're all options that I'll consider when I get that report. The Government does have the option to apply to become a party to the proceedings and that's one of the options that we're exploring. Our objective around the UP is bringing on as much new housing supply as quickly as possible and if as a consequence of being a party to that, we'll consider that."

Smith denied the appeals could downgrade the likely increase in housing supply in Auckland that the Government is relying on to combat the region's housing affordability issues.

He said most of the new houses coming on-stream over the next 18 months were from Special Housing Areas that effectively brought forward the Unitary Plan's provisions on those sites.

"By the time you go from the design, the resource consenting and the building consenting and infrastructure construction, my expectation over the next year to year and a half is that most of the new homes coming on stream are going to come from the mechanisms put in place for SHAs," he said.

Viaduct Harbour Holdings and Kiwi Property are appealing on the Transport Policies topic.

A range of residents associations are appealing against the Plan's rulings on pre-1944 overlays and against its general rezoning applications.

The Auckland Council's website shows 9 appeals against the Plan in the High Court, including from the Independent Statutory Maori Board against the Plan's ruling on Mana Whenua sites, the South Epsom Planning Group on the North West and South Rural Urban Boundaries and from Federated Farmers on outstanding natural landscapes. Forest and Bird, which has successfully held up the Ruataniwha irrigation project in the courts, has also lodged an appeal about how 'significant ecological areas' were determined in the plan.

There were 7 further appeals for a judicial review, including from Bunnings, the Character Coalition in tandem with Auckland 2040, and from Waste Management.

'Some appeals may have broader impact'

“The majority of appeals lodged are confined to specific details of the plan which are unlikely to impact on its overall implementation. However, there are a smaller number of appeals that may have a broader impact," he said.

“Consents will need to be assessed and approved against two sets of rules and decisions will need to be made on a case by case basis on what weight can be given to the Proposed Auckland Unitary Plan. It will be a top priority for the council to resolve these appeals and reduce the complexity it has on the consenting process."

Character Coalition Convenor Sally Hughes said the Coalition's appeal focused on "late changes made without public consultation that could put older character homes at risk for no demonstrable benefit.​"

"The process trampled on people's rights with a last minute decision to change the zoning in many streets, effectively denying people the chance to have any say in the matter," Hughes said, adding the group's appeal involved less than 1% of the housing stock and would not affect housing affordability.

"People living along and beyond main transport routes in suburbs like Onehunga, Westmere, Glendowie, Grey Lynn, Henderson, Grafton and Blockhouse Bay woke up one morning to find their rights had been completely trampled on, it was undemocratic and unrealistic," she said.

"Some streets that contain important character homes suddenly went from single house only, to zones allowing 3 storey apartment blocks. In some of the affected streets, like Francis Street in Grey Lynn, houses date back to the early 1900's. ​Others in Westmere contain noted 1920s bungalows. ​In Grey Street, Onehunga there are important turn of the century villas that add greatly to the suburb's character. Sticking multi-storey apartment blocks next to them doesn't make sense and will not solve Auckland's housing issues."

At some point the government has to take some responsibility and stop playing into the hands of the speculators. I suggest they invoke the public works act or they will arguing for years.
We won't see anything meaningful this side of the next election and if they carry on down the path that they are on, the following election also.

It's just hell trying to get something done in NZ. Yes Nick Smith do whatever it takes to expedite the Unitary Plan for the good of the majority

Yes there will be many people who are landowners who will see some advantage to themselves in the uplift in their land valuations.

"woke up one morning to find their rights had been completely trampled on" - you mean this morning when they found out their right to build on their own land was being trampled on by people who think everyone must have a detached one story house?

Yet another disaster for Nick. He has today effectively been sacked from his handling of the Kermadec fiasco.
Good on yer, Nick.
Gives him more time to try to screw up Auckland.

Kermadec is all about playing catchup to some international obligations we have signed up to re marine reserves - which are really intended for our local coast. So rather than upset the locals the Nats have chosen this out of the way rock. It's a con to avoid what we should be doing... and they don't care about Maori, as they will be the convenient scapegoat.

They should write the plan in Chinese , in 30 years thats who it will be affecting....

By amalgamating the old councils we have effectively made Auckland a separate city state, a bit like a rather pathetic imitation of Singapore, so we seem to need an authoritarian ruler too. Seriously, the gap between the madness of Auckland and the sanity of the rest of the country is getting bigger and bigger. I'm glad our wise and talented government isn't based there. Oh, wait a minute, our dear leader does live there.

Seems a side show really. Whatever happens with the Unitary Plan, enough supply will never be delivered to meet demand from low interest rates, easy credit, and immigration. Kind of hilarious that they bother with this fig leave. Roll on doubling of Auckland house prices in another 7 years, yay!

Yeah, that is how a property boom works. There is never enough supply to cope with demand, this is completely normal. The Unitary Plan and the ineptitude of Auckland is critical in the long term, when the property boom ends.

In other places they build 30 - 40% faster (Waikato/BoP), 60% faster (NSW), 100% faster (Qld & Vic), all much faster than Auckland. And all these places are having booms and supply is not keeping up with demand.

When this boom ends the place that has built the least will be the shittiest place to live, immigration will be highly outward.

There is also an urgent need to streamline the planning process which is horribly slow and expensive. The process will sabotage any good plan

Is one of the appellants the Chinese government or a Chinese govt owned organisation?