Barfoot & Thompson sales drop 27% compared with a year ago; LVR measures hit hard at properties available for under $500,000

Property
Barfoot & Thompson sales drop 27% compared with a year ago; LVR measures hit hard at properties available for under $500,000 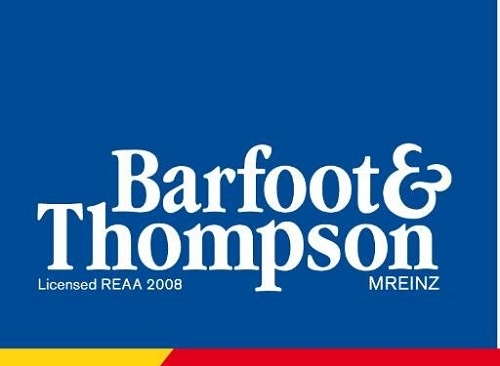 Auckland's biggest real estate firm Barfoot & Thompson is reporting a massive slump in sales during the past month in further evidence that the latest round of Reserve Bank LVR measures is starting to bite hard.

Sales by the company that normally accounts for around 40% of the house transactions in the Auckland region slumped by 27% compared with the same month last year.

The 778 properties sold was the lowest achieved by Barfoots in an October for five years.

The big drop in sales saw a large rise in the number of properties available for sale, with Barfoots having the biggest number available at the end of a month for some three years.

“At month end we had 3,711 properties listed, 21.3 percent higher than at the end of September,” managing director Peter Thompson said.

“The last time sales numbers fell this low in an October was in 2011, when the market was still not fully recovered from the 2007 Global Financial Crisis.

“It is yet another sign the Auckland market is losing its forward momentum."

Thompson said the new 40% deposit limit that investors must meet had a significant impact on sales in the under $500,000 price category.

Thompson said that with the normal spring lift in sales activity "failing to arrive this year," the relationship between buyers and sellers "has moved into a more balanced position".

Higher priced houses were still selling well and the shift in balance of the houses sold - toward the more expensive ones saw both the median and average sales prices increase.

"New listings picked up in October after a more subdued than normal September. Seasonally-adjusted new listings rose 5.4% month-on-month and 4.7% year-on-year.

"Total available listings took a step higher given the bounce in new listings and fall in sales. Listings are now back around levels not seen since May 2014. In saying this, inventory levels remain well below historical averages, and low inventory will continue to support prices.

"Average prices rose again in October, to be 12.3% higher than a year ago. But, as the Barfoot & Thompson house price measures can be skewed by compositional changes, we do not place much weight these on price movements.

"These results are in line with what we would expect given the latest round of LVR restrictions. Past LVRs have caused a temporary slow-down in house sales, which is what we are seeing again in these data.

"However, it remains to be seen how long this round of LVRs will weigh on Auckland housing market activity. In the meantime, low inventory, high population growth and low interest rates will continue to support house prices," Mundy said. 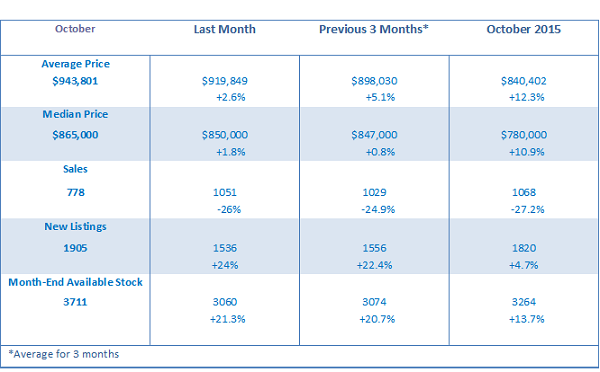 Here comes the correction everyone said would never come. Investors taking their capital gains before there arent any.

The adjustment of prices upwards to match the low interest rates may be complete. What now remains to be seen is will owners of 3-4 years plus take the gain and sell? If they do, will this cause a price drop or will others step in? Will it spook more recent purchasers to sell, fearing a loss in equity? I watch with interest to see if the behavour matches those who come to the sharemarket at the end of a run.

Interesting contrast with the QV figures, which are significantly lagged. QV is based on settlement, and when the data is loaded so follows by one to two months. The continuing sales in the top sale prices could disguise a decline in median prices.

My understanding is that QV is a measure of property valuations (Someone correct me if I'm wrong). Basically QV is a measure of what of valuers put a value on a property. It could be completely different from actual sales data hence why it is not a great measure.

My understanding is that QV recalculate/recalibrate the 'roll' or capital value of all properties in the location on the basis of recent sale information. They then report in the change in the average price for that location. This has the advantage that it is aligned with the distribution of properties in that location. In contrast, the real estate agents figures are based on the average value of recent sales. As a result if there is a lot of apartment sales (for instance) the real estate agent's average prices will come down. Conversely the QV figure uses the sale prices to update the overall value of properties. It is therefore possibly more accurate, but seriously lagged and less likely to reflect the recent increase in supply. I think what we are seeing is a reduction in Auckland house prices but which will not be reflected in the QV figures for two months.

That's pretty much right, except QV's data is not based on settlement date, it is also agreement date. The difference is that it uses a rolling three months of sales to calculate the roll (as you rightly pointed out).

This combined with a 10% drop in the NZ share market and banks profits dropping due to asset impairments does not bode well.

As the real estate agency revenues start to drop, they will be pressuring their vendors to come down in asking price. If you are still in the game, better sell up at a reasonable price and exit if you have the chance. I have noticed people are all trying to sell at the same time, the number of listings in some suburbs have doubled!

Add another 1.5%so far today now into correction territory.

Sky City tells the story. Funded by laundered cash....... but all over rover.

sweet, can buy 10% more with my money this month

The quick flick specialist will have to hold for two years to allow access to the "I didn't mean to make a speculative gain" tax evasion clause, the investor/speculators are shooting up their remaining equity in the regions expecting that the same Auckland boom pattern to occur (good luck), Chinese are getting warned off by several factors the foremost being falling foul of the government who likes to shoot or organ harvest people it doesn't like, and FHB will not want great risk of a capital loss on purchase, and also really want the lowest stupid sized mortgage as possible.

How many of the debt ponzi will be left with no chair to sit on (no next sucker to sell off to) as the music winds down to a stop. Next 12 months will be really interesting.

Is it an OBR event that you want to bring on??

Good news. The top end will probably still do well due to wealthy people moving here and also there will be those who have had the Untiary Plan subdivision bonus.

May be not by next Tuesday Trumpy might be the man. By then cash and gold are the things to have

Am I missing something? Median and Mean prices both went up in October and everyone is saying it's the beginning of the end. Show me 3 months of solid declines in Auckland and then I'll listen.

LVR restrictions are hitting investors the most. Investors buy mostly low priced properties so since there are less lower priced houses selling the average price is going up

I am firmly in the bear camp for Auckland property over the medium term - but I agree with your point.

I would say right now that many of the signals for a market correction are lining up; mortgage approvals tanking, sales volumes tanking, time to sell increasing, unsold stock increasing, tightening credit conditions, interest rates appear to have bottomed, Government reducing immigration, building approvals trending upwards......but, we've seen similar conditions over the past few years only to see the market take another leg up.

With the current listings boost / low mortgage approvals I think it's safe to safe November and December will be fairly quiet but January through until winter 2017 will be the real test.

I do not have a mortgage broker.

Why do you need one?.

Because I like her :) Whars wrong with having a broker?

Sept North Shore house listings on Trademe early 700's current (3rd Nov) listings for NS on TM are at 1107 and climbing. Market has turned ? On the other hand I feel sorry for the European car sales yards going to be doing it tough with fewer cashed up agents..

Apt time to introduce DTI so that the house price remains stable and does not shoot up again after few months. Comprehensive policy is need of the hour and RBNZ is aware of the same but does it suits National Government Interest.

Mid level inner city antique villas will hold their value in auckland, new builds and sh¥t box apartments will go down in value, none of my properties are younger than 1945 for the reason of being irreplaceable

Yes totally agree! This old home in sought after DGZ just sold 3 times in 40 days for huge profit. Not really a surprise is it?
http://www.nzherald.co.nz/business/news/article.cfm?c_id=3&objectid=117…

I see the real estate agent's advert is still online. Even has the video DGZ - I know you like them.

I am surprised the owners accepted 1.35M as it looks worth more than that as 412sqm freehold section. Close to motorway though which may have made them think it was less valuable.

I have watched it a few times even before it was sold Zac but thanks for thinking of me :-) I appreciate that.

This property is right by the Gillies Ave motorway entrance and is extremely noisy with the constant traffic noise. Also a very busy stretch of Gillies Ave to drive in and out of the single garage.

Villas are not special. Replica villas can be built if so desire.