Fewer turning up at apartment auctions but bidding still strong for some properties, while others got no bids

Fewer turning up at apartment auctions but bidding still strong for some properties, while others got no bids 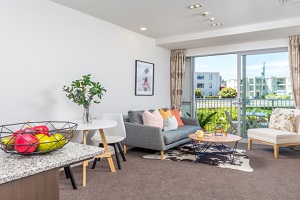 The interior of the apartment in the Shoalhaven complex at Takapuna that sold for $556,600.

The Auckland apartment market remains fickle, with widely different results at the two major apartment auctions in the city this week.

At Barfoot & Thompson's regular Thursday morning apartment auction a smaller than usual crowd turned out for the six apartments on offer, perhaps suggesting that some buyers have already gone into holiday mode.

The apartments were mostly larger ones that may have appealed more to owner-occupiers than investors, but only one of the six was sold under the hammer and the remaining five were passed in for sale by negotiation.

Three of the apartments that were passed in did not receive any bids.

There was particularly strong bidding for a two bedroom apartment at Takapuna, getting down to $100 increments in a duel between two keen buyers, before it was eventually sold for $556,600.

The apartment that was passed in at the same auction was a leasehold unit with two bedrooms and a car park in the Scene Two complex on Beach Road in the CBD, which attracted a single bid of $190,000.

Auctioneer Ted Ingram then topped that with a vendor bid of $250,000 and when there were no further bids it was passed in.

The full results of both auctions, with details of all properties offered including those that didn't sell and the prices of those that did, are available on our Auctions/Sales Results page.