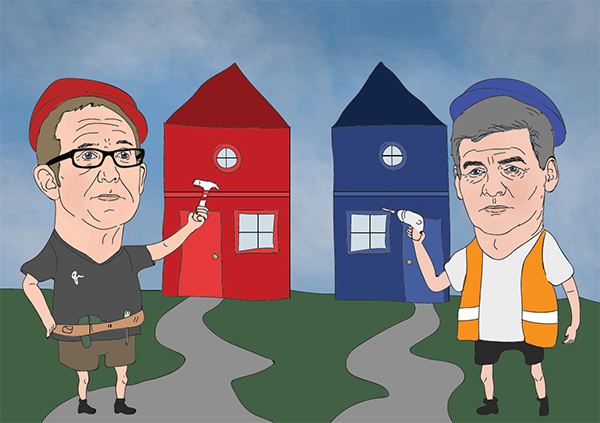 Labour and National are both talking up the potential for building more houses on Crown land in Hamilton.

The parties put out press releases detailing plans for extra social housing in Hamilton (and KiwiBuild housing too in Labour’s case) within three minutes of each other on Friday.

Labour leader Andrew Little was first out of the blocks, promising 200 of Labour’s KiwiBuild houses and state houses on land in various parts of the city.

Prices for the KiwiBuild homes – to be sold to first home buyers in the private market – will range from $200,00 for one-bedroom units, to $350,000 for three-bed terraced housing, Little said.

The National-led government's Minister for Social Housing, Amy Adams, then announced 43 new two-bed social housing properties will be built in Hamilton by the end of July in a $12m project.

Labour will build 200 affordable KiwiBuild houses and state houses on unused government-owned land as the first steps in our plan to fix Hamilton’s housing crisis, says Leader of the Opposition Andrew Little.

“We will build new houses to replace the abandoned state houses at Jebson Place and on the site of other run-down state houses, as well as new developments. It’s a disgrace that National has left this site rot for years on end in the middle of a housing crisis.

“These will be the first of thousands of good, modern, affordable homes Labour will build in Hamilton. Prices for KiwiBuild homes will vary from $200,000 for one bedroom units to $350,000 for three-bedroom terraced homes.

“There were 219 people on the Housing New Zealand waiting list for homes in Hamilton, as of March this year, but all National is promising is just 43 state houses at a time of desperate need. Labour’s plan will fill the need for more state houses and provide more affordable homes for first home buyers.

“Hamilton needs more houses, simple as that. House prices and rents are rising beyond the reach of families. Young couples are seeing the Kiwi dream of owning their own place slipping away. Overcrowding and homelessness are on the rise.

“When we’ve got a housing crisis, the Government needs to step up and build some houses. National won’t do it. Labour will.

“Labour will work with Hamilton Council and Waikato Tainui, who have the right of first refusal on these blocks of land. I know the Council and Tainui are both committed to more affordable housing; it’s time the Government played its part, too.

“It’s time for action. Rolling up our sleeves and fixing the housing crisis will be the top priority of the next Labour-led Government.

“We’ll do that by building affordable homes for first homebuyers, cracking down on speculators who use our houses as gambling chips, and building state houses for families in need,” says Andrew Little.

Forty-three new two-bedroom houses will be built in Hamilton by the end of July, Social Housing Minister Amy Adams has announced.

“Around 70 per cent of the people on the social housing register for Hamilton need a one- or two-bedroom home. However, these homes make up only 50 per cent of Housing New Zealand’s Hamilton portfolio.

“We need to increase the number of smaller social housing properties in Hamilton. Housing New Zealand’s infill programme is allowing these homes to be built quickly.”

The $12 million programme allows Housing New Zealand to make better use of its land holdings in a cost-effective way.

“It makes sense to build the new two-bedroom homes on underutilised sections where this is practical. There’s no need to subdivide the sections, which means the new homes are very cost-effective and provide the taxpayer with great value-for-money.”

Housing New Zealand is working closely with the tenants of our existing homes at these sites to make sure there is minimal disruption while the new homes are being built. They are also taking the opportunity to fabricate a lot of components off-site, to speed up construction and reduce the impact on the neighbourhood.

“The new homes are warm, dry and modern. They include covered deck areas for outdoor living, and are designed to be easy to look after and maintain,” Ms Adams says.

The first homes will be completed by late May, and the entire programme will be finished by July.

Ms Adams noted the constructive relationship between Hamilton City Council and Housing New Zealand, which meant the project was able to be streamlined and the full consenting process fast-tracked.

“It’s great to see the Hamilton City Council working constructively with central government to help provide essential social housing projects for the city. Councils have a big role to play in solving demand for social housing in their communities, particularly through streamlining consenting processes to help us get houses built. We can build houses more quickly when councils cooperate. Hamilton City Council have done their ratepayers proud by being part of the solution, rather than the problem.”

When will site works commence?

Housing New Zealand has already started work at a number of sites around Hamilton. The first homes are nearing completion, and will be finished by late May.

Where are the new homes?

Who will live in the new homes?

Once the new homes have been completed, they will be matched to people on the social housing register, or used to rehouse Housing New Zealand tenants living in homes that aren’t suitable for their needs.

All the new homes have two bedrooms, which means they’re most suitable for small families.

Oh National ..you have sat on your hands and denied, denied denied - waiting for the magical 'free' market to work. There was much you could have done, but didn't. You sudden burst of enthusiasm is an insult to the voter. Good riddance in November. Anyone but you, I don't care who.

Totally agree. Most people feel unrestrained immigration is a free market policy since the National Party is ready to live and die in favour of it.
Record immigration is a product of population policy paralysis and short-term fixes to structural problems like education. Free market immigration would entail skilled migrants raising labour market competition not depressing wages unequivocally. That's just bad politics not capitalism.

Yet again the 'too little too late' party, is trying obfuscation.
They CAUSED this mess via numerous disastrous choices (for the average Kiwi), e.g. encouraging overseas owners to buy NZ property, having no taxes in place to discourage overseas owners, removing state housing when they were most needed (one way or another) and not tackling multiple property ownership (e.g. remove tax breaks, using CGT, excessive leveraging via banks, non cash deposits etc).
Change the Government, it is the ONLY language these crooks understand. And NEVER EVER vote for the corporate fascist party again.

Nz doesn't know how to do terraced housing properly. Examples I have seen have the potentially to turn into ghettos.

43 two bedroom houses, when there are 70,000 people coming into the country each year because they turned on the immigration taps to suppress wages. What a joke.

Where was national all this year's.

Now they want vote so coming up with cover up policies to bribe voter - Just imagine if people fall for it and do vote them will than show their true color.

9 year was good enough time to atleast accept that their is a problem. Accepting a probllem is first step in solving the problem.

We actually don't want the government meddling too much in things. Election time is the time to present proposals and NZ is hardly in a crisis situation. Things are actually pretty good and the so called "problems" that NZ has are common to all the Anglo countries so it is unlikely to be National's fault. Just a bit of tweaking required.

John Key was very confident National knew the answers to the housing crisis in 2007, before National was in power. https://www.youtube.com/watch?v=cWPgoAI1cLE

Well...sure...not a crisis for anyone born at the right time to benefit from housing affordability achieved by previous generations, then see this turned into a nice nest-egg.

I would vote for another party, if they were a better party, but to vote for a worse option just because you want change is not going to happen. National came in and handled the GFC, we could be in a far worse condition than we are in now and there plenty of countries in the world that are currently in melt down mode. If you think things are bad here you need to switch on the news from Aljazeera and see what a mess really looks like. New Zealand is paradise by comparison.

Carlos 1st ; watching Qatar owned Aljazeera rates up there with RT owned and controlled by The Kremlin for delivery of propaganda along with Kremlin financed Wikileaks !
2nd ; National actually did not save NZ at all from the GFC !
NZ can thank a past Australian finance minister who disallowed the merging of Australia's largest banks which meant none of them were large enough to play in the Wallst derivatives playground much
Canada also survived GFC due to a similar ban on large bank amalgamation keeping Canadian banks banking instead of wild derivatives speculation
Heck even US bank Wells Fargo ( now polluted by Goldmans) pre GFC was a clean straight bank which required no bailout but took their allotted $100bill
If you really think voting the same National govt in again after 9 years providing 0 strategy then you deserve
what they will deliver,more disfunction

Carlos67's point still stands though.
If you can't trust Aljazeera or RT who does that leave?....no one!
Also, was Wikileaks info just propaganda? Of course propaganda can still be the truth you know.

So why would Qatar & Russia both non English speaking wish to set up at enormous expense TV Networks to broadcast to western countries ?
I suggest you READ HISTORY
As for Wikileaks please NOTE they never release any KREMLIN documents !
They are a tool of The Kremlin
Please do some investigation kiwi

So you think the West should have a monopoly on BS?
Wikileaks documents are still true. I'm only interested in the truth.

This article is about NZ housing. Can we please stay on topic in the comment thread. If you wish to argue about international politics, WikiLeaks etc, please do so in the 90@9 and/or what happened today comment threads. Thank you.

Things were looking pretty sweet in Ireland as well during the Celtic Tiger.....

Ever heard of slow and steady wins the race Carlos? I don't know why people think we're in such a wonderful position? To me, our 'Rockstar' is putting us in a position of significant risk or reversal.

Ah, but, wait a minute, that can't be right. National are going to actually build 43 houses by July? Crikey. Actual real buildings, not make believe? Surely not? I am shocked, shocked, I tell you.
https://www.youtube.com/watch?v=SjbPi00k_ME