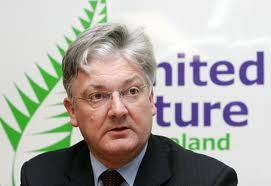 UnitedFuture leader Peter Dunne has announced a new rent-to-buy policy ahead of the 23 September general election.

Dunne has attached the policy to the government's recent Auckland housing announcement. He said of the 20,600 'affordable' homes to be built under the Auckland Housing Plan, half would be offered as rental properties, with a portion of tenants' rent counting towards purchasing a share of ownership in a given house.

When that ownership share reaches enough of the property to count as a deposit, the tenant would be offered title over the property. They would need to find appropriate financing, such as a bank mortgage, for the balance of the purchase price.

"There is not that much difference in principle between this policy and the Government’s plan to build affordable houses to sell," Dunne said. "What we are changing is the way they are sold and who they are sold to; we want to see specific targeting of people who are struggling to save for a deposit and pay their rent at the same time."

The Internal Affairs Minister in the current coalition government, Dunne is a former Labour Party MP who is in Parliament by way of the politically organised safety of Wellington's Ohariu constituency seat. It is widely assumed that if National wanted to take the seat, then it could do so, particularly after recent boundary changes.

UnitedFuture has provided support to both the current National-led government and Helen Clark's Labour-led governments during the 2000s. However, Dunne has in recent years tended to lean further away from Labour, attacking his former party on multiple policy fronts.

That said, this announcement from UnitedFuture today could be read as a tack back towards Labour-like ground as the election approaches, or at least as an example of Dunne's social democratic roots.

You can view interest.co.nz's comprehensive list of announced party policies in our Election 2017 section here.

See the announcement from UnitedFuture below:

UnitedFuture has announced a new rent-to-own policy for housing to deliver housing to a generation of New Zealander’s currently locked out of the housing market says UnitedFuture leader, Hon Peter Dunne.

“UnitedFuture is advocating for opening an additional avenue for home ownership that targets those who are currently locked out of a market that is seeing too few young families able to achieve the security of home ownership.

“Our plan is simple. We would allocate half of the affordable houses being constructed under the Government’s building programme in Auckland to be included in a new rent-to-own scheme that would provide a new opportunity to people who have difficulty in meeting the financial requirements around buying a house.

“We would offer these houses as rental properties that people could lease, provided they lived in that property and pay market rent,” said Mr Dunne.

Mr Dunne said that this policy was aimed at people who were currently shut out of the market by prohibitive deposit requirements.

“A generation of New Zealanders are facing the prospect of home rental for the rest of their live and this policy would put them on a pathway towards home ownership.

“The rent people pay would be accumulated as savings earmarked for a home deposit. There is not that much difference in principle between this policy and the Government’s plan to build affordable houses to sell. What we are changing is the way they are sold and who they are sold to; we want to see specific targeting of people who are struggling to save for a deposit and pay their rent at the same time.

“This is a first step in opening up new avenues for housing affordability. I would hope that it could be expanded into other centres where Central and Local Governments have accommodation building programmes and indeed be used as a template for private housing developers, who would benefit from the ongoing and secure stream of revenue this policy would provide,” Mr Dunne said.

Just route the extra dollar or 40,001 dollars through a trust and have a nill personal income or whatever level of personal income the government of the day has decided to give the most handouts to. Paying 33% trustee tax on your income is worth it if they are handing out 20% of $600,000 houses under the guise of rent to own / live rent free while "saving" a deposit for a house with a price fixed so that it doesn't climb with inflation.

Why moan about the handouts when you could just receive them instead. It is middle class New Zealanders whom this guy is trying to make foot the bill to provide those with accountants with even cheaper houses!

maybe he needs to rent to own a political party. Have they got 500 members this time.?

he will become a memory as soon as his one vote is not needed,

If that electorate has any judgement at all, Greg O'Connor will paste him.

Peter Dunne is pro high immigration. Called a capital gains tax an "envy tax". Complained that proposed legislation was going to be too hard on Real Estate agents. get the picture?

Isn't this more about giving the appearance of trying to fix a problem, but not actually solving the root cause of it. Rent to own means someone in the middle will be making a good amount of money from it. But the middle men are the root cause of the problem in the first place. We pay far too much in materials to build in NZ, so they really should be looking at all the ways to bringing down the cost of building, not getting people into more debt, by trying to sustain the high prices, and fueling the bubble even more.

"We would offer these houses as rental properties that people could lease, provided they lived in that property and pay market rent"
Nice idea.
Market rent today barely covers the landlord's (the government in this case) expenses. So how can market rent also go towards building a deposit ? Surely you'd have to pay more than market rent to accumulate a deposit. This is also fair compared to someone who pays market rent elsewhere and never ends up owning the house

He's been sitting in his comfy seat for 9 years and this is the first time he's looked at addressing a shortage in housing.
ACT, UNITED FUTURE, MAORI/MANA/, CONSERVATIVES, TOP should all be canned if they can't get 5% of the electoral vote - waste of bloody time and money.
They are paid at least twice the mean salary and claim expenses left, right and center including fancy bow ties.

"Mr Dunne said that this policy was aimed at people who were currently shut out of the market by prohibitive deposit requirements."
So we are talking most of the Auckland population. So who are going to be the lucky ones in this lottery?
Who exactly is being targeted here? If the deposit is prohibitive, you can therefore assume the price itself is prohibitive, which means to help these people, you need to provide a subsidy in one form or another.
Firstly, as Rob points out, this is just meddling to sustain the current high prices. Secondly, it is a subsidy from taxpayers, but not to the most needy who can't afford a place to rent, but to a select few somewhere in the middle (who knows?).

So how on earth is this going to work in practical terms ?

If there is one thing that politicians know, it is that 95% of voters don't think about practicalities.

I seriously still don't know why a party like United Future exists. Even more perplexing is why an electorate would vote Peter Dunne into parliament.

Who pays or or how is the payment of shortfall dealt with ?.

Its ludicrous to think this will ever work without a massive injection of Government money and support , and its just unworkable .

Taxpayers to subsidise it, just like we currently are for other property investors.

Ridiculous "Policy" with not details that will not actually work. it's just free money from the government to the middle class.

I actually don't care if you want to do that, but just do it evenly and fairly ie to ALL of the middle class not just those who live in Auckland and haven't managed to buy a house yet.

Our politicians really are a sorry lot. I'm not sure there's any that actually have a clue how the property market works on the most basic level.

Generally a great idea, but how is this going to work with the housing supplement? Long before you accumulate anything like the capital for a house deposit, you loose the government hand outs. Will this not count as capital, and people in this favoured situation will have a very unfair advantage compared to those not renting to own a state house, and they will remain stuck in the present iniquitous poverty trap.
I suggest somebody looks a capitalising these state benefits as a house deposit.

Totally agree.
In August 2013 John Key announced “International experience shows it’s risky to lend 100 per cent of the value of a first home...” when changing minimum deposits under welcome home scheme govt guarantee from as little as zero deposit to 10%.
Conveniently forgetting that many home owners or their parents got started by capitalising family benefit or other schemes.
And of course many of those who get a home these days using a guarantee or gift from mum or dad to get into their first home (includes many of national's constituents) are doing just that.
But that's different of course.

Every Dunne-like solution to the housing problem only contributes to more Demand however artificial.
Just cut the available finance and while it will be painful for some, it will ultimately lower the prices.
Remember that while the costs of building is dependent on labour and material, land value is very flexible.