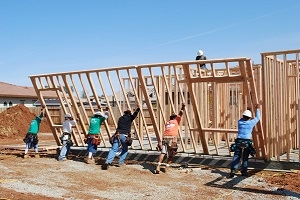 The number of building consents issued for new homes ticked up in May, but is still well short of what is required in Auckland, where new building starts still lag well behind migration-fuelled population growth.

The latest figures from Statistics NZ show 2794 new dwellings were consented throughout the country in May, up from 2106 in April and up 10.9% compared to May last year.

In Auckland where the housing shortage is greatest, 885 new dwellings were consented in May, compared to 726 in April and 732 in May last year

However that is still less than three quarters of the estimated 1230 new homes that need to be built in Auckland each month just to keep pace with the regions's high, migration-fuelled population growth.

That suggests Auckland's housing shortage, already estimated at more than 30,000 homes, is continuing to increase by several hundred homes a month.

Within the Auckland region the biggest area of new building activity remains Albany where 208 new homes were consented in May, followed by 159 in Rodney,

But only 65 homes were consented in Manurewa -Papakura and 88 in Franklin, where property prices tend to be cheaper.

In the Bay of Plenty 220 new homes were consented compared to 177 in April and 242 in May last year.

One of the biggest increases in new consents was in the Wellington region, where 227 new homes were consented in May, compared to 128 in April and 138 in May last year.

In a First Impressions note on the figures, Westpac's Acting Chief Economist Michael Gordon although the annual number of new consents issued in Auckland hit a new high for the current cycle of 10,379 in the 12 months to May, this remained "well short of what's needed to match population growth."

Eathquake related builds in Christchurch had slowed over the last couple of years and now appeared rto have settled around 'business as usual' levels, Gordon said.

Is it possible that the market has sensed the risks at the current price levels , and we may see fewer and fewer developers ( and Financiers ) prepared to take big punts on Greenfield residential developments .

There are just to many unknowns :-

* What a change in Government may bring i.r.o. taxation , new builds , and mass housing development ( as promised by Labour )

* Where interest rates are going

* Where immigration numbers will stop with the new settings

* Where the banks perceive the risks are too high to lend

These are all things that scare a market , so the view may be to let a new Government carry the risks

Said in the style of Hitler: "YOU SHALL LIVE IN AN APARTMENT BY A RAILWAY STATION. NOWHERE ELSE!!!!!"

You sir are a damned optimist.

I would treasure an Auckland Council capable of basic dictatorial idiocy, maybe in 10 or 20 years Auckland might climb up to a semblance of such sub-par bureaucratic goal seeking behaviour.

Auckland Council plans to build apartments, but makes land on which apartments might be built too expensive.

Auckland Council wants a compact city, but builds unlimited suburbs outside of the city.

Imagine the traffic in Auckland after another 20 years of government pretending to make an effort on housing affordability while importing as many people as possible, while the council continues to fumble along ineptly.

The Southern Motorway will be officially renamed The Southern Parking Lot, and that'll be the council's biggest accomplishment.

Actually its not the council, they will consent houses in a reasonable timeframe as per government requirements. And they don't own the land or control finance or costs of market. There are more than enough sections to build on. Council's fault here is minimal versus the govt. Not that we want another million people in the city anyway...best solution don't build and people live elsewhere.

I generally like to look at the bright side, so I will say that it's a good thing that building consents in Auckland have increased by 21.9% from a year ago (885 in May 17 vs 726 in May16). Yes, we're not there yet but it's a step in the right direction.

Auckland's Unitary Plan is planning for an extra 1,000,000 people over the next 40 years. (Yes - you read one million correctly.) That equates to about 20 new households (or 70 people) every day.

Auckland needs 13,000 new houses each year to respond adequately to population growth - but is consenting just 10,000 and bonding a mere 7,000.

Ask yourself what's going to happen to Auckland house prices in the medium/long term......

VOTE FOR THE PARTY THAT WILL PUT A STOP TO THIS MADNESS
[No shouting allowed. :) Ed]

Vote for the party that will put a stop to this madness. Right now that's Winston Peters

The population growth predictions used in the Unitary Plan process were a 400,000 to 1,000,000 person increase.

Auckland Council cherry picked the upper figure, but that is not a good indication it is actually going to happen.

In fact, the Unitary Plan is planning for 400,000 more households (not people) over the next 40 years.

There's no way at the current build rate that Auckland will get anywhere near providing for that level of increase. And that's the crux of the problem (and, of course, the headache for the policy analysts and the politicians - which we read about daily).

Rationing will need to take place through the market - so prices will increase markedly over time.

What's inevitable is that the boom of 2014-2016 will not be the last one that Auckland experiences. Astute investors are already anticipating the next boom.

The Auckland Council did indeed decide on a unitary plan they say will produce 400,000 homes needed for 1,000,000 people, but as you do point out they are stuffing this up quite badly. Likewise see my comment above where Auckland is being out built by the less populous neighbouring regions.

Astute investors should really not trust the planning abilities of Auckland Council.

Toothepoint your numbers suggest that sufficient homes are being consented . So prices will fall

Suggest you do a course in arithmetic before you take up property investment.

Actually, given your judgement/foibles, better you stay away from property investment altogether.

Toothepoint 20 new households (or 70 people )per day . You do the math in terms of housing.

"Annual net migration reached 72,000 in the year to May" so if half come to Auckland (and my guess is that is conservative) then you have 98 people per day not 70. Of course native Aucklanders are leaving Auckland and the majority of these immigrants are on below average wages so live multiple people to a house. Even so they displace our poor families and that is why we have people living in garages and cars and multiple families to a small house.
Put immigration to match the average OECD level and it would be about a fifth of that figure and hold it there for two years and we begin to solve the housing problem. Then they can put it back to our world record immigration level if that is what we really need.
Why it will not happen: home owners (like myself) want prices to be sky high and businesses want wages to be 3rd world low so the national party listens to them. When home ownership drops below 50% and young people start voting it will all change but that may take another 3 national led coalitions.
Vote wisely.

I was reading in the news this week that immigration is at record highs for Canada and the UK too.

NZ First - good entertainment for all the family.

Don't worry tothepoint will find some other numbers I'm sure, or part of

Does anyone know the % , owner occupied to renters now compared to just before this latest boom, say 2014, Auckland only, just interested to no

Yeah booms corrects, names, it's all ok, about every 10 years for donkeys housing has gone up then levelled of but long term up, good thing to get into if you can for lots of reasons, retirement, help family, I do like the idea of KiwiSaver, it's just a shame things like Aucklands competing with overseas money and the rest of nz competing with Aucklands then greed and keeping up with the jones , things like interests only loans and leveraging up your parents house , I'm not against a lot of things but using your house as a ATM to risky levels, but owell there problem but sorry if people can't have fair play fields or take stupid risks maybe the rules need to change, boom busting to these extremes 2008 and who no,s now isn't that great on the hole, just saying

Thanks cowpat that not that bad

Consents is a bullshit stat beloved of National government. Interest could we pleeeeease get stats on houses issued code compliance i.e. houses finished. How many get finished versus consented - 80%?