We report on how active Housing NZ Corporation has been in seeking housing consents, and how concentrated this has been in Auckland

We report on how active Housing NZ Corporation has been in seeking housing consents, and how concentrated this has been in Auckland 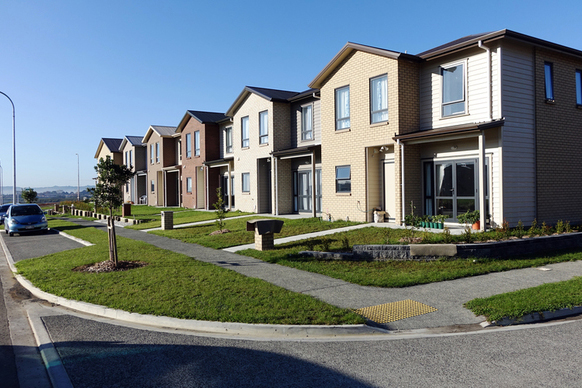 After our report on building consent activity for November 2017, which showed a noticeable rise in dwelling consent levels, some readers have wondered whether this is being driven by Housing New Zealand Corporation (HNZC) activity.

Statistics NZ has been kind enough to supply that data and it does indeed show a sharp rise in the number of consents initiated by the central government agency. But in terms of an overall proportion it is not excessively high. 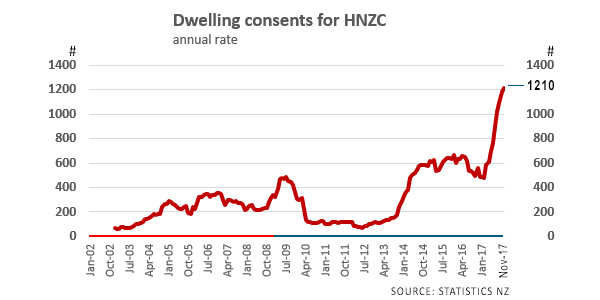 HNZC unit sizes have been getting smaller. 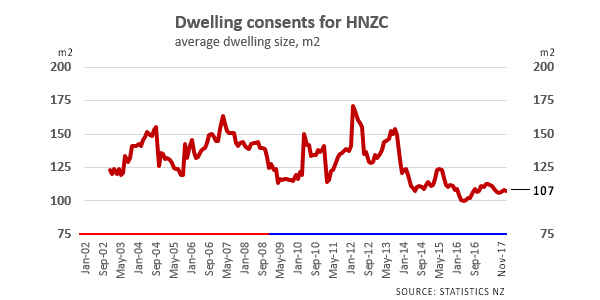 And most of the HNZC consents are for new housing in Auckland. 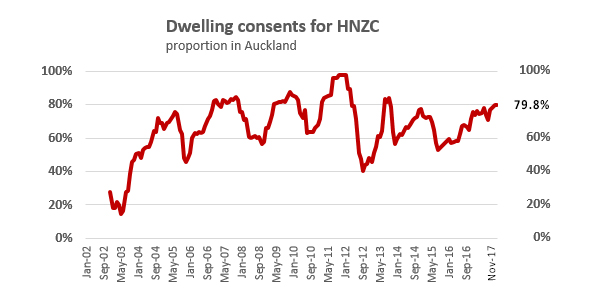 The upcoming focus on KiwiBuild could be expected to raise the influence of HNZC on dwelling consent data nationwide, and especially in Auckland.

Statistics NZ has supplied us data for all regions so readers who would like numbers for other areas can ask in the comment section below.

Thanks David.
As indicated by me, a big jump in HNZ consents in Auckland. Although I would have thought they might have been higher than 9.5% of the whole in Auckland.
Having said that, some developers are fronting big apartment developments for HNZ under their own name, so this is probably not showing up in the stats. Factoring this in it's probably upwards of 15-20% of consents

thanks David , it is very good that you have seperated the horizontal axis in the political governance colors of the period ... The difference is Clear even to the color blinded !!

I think 2005 was the year when HNZ started long term leasing en mass new build houses for its clients ...
We shall watch the new kiwi build numbers and ready to help with stock take this time next year...