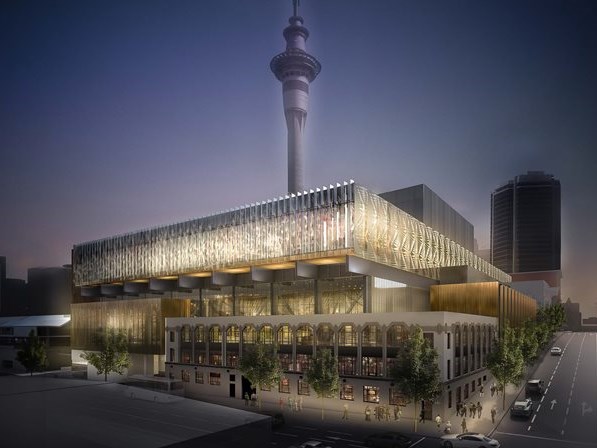 The suffering, amazingly, is not yet over for long-suffering shareholders in building giant Fletcher Building after it put its shares into a trading halt on Thursday.

Fletcher now says it is expecting to breach one or more of its covenants in its financing arrangements as a result of further losses expected.

The company, which has booked substantial losses in the past year - mostly on government-related projects - told the NZX that it had identified yet more problems in its strife-torn building and interiors division.

The company has already forecast further losses for that division in this financial year of $160 million. Now it's indicating that losses will be even more than that.

Problematic projects for the company have included the new Sky City International Convention Centre in Auckland and the new Justice and Emergency precinct in Christchurch.

Fletcher has now indicated that as part of its preparation of six month accounts for the period to December 31, 2017, it has been reviewing "key projects" in the B&I division and now expected further "material" losses in that division that would see it breach "one or more of the covenants in the Group’s financing arrangements".

It made this statement to the NZX:

Fletcher Building has today requested a trading halt of its shares and capital notes on the NZX and ASX exchanges. The trading halt has been sought because the Company is in the process of reviewing the key projects in its Building and Interiors (B+I) business as part of the preparation of the Group accounts for the six months ended 31 December 2017.

Although the project reviews are not yet complete, the current expectation of the Board is that there will be further material losses in the B+I business beyond what was provided for in October 2017. Once the extent of those further losses is determined and provided for, it is expected that this would result in a breach of one or more of the covenants in the Group’s financing arrangements.

The Company expects the trading halt to continue until the commencement of trading on Monday 12 February 2018 prior to which it will provide to the market the results of its review.

In the midst of the turmoil last year, Fletcher parted company with chief executive Mark Adamson - the final catalyst seemingly being an incendiary internal email Adamson sent regarding the problems in the B&I division, which chairman Ralph Norris publicly apologised for. Adamson has been replaced by Ross Taylor.

In the update to shareholders at the annual meeting last October, Fletcher indicated that it would make losses in this financial year of about $160 million in the B&I division. Presumably the Thursday statement from the company indicates that the damage will be considerably more than that.

The update to shareholders talked of operating earnings this financial year - excluding the troubled division - of $680 million to $720 million.

Fletcher is expecting the trading halt to continue till Monday at which point it will provide the market with more information.

As per its financial results for the year to the end of June 2017, Fletcher had over $1.9 billion of term borrowings.

Included in this was $389 million of bank loans, with this information given in the annual report:

At 30 June 2017 the group had a syndicated revolving credit facility on an unsecured, negative pledge and borrowing covenant basis, with ANZ Bank New Zealand Limited, The Bank of Tokyo-Mitsubishi UFJ Ltd, Bank of New Zealand, Commonwealth Bank of Australia, Citibank N.A., The Hongkong and Shanghai Banking Corporation Limited and Westpac New Zealand Limited. The funds under this facility can be borrowed in United States, Australian and New Zealand dollars. The borrowing covenants relate to net debt to EBITDA and interest cover and at 30 June 2017, and throughout the year, the group was in compliance with the covenants.

Then there was $1.123 billion of 'private placements', with this detail provided in the annual report:

The group has borrowed funds from private investors (primarily US & Japanese based) on an unsecured, negative pledge and borrowing covenant basis. These borrowings comprise A$231 million, US$582 million, C$15 million, EUR41 million, GBP10 million and YEN10,000 million with maturities between 2017 and 2028. The borrowing covenants relate to net debt to EBITDA and interest cover and at 30 June 2017, and throughout the year, the group was in compliance with the covenants.

Additionally, there's also $329 million in capital notes and $62 million in 'other' loans.

Waiting to see what the final figure is. NZX seems to think they violated no rules after their limp investigation. I have my doubts as there's no way for loses of this size to be concealed for so long. Their practice of buying jobs and hoping to make money from variations was always going to run into problems but they should have never concealed the issues.

A fellow had just been hired as the new CEO of a large high tech corporation. The CEO who was stepping down met with him privately and presented him with three numbered envelopes. "Open these if you run up against a problem you don't think you can solve," he said.

Well, things went along pretty smoothly, but six months later, sales took a downturn and he was really catching a lot of heat. About at his wit's end, he remembered the envelopes. He went to his drawer and took out the first envelope. The message read, "Blame your predecessor."

The new CEO called a press conference and tactfully laid the blame at the feet of the previous CEO. Satisfied with his comments, the press -- and Wall Street - responded positively, sales began to pick up and the problem was soon behind him.

About a year later, the company was again experiencing a slight dip in sales, combined with serious product problems. Having learned from his previous experience, the CEO quickly opened the second envelope. The message read, "Reorganize." This he did, and the company quickly rebounded.

After several consecutive profitable quarters, the company once again fell on difficult times. The CEO went to his office, closed the door and opened the third envelope.

So Adamson got canned, fine. But how come Graham Darlow who fortuitously retired March 2017 and who I believe headed the whole division was patted on back and told what a good job he did and no doubt got full bonuses etc???

Dictator - you pretty much correctly summed it up. Must be jarring for shareholders as despite the promise brought by the last CEO the share price didn’t do too much in a market where it should have outperformed. Its been a sad process, just watching this behemoth beach itself. This time I hope they’ve done their deligent best to uncover all that needed to be brought to light and made the big calls as to resolving their issues. Not entirely sure how they are goingvto rise to the challenge of the massive internationals with feet in the door already with fiscal resource that make Fletch look like a minnow in comparison. Legacy can be a bitch sometimes. Wait and see.

Did a key figure put his hand in our pocket to support Sky City fiasco ? or am I mistaken.

Apparently it was worth a Gamble...Not.

LOL- crony capitalism at it's best?

Used to be called OBN..

That has been Fletcher's strength/weakness for years/many decades. They have had the inside running with any government or Auckland project and they have been able to raise building material prices at whim because of their cosy/corrupt relationships. Problem is that it has lead to a fat and arrogant company that has forgotten how to be lean and efficient. It is now catching up and it serves them right. I really hope that the new government instructs the Commerce Commission to sort out the monopolies and duopoly trading abuses, particularly in the building material sector.

ChrisM
Don’t hold your breath
Building materials duopoly is a kiwi tradition
Guy came in trying to sell imported quality gib board direct to builders but was seen off . Then there’s the
dodgy piping imported by Asian interests & sold via trademe which was grossly inferior yet the NZ authorities
did nothing to prevent it’s sale Destined to leak behind walls in later years