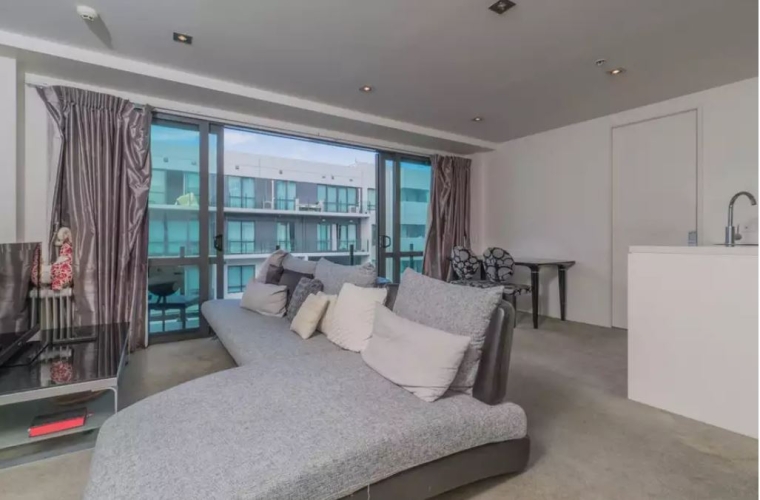 Leasehold apartments are finding favour with property investors again, and if they need repairs for weathertightness or other structural issues, then even better.

At the latest Ray White City Apartments Auction in Auckland, a two bedroom apartment on a leasehold title that was in need of remediation work to repair weathertightness and other structural issues, easily attracted the most competitive bidding of the day and was the only unit at the auction to sell under the hammer.

And those bidders weren't mugs, they were seasoned investors who knew what they were doing. The reason these types of apartments are proving so popular is all in the numbers. The apartment auctioned by Ray White was a 61 square metre unit with two bedrooms, two bathrooms, a balcony and a car park in the Docks complex which fronts onto Quay Street in Auckland's CBD.

According to QV.co.nz, the unit was originally purchased for $535,000 in 2006 when the building was new. At that time most property buyers had a very poor understanding of how leasehold titles worked and the effect that type of ownership structure could have on a property's value. So it was not uncommon for leasehold properties to sell at prices that were probably much too close to their freehold value.

By the time the property was resold in 2010, there was a better understanding of how leasehold worked, and it fetched 225,000. Then it was resold again in 2014 for $219,900. But that was before the weathertightness and other structural issues requiring remediation work were discovered.

According to Ray White City Apartments agent Dominic Worthington who handled the latest sale of the unit, the Docks complex has concrete slab construction, but needs resealing in some places and the balconies need repairs to their steel frames. He estimated the repair bill for that work might end up being an average of about $50,000 per unit.

When the unit was offered at auction on May 16 there was quite competitive bidding for it and it sold (fully furnished) under the hammer for $152,000. That's less than a third of its original purchase price. If the cost of the remediation work is treated as a capital cost, the total capital outlay for the unit would be $202,000. The current Rating Valuation for the unit (assessed on a freehold basis) is $650,000.

Worthington said the buyer was an investor who intends to keep it as a long term rental. It's currently rented at $680 a week, providing gross rental income of $35,360 a year, before allowing for any vacancy or changes in rent, which on the purchase price of $152,000 gives a gross rental yield of 23.3%.

Housing prices in Auckland having been flat for at least two years and capital gains are becoming as scarce as hen's teeth, meaning investors are increasingly having to focus on yield. According to interest.co.nz's Rental Yield Indicator, at current prices, three bedroom houses in popular rental suburbs of Auckland would likely provide gross rental yields in the 3.4% to 5.1% range. Compared to that, a net yield of 9.6% is certainly very attractive. However you would still need nerves of steel to make such a purchase.

The ground rent on the Docks apartment is reviewed on a seven year cycle and it was last up for review late last year. However the new ground rent is yet to be fixed, and considering what has happened to the property market over the seven years from 2011 to 2018, the increase in ground rent could be substantial once it's finalised, which could reduce the yield on the apartment considerably.

The details of individual properties offered at auctions monitored by interest.co.nz and the results achieved, are available on our Residential Auction Results page. 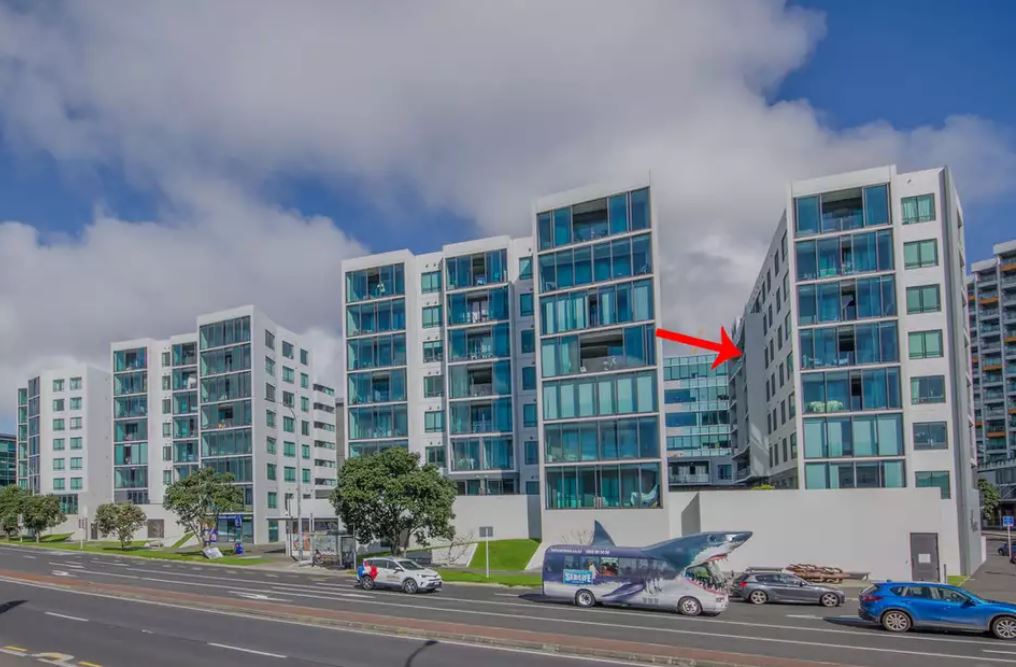 Above: The Docks complex on Quay St. 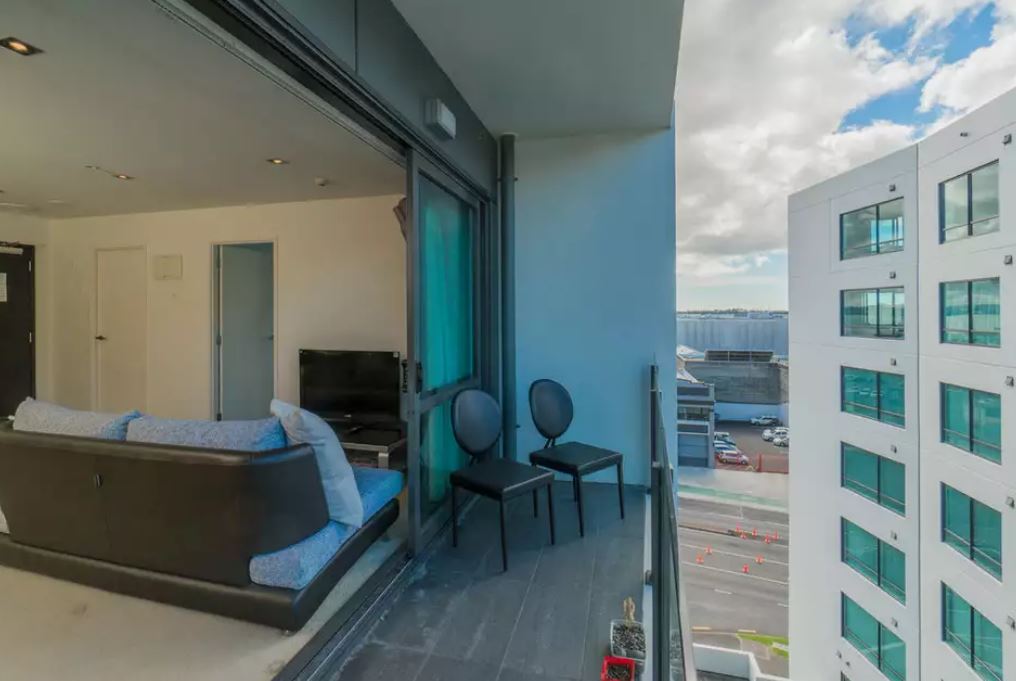 Above. The view from the balcony of The Docks apartment that sold for $152,000.

Yeah nah. Leasehold is a scam.

It's bad enough that you don't own the only appreciating asset on the property, and you have to pay rent to the person that does and they have no burden of maintenance or risk associated with it.

It doesn't work like that. Ground rent reviews are at fixed dates and set at a fixed percentage of land value, normally around 5%. If you don't agree with the new ground rent you can have it independently valued and go to arbitration. The new rent remains in place until the next fixed review date.

To "Ocelot" and "Mrs the Point". Leasehold is a losing game for the lease payer. But it isn't a short term scam, it's a long long game. The leases go up eventually, and it may be 20 years away, but that is what will happen. Look at Cornwell, where the church landowners who have been causing tears to leaseholders, have been at it for many years. Some of them have had the land for 150 years or more. (yes 150 years)
Even sixty years ago, as we progressed across Greenlane and Meadowback my dad would say. "Don't buy leasehold" Some of the problems leaseholders were having then are that same as now. And over the same land !!!!!
It's a very long game and the leaseholder is always screwed.

The only problem is that the remediation work will end up costing $200K not 50K. I bought 1 for less than land value(freehold) was projected to cost $150K and take 2 years to fix. It is now approaching $500K and 5 years. Just one last levy, has happened 4 times now.
The lack of personal control in a project like this is a big risk. Much better off buying a freestanding leaker and managing the fix personally.

That's a bit of an admission MTP since you are always giving others stick for their investment decisions etc....even the accusers are not immune to errors. And who told you the cost to repair was 150k, the real estate agent?? Dont tell me you bought the property at auction and were so intent to outbid all others.

Leasehold property investment is a terrible idea in my opinion.

Agree with the thrust of the posts above.

Buying leasehold residential property can be akin to buying a headache.......

It can soon present a whole range of problems.

As I have said before there are many apartments in Auckland that are not publicly known to be leaky, but are.
All I can say is buyer beware

I think you’re about right, Fritz.

A building inspector told me there are two types of (modern) apartment in Auckland: those that leak and those that are about to leak. (I doubt it’s really as bad as that!)

Personally, I wouldn’t have a modern Auckland apartment on my mind.

If you must have an apartment, get one from a well-maintained older block (with a good history).

Better still, buy a freehold, character house that gets good sun and has drive-on.

'Investors' can have them.

I'm sure the first buyer, who lost $310,000 on this dog, is so happy that the current owner gets a decent return.

And what does this tell us about the entire real estate industry? Shouldn't the buyers' advisers explained this to them?

"At that time most property buyers had a very poor understanding of how leasehold titles worked and the effect that type of ownership structure could have on a property's value. So it was not uncommon for leasehold properties to sell at prices that were probably much too close to their freehold value."

The way to value these homes correctly is to discount back both the rent less rates less body corporate fees with an inflation adjustment for both body corp and rates by the Rf% (govt bond yield curve) and the knock off the pv of the lease payments with an assumption for increase based off probably either CPI or historic growth.

I think you'll find the values are considerably below where you might think.

This just sounds racist. Please delete unless you wish to contribute something of value in respect to Treaty outcomes and restitution.

Yeah nah, those leasehold townhouses around Parnell worth nothing these days and paying ground lease is like taking another mortgage. One Real estate agent told me once that buying leasehold property is like finding love in prison..!