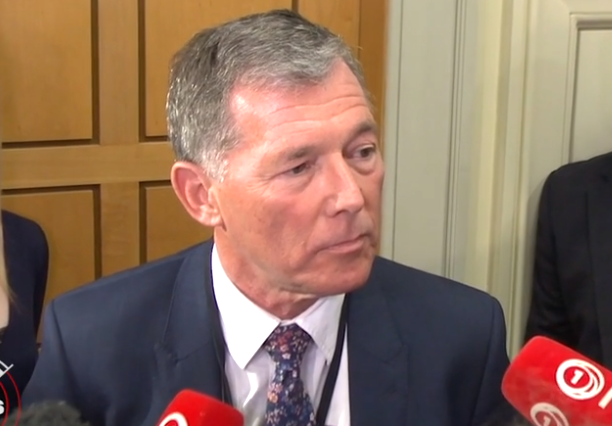 National Party President Peter Goodfellow is stepping away from the role after 13 years.

He announced on Thursday he will not seek re-election at the party's annual conference in August, but will remain as a director on the board for one final term "to assist in the transition and help provide counsel to the majority of relatively new members who joined the board less than one year ago".

A new president will be elected by the board at annual conference.

National Party leader Christopher Luxon thanked Goodfellow for "his enormous contribution" to the party as its longest serving president.

"During Peter’s tenure as president, a strong National Party machine supported the successful Key/English era. He continued through a period of change and reset, with National now being competitive once again and having our best opportunity to win in 2023," Luxon said.

Goodfellow said it had been "an honour and a privilege" to serve as president for over 13 years.

"I’ve seen highs and lows, and after much reflection, I feel the time is now right for someone else to take National into the future as president."

Goodfellow said he had intended to retire in 2016, but with the resignation of then Prime Minister John Key, "I was convinced to remain in the role to help ensure a stable transition of leadership to Bill English and to deliver our 2017 General Election campaign".

"Since 2018 I’ve worked tirelessly to help improve and diversify the skillset around our board table. To revitalise and reform the Party and its systems, and to unite our great Party after a very public period of instability and distraction. During my time, I’ve always had the best interests of the Party at heart.

"The National Party is now going from strength to strength. We have real momentum under the leadership of Christopher Luxon and Nicola Willis [deputy leader]. I’m confident we have the right people, processes, and plans in place to move the National Party forward, and I have every confidence National will win the 2023 General Election."

The National Party is now going from strength to strength. We have real momentum under the leadership of Jacinda Ardern and Grant Robertson [deputy leader].

The fresh air & energy that the Key government appeared to arrive with soon waned as the Blue Suit Brigade commenced building “Corporate New Zealand.”  New Zealanders, the man and woman on the street, as tax payers became no more important than minority shareholders in any corporate conglomerate. The departure of this president removes quite some link with that but doesn’t necessarily signal the previous culture is no longer  largely present. The new  member for  Tauranga appears to be somewhat cut from the same cloth.

PG has done a long stint at the helm during the good & not so good times, but I believe he has made the right decision here. I was half expecting it at last years conference but can see now why he waited, to help settle in new leadership. National are in a renaissance period but still need to get the selection right for 2023 if they are to be competitive. Tauranga's new MP is thoughtful & well spoken & with a face like that, has to be good at something [IT & money come to mind]. I did business with his father 30 years ago now & always found him firm but fair, so if that is in his DNA then that's also a plus. None our our political class really add up to much these days so we will never get what we really want, but at least with the Nats you won't get billions of dollars spent on behind the scenes govt services with no accountability what-so-ever. Surely, they can't be as awful as the current lot, can they?

Yes, they can. Maybe worse.

I'm not sure about that.  The current crowd are a horror show.

The problem is that National can execute but have no ideas. Today’s Labour, on the other hand, cannot execute at all and has awful ideas. In other words, we are F’d.

Luxon tightens his grip on the party. Will he prove that to win, one need not be democratic within the party ?

They don't get any better...https://www.nzherald.co.nz/nz/former-national-mp-maurice-williamson-say…

And Williamson has called for the party to re-open nominations for the National Party board, saying others would have put their names forward had they known earlier.

Goodfellow announced this morning he would retire as president at the party's annual conference in August – but still intended to seek re-election as board director.

There are three spaces on the board as the terms of Goodfellow, Rachel Bird and Sir Graeme Harrison end, but all three said they were seeking re-election. No other names were put forward by the time nominations closed on June 21. The president is elected by the board after the party's membership elects the board members.

Williamson said the board should now re-open nominations, saying more people would have put their names forward had Goodfellow's plans been known.

"A lot of people didn't put their names forward because, as David Carter has found, it's impossible to get rid of [Goodfellow]. But they wait until it's all closed and then 'Surprise!'

"After nominations closed on June 21 and nobody could do anything about it, he has now declared he's not seeking to be president any more but is going to stay on the board to 'give help and guidance' to whoever the new president is.

"That is just internal self-management of the very worst I've ever seen. The straight process of that is shockingly internal management of keeping the old boys network running. Kim Jung Un could learn a thing or two, he really could."

A spokesperson for the National Party said nominations will not re-open. Goodfellow said he did not want to respond to Williamson's comments.

Former MP David Carter was elected to the board after the 2020 election and sought the presidency – but quit in 2021 when Goodfellow was re-elected president, saying he had "zero confidence" in Goodfellow.Carter was not commenting but it is understood he had made it clear to the party that he was not prepared to work alongside Goodfellow again.Williamson also believed Goodfellow should step down altogether rather than stay on the board under a new president. He said it was akin to a chief executive of a company staying on to steer their successor.

"I'm sorry but that doesn't fit with any organisation. When you're gone, you should be well and truly gone. It's like politicians – you're a rooster today and a feather duster tomorrow."

He said he had no interest in the role himself. "Oh no, no, no. I'd rather apply for a job as an explosives expert to disarm bombs on the side of the road in Belfast than that. I've never sought or want to be involved in the party at that level."

The National Party annual general meeting will be held on Saturday August 6.

Williamson raises good points. There are many in that national who detest Goodfellow. But the analogy to the CEO is flawed. It’s not uncommon for the previous CEO to stick around, for example as the chairperson of the board, while the new CEO gets stuck in.

Good riddance to bad rubbish. A lot of the National Party's problems stem directly from his presidentship. He should just leave. New broom should sweep clean.