The Reserve Bank says a cost-benefit analysis of its plans to introduce tougher capital adequacy rules for banks shows optimal benefits would come from an even higher key capital ratio than the one it plans to introduce, and that forcing the Australian owned banks to hold higher capital levels will bolster the New Zealand tax base by NZ$25 million annually.

Yesterday the Reserve Bank released a swathe of information on its Basel III plans, confirming its previously announced timeframe for implementation, which starts next year and ends with the phase out of non-qualifying capital by 2018. Included in the Reserve Bank information released was a report entitled Regulatory impact assessment of Basel III capital requirements in New Zealand.

"On the cost side, we have allowed for the possibility that bank lending rates may increase in the short-term as banks seek to maintain their return on capital. However we have assumed this effect will be temporary," the Reserve Bank says.

"In particular, it shows that the optimal tier one capital ratio is about 13% (where the marginal benefits of additional capital equal the marginal costs in our model)."

The Basel III standards will see the tier one capital ratio, which represents shareholders' funds in the bank, rise to 6% from 4%. However, a new conservation buffer will take it to 8.5% and a potential counter cyclical, or credit bubble, buffer of up to another 2.5%, could effectively ultimately lift this to 11%, - still shy of the 13% mark.

"While 13% is higher than the Basel III minimum, the marginal benefits of increasing capital decline as capital levels rise and increasing capital beyond the Basel III minimums would deliver only relatively modest benefits," the Reserve Bank says. "Moreover, as modelling in this area is subject to considerable uncertainty (for instance the measurement of banking crises costs is not precise) any optimal capital ratio outcome should not be interpreted literally." 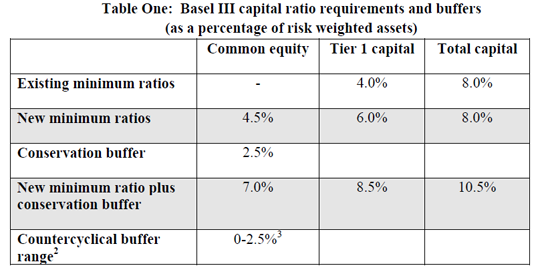 Meanwhile, the Reserve Bank assumes higher capital will shift income from a foreign tax jurisdiction, being Australia where the ultimate owners of ANZ NZ, ASB, BNZ and Westpac NZ are headquartered, to the New Zealand tax base generating a net benefit of about NZ$25 million a year. That's a drop in the ocean compared with the big bank's regular dividend payments, with ANZ alone this year set to pay dividends to its parent of up to NZ$1 billion.

"The model factors in the option of public support, such that a bank is bailed out and losses to foreign depositors are made good by the New Zealand government. Reducing the likelihood of bailouts generates a welfare gain to New Zealand from lower expected transfers to foreigners," the Reserve Bank says.

However, its analysis doesn't take account of the financial pressure bailing out all depositors and the possible recapitalisation of banks might place on government borrowing rates.

"Depending on the government's fiscal position at the onset of the crisis, reducing this potential pressure could add materially to the benefits of higher capital."

Meanwhile, PwC partner Sam Shuttleworth recently told interest.co.nz a "back of the envelope exercise" done by PwC suggested the big five banks - ANZ NZ, ASB, BNZ, Westpac NZ, and Kiwibank - collectively need to raise about NZ$460 million of tier one capital and just under NZ$2 billion of total capital (including the tier one capital) to meet Basel III standards. The PwC figures exclude NZ$400 million worth of ordinary shares issued by BNZ to parent National Australia Bank in May, which has bolstered BNZ's capital position