Rabobank's perpetual, resettable NZ$900 mln 2007 bond issue has turned out a lot better for the bank than for investors

Rabobank's perpetual, resettable NZ$900 mln 2007 bond issue has turned out a lot better for the bank than for investors 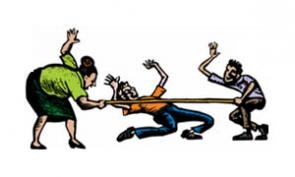 The interest rate on New Zealand's biggest non-government debt issue has had its annual reset. But it's unlikely to result in investors in this particular bond popping champagne corks.

The perpetual bonds were issued by Rabobank in October 2007 when New Zealand finance companies were falling like dominos. More broadly the world was beginning to hear quite a bit about US subprime mortgages, and a financial crisis that would ultimately be known as the Global Financial Crisis, or GFC, was getting underway.

Sold in retail investor friendly minimum parcels of $5,000, Kiwi investors couldn't get enough of the Rabobank bonds. Not surprising given the initial interest rate, set in October 2007, came in at a whopping 9.482%. This was with a margin on the bonds of 76 basis points over the one-year swap rate. Remember, unlike today, 2007 was a time of high interest rates.

Ultimately $900 million of the Rabobank bonds were sold, including $500 million worth of oversubscriptions, in New Zealand’s largest ever non-government debt issue. The issue's arranger Credit Suisse and joint lead managers First NZ Capital and ASB must have had quite a celebration. And Rabobank's management must have been pretty chuffed too, locking in $900 million of long-term funding.

But the problem for investors has been the subsequent low interest rate environment, given the interest rate is reset annually at the same margin of 76 basis points over the one-year swap rate.

Pushing 8.7% when the Rabobank bonds were issued nine years ago, the one-year swap rate sank to just 1.99% in August, and on Friday was just 2.12%. Thus the interest rate investors will receive for the next 12-months is just 2.8825%. It's the lowest interest rate holders of the Rabobank bonds have received to date, as demonstrated by the table and chart below. 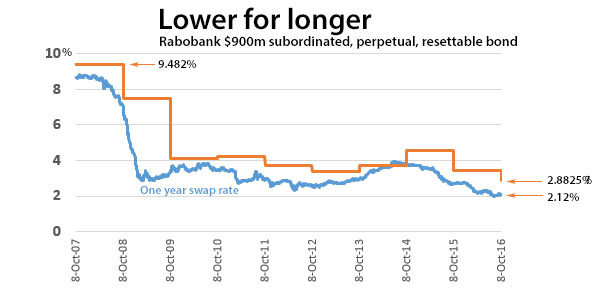 'Our old-fashioned model works out in these situations'

This is the last time the interest rate will be reset annually. From the 8th October next year, the interest rate will be reset quarterly at 76 basis points over the 90-day bank bill rate. Rabobank has the discretion to call the bonds, which trade on the NZX debt market, in October 2017 being 10-years after the original issue date. This morning the bonds were trading at $95.4 per $100, a discount to their face value.

Visiting New Zealand promoting the bond issue in 2007, Rabobank's chief financial officer Bert Bruggink talked up the bank's conservativeness, as I reported at the time.

Mr Bruggink said the New Zealand securities offer had been on the drawing board for a year. He told Auckland brokers that he had not heard of subprime mortgages till recently. There were none on Rabobank's books.

Mr Bruggink said Rabobank should benefit from the global credit squeeze. A couple of months ago credit spreads had become so compressed that Rabobank's advantage over rivals with weaker credit ratings had been negated. This had now changed.

"The opportunities for us given the current market circumstances are probably better than over the last couple of years," he said. "Our maybe old-fashioned model works out in these kind of situations."

All that is, however, cold comfort for investors in the bonds given the way their interest payments have dwindled. Rather, this is a salutary lesson in the dangers of investing in perpetual securities with resettable interest rates. Especially in a lower for longer interest rate world.

As an ex-banker , I can assure you the banks funding costs ( best modeled around the Weighted Average cost of Capital ) in relation to what they charge is eye-watering .

This example is somewhat unusual , but Banks seldom lose on margin whether the Central bank rates are going north or south .

Mostly a Bank's losses are due to " non- performing loans' ( which we call bad or doubtful debts ) when rates go up , or markets wobble ( severely)