Terry Baucher looks at the IRD's clarifications of the tax residency rules, explains what’s expected for owners of overseas rental property and the Department of Internal Affairs makes a bone-headed ruling

Terry Baucher looks at the IRD's clarifications of the tax residency rules, explains what’s expected for owners of overseas rental property and the Department of Internal Affairs makes a bone-headed ruling 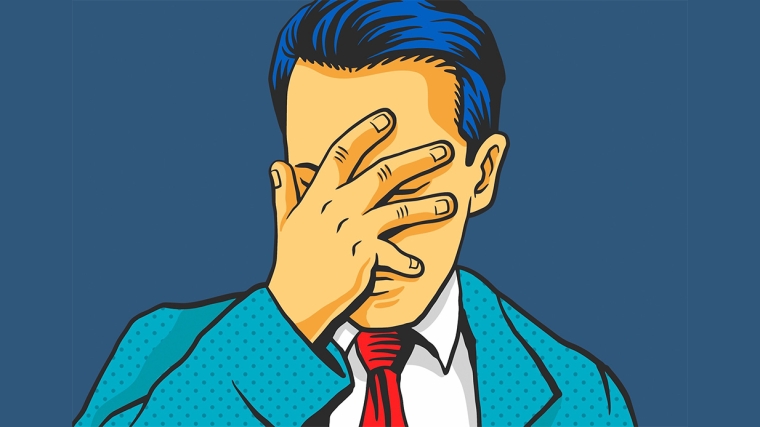 This week, the latest from Inland Revenue on its response to the Covid-19 pandemic. Inland Revenue releases draft guidance for consultation on the tax implications of owning overseas rental property, and the Department of Internal Affairs isn't really helping.

Inland Revenue has been releasing updates on its interpretation of various tax issues arising out of the Covid-19 pandemic. The latest release on Wednesday was a public statement regarding residency issues.

In a previous podcast I raised the question of what is going to happen to people who may inadvertently become tax resident of New Zealand either because they fell sick or were not able to leave when they intended to because of border closures. Subsequently, they then become tax resident under the days present test, that is they've been present in New Zealand for more than 183 days in any twelve-month period.

In this instance what the Inland Revenue guidance says is that an individual will not become tax resident in New Zealand under the days present test just because they become stranded here. They will be treated as non-resident if they leave New Zealand within a “reasonable time after they are no longer practically restricted in travelling.  Then extra days when that person was unable to leave will be disregarded. The day tests are based on normal circumstances when people are free to move.”

Now this is good to hear. But I'd feel more comfortable advising clients on this if we had some form of statutory basis to this interpretation. As it stands this is at Inland Revenue’s discretion. And I do know of pre-Covid-19 instances where a person has been deemed to be tax resident even though they fell sick and were unable to travel. In my view there’s no difference between not being able to travel because of the Covid-19 pandemic and the resulting travel restrictions around that and not being able to travel because you're physically sick.

The United Kingdom has a specific clause in its legislation excluding days where someone is not able to travel because of sickness, ill health, either of themselves or of a relative.  I think it would ensure future clarity a similar provision was actually legislated for, maybe, later on in the year. But anyway, as a temporary measure, it's good to see the Inland Revenue has taken this approach.

Next week we should see the legislation relating to the loss carry-back provisions. The general consensus forming around small business advisers and fellow tax agents is that although it's a measure which is useful in the long term, right now because of the timing of how everything has happened, it's probably not terribly significant for a lot of small businesses.

That said, tweaks people are considering tweaks to make it more user friendly for small businesses. One of the issues that's being addressed during consultation with Inland Revenue, which is going on at the moment, is about possibly allowing shareholder-employee salaries to be reduced, too.

At present if a shareholder has an overdrawn current account, i.e owes the company money, then interest of 5.77% is chargeable on the overdrawn balance.  The problem is revising the shareholder-employee salary to utilize the loss carry-back rules may worsen the shareholder current account balance. So people have been suggesting whether some sort of a workaround could be introduced to resolve that matter. We'll see what comes out when the legislation is released on Tuesday or Wednesday next week.

Moving on the normal everyday compliance matters and consultation programme for Inland Revenue still continues to run along, even though right now Inland Revenue policy resources are very much focused on producing answers to the Covid-19 pandemic. And so, it's easy to have overlooked a couple of draft Interpretation Statements which were released just before the country went into lockdown.

The first of these is an Interpretation Statement on tax issues arising from the ownership of overseas rental property. The Interpretation Statement begins with a reminder that New Zealand tax residents are taxed on their worldwide income and gives a quick overview of the residency rules.  It outlines the New Zealand principles about recognition of income and expenditure as these rules may differ from an overseas country. Goes on to explain what you can do if you are required to prepare tax returns in an overseas to jurisdiction to a balance date other than 31 March and how to calculate the conversion of foreign income into New Zealand dollars.

Apart from covering overseas rental income and income from the sale of the property, the Interpretation Statement also explains the very often frequently overlooked and horrendously complicated financial arrangement rules.  These relate to the foreign currency gains on a mortgage that may be taken out to purchase overseas rental property.

Finally, the Interpretation Statement also covers off a taxpayer’s entitlement to foreign tax credits and the application of double tax agreements. Overall, it's a very comprehensive document.  Submissions are due by the end of the month but given current circumstances, Inland Revenue will take submissions past that date.

A related Interpretation Statement has been issued on the application of the financial arrangements rules to foreign currency loans used to finance overseas rental property.

Regular readers will know that I have discussed these from time to time. These basically are the quantum physics of New Zealand tax. They are mind numbingly complicated and frankly were not, in my view, really intended to apply to Mum and Dad investors with an overseas property.

The Interpretation Statement is a very useful overview of the issues involved. In fact, it's the first time to my knowledge that Inland Revenue issued something on this topic that's quite digestible for the general public.  It’s therefore going to be useful for advisors to be able to be point out to clients “These are the rules Inland Revenue is applying”.

One way that this could be resolved would be to raise the thresholds around the application of the rules and maybe rethink over the policy intent and application. Who exactly should be covered by the financial arrangements rules and consequently face a quite hefty compliance burden?  The rules often result in an irony in some cases, where for New Zealand tax purposes, the sale of the property should not be taxable, but the redemption of the mortgage may trigger taxable income.

And finally, from the “You really aren't helping” files, a ruling from the Ministry of Justice and the Department of Internal Affairs relating to their administration of the Anti-Money Laundering and Countering Financing of Terrorism Act.

A matter of interpretation for some time was whether the use of tax pooling arrangements such as those made through companies such as Tax Management New Zealand would be subject to these rules.

Apparently on April 20th, the Ministry of Justice advised the Chartered Accountants Australia and New Zealand that it would deny an application for an the exemption because there was a “medium risk” of money laundering and terrorism financing being associated with tax transfers. 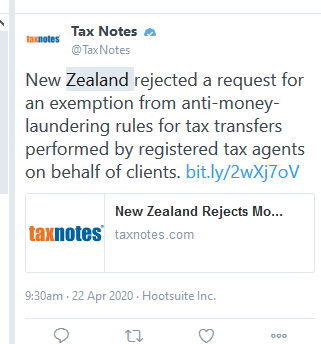 I really cannot express how mind numbingly exasperating this decision is, and it's going to affect a lot of taxpayers going forward because of what's going on right now with the Covid-19 pandemic as a result of which tax transfers are going to become quite important. So basically, we have Inland Revenue doing its best to try and make matters as easy as possible and the Government’s general policy trying to assist taxpayers through this pandemic.

And then we have the Ministry of Justice and the Department of Internal Affairs taking a very juristic approach to the matter and completely contrary to the wider policy going on. I really can't express how frustrating this decision is. This was something really should've been sorted out way, way before. Accountants have been subject to the AML legislation since 1st of October 2018, and 18 months on we are only just getting a decision like this.

I said way back that I thought the DIA and the Police Financial Intelligence Units were under-resourced. I consider the whole AML approach was needlessly bureaucratic with a lot of duplication and frankly, probably not really achieving very much. And in a nutshell, this decision actually exemplifies all those points.

Anyway, that's it for this week. I'm Terry Baucher and you can find his podcast on my website. www.baucher.tax or wherever you get your podcasts, please send me your feedback and tell your friends and clients. And until next time Kia Kaha stay strong and be kind.

This article is a transcript of the April 24, 2020 edition of The Week In Tax, a podcast by Terry Baucher. This transcript is here with permission and has been lightly edited for clarity.

Ha ha.. Kiwis, just before Sir JK abandoned the ship, ..NZ is robust with it's AML activities, the statement is as robust as our border on screening the Covid-19 - Even for the next Covid-19 apps tracking system. Anyone from underground criminal activities, gangs,.. more AML interested on that apps? - Tui Ads first come to mind.

AML just seems like a massive additional bureaucratic cost and a huge security risk. Treating everyone as criminals until proven innocent is a stupid policy. It makes it easier for criminals to hide. It is divisive. It creates databases held on unsecure servers. Stupid rules destroy faith in our social institutions. New Argentina here we come. Complete folly.