Keynes ruled for 40 years. Then, a counterrevolution took hold, reflecting sharp criticism of his fiscal activism. After another 40 years, Keynes’ key idea is back, and Japan, for one, desperately needs to take it on board

Keynes ruled for 40 years. Then, a counterrevolution took hold, reflecting sharp criticism of his fiscal activism. After another 40 years, Keynes’ key idea is back, and Japan, for one, desperately needs to take it on board
29th Dec 16, 2:24pm
by Guest 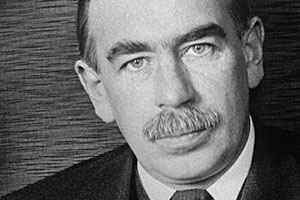 In the fourth century, Japan’s emperor looked out from a small mountain near his palace and noticed that something was missing: smoke rising from people’s kitchens. While there were some faint trails here and there, it was clear that people were facing such harsh economic conditions that they could barely purchase any food to cook. Appalled at the circumstances of the Japanese people, who were largely peasants, the emperor decided to suspend taxation.

Three years later, the palace gates were in disrepair and the stars shone through leaks in the roof. But a glimpse from the same mountain revealed steady plumes of smoke rising from the peasants’ huts. The tax moratorium had worked. The people were so grateful to the emperor – who became known as Nintoku (Emperor with Virtue and Benevolence) – that they volunteered to repair his palace.

Almost two millennia later, the Japanese people are, again, under economic pressure. A steep hike in the consumption tax in 2014, together with another hike expected in the near future, has undermined household spending. As in the Nintoku story, it is the wealth of the people – not that of the government – that dictates consumption.

Of course, the wealth of the government does play a role in economic performance. But excessive concern about government’s solvency can cause the private sector to be reluctant to spend. That is what has happened in Japan.

Excessive government debt can be highly damaging. In inflationary periods, high outstanding government liabilities impair fiscal policy, because higher taxes are needed to finance the same level of real government spending. Making matters worse, governments can be tempted to inflate their debts away – a power that has been abused since the age of monarchs, resulting in a uniform inflation tax on asset holders.

But large public debts are not always bad for an economy, just as efforts to rein them in are not always beneficial. The focus on a balanced budget in the United States, for example, has led some elements of the Republican Party to block normal functions of state and even federal authorities, supposedly in the name of fiscal discipline. Likewise, the eurozone’s recovery from the 2008 financial crisis has been held back by strict fiscal rules that limit member countries’ fiscal deficits to 3% of GDP.

To understand the relationship between public debt and economic performance, we should look to the fiscal theory of the price level (FTPL), a macroeconomic doctrine that has lately been receiving considerable attention. In August, at the annual conference of central bankers in Jackson Hole, Wyoming, Princeton’s Christopher Sims provided a lucid explanation of the theory.

As Sims explained, contrary to popular belief, aggregate demand and the price level (inflation) are not dictated only – or even primarily – by monetary policy. Instead, they are determined by the country’s net wealth and the liabilities of the central bank and the government.

When government deficits are lower, investing in government debt becomes more attractive. As the private sector purchases more of that debt, demand for goods and services falls, creating deflationary pressure. If the central bank attempts to spur inflation by expanding its own balance sheet through monetary expansion and by lowering interest rates, it will cause the budget deficit to fall further, reinforcing the cycle. In such a context, Sims argued, monetary policy alone would not be adequate to raise inflation; fiscal policy that increases the budget deficit would also be necessary.

The FTPL provides a clear diagnosis of the Japanese economy’s problems – and points to solutions. When Abenomics was introduced in 2012, a massive injection of liquidity by the Bank of Japan was supposed to offset deflation. But, as both traditional Keynesians and FTPL followers would note, quantitative easing – which amounts to an exchange of money for its close substitutes (zero-interest bonds) – becomes less effective in stimulating demand over time. Add to that Japan’s fiscal tightening – and, especially, its consumption-tax hike – and it is no surprise that demand has remained repressed.

More recently, Japan’s negative-interest-rate policy worked rather well to push down market interest rates. But the policy also impaired the private sector’s balance sheet, because it functioned as a tax on financial institutions. As a result, it has failed to provide the intended boost.

During periods of recession or stagnation, additional interest payments by banks would burden the economy, whereas public debt may enable the economy to reach full employment. (Neo-Ricardians would argue that public debt in the hands of people is worthless, because consumers internalize their children’s future tax payments by holding debt certificates. But, as David Ricardo himself recognized, people are rarely that smart.)

John Maynard Keynes’ The General Theory of Employment, Interest, and Money, which argued for active fiscal policies, was published in 1936. Forty years later, a counterrevolution took hold, reflecting sharp criticism of fiscal activism. After another 40 years, Keynes’ key idea is back, in the form of the FTPL. This may be old wine in a new bottle, but old wine often rewards those who are willing to taste it.