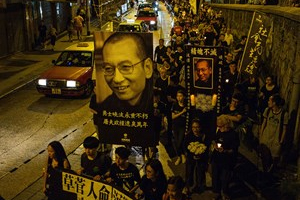 It also sent a strong message: the Chinese Communist Party (CCP) leadership is committed to defending its political monopoly by any means and at any cost.

The 61-year-old Liu, a former literary critic and high-profile champion of human rights and non-violent resistance, spent the last eight years of his life behind bars on trumped-up charges of “subversion.” His real offense was to call for democracy in China. Even before his imprisonment, he faced constant police surveillance and harassment. When he was awarded the Nobel in 2010, the Chinese authorities not only prevented his family from traveling to Oslo to accept the prize; they placed his wife under house arrest.

The Chinese government’s final affront against Liu came last month, when it denied his request to receive treatment for advanced liver cancer. It was an act of senseless cruelty – one that led to Liu’s death, in police custody, barely a month after he received his diagnosis. The last time a Nobel laureate met such a fate was in 1938, when the German pacifist Carl von Ossietzky died in Nazi detention.

It might seem inexplicable that China, which has spent a fortune in recent years to project “soft power” abroad, would be willing to place itself in such company. But, as much as they aspire to a leading role on the world stage, China’s leaders want to suppress dissent even more. And they probably expected little reaction from Western democracies, many of which are now in disarray.

So far, that calculation seems to have been correct. The authorities’ mistreatment of a revered advocate for human rights and democracy elicited some grumblings in Western capitals, with leaders like German Chancellor Angela Merkel lamenting the death of a “courageous fighter.” But no major Western leader has publicly denounced the Chinese government’s conduct.

Moreover, by denying Liu’s dying wish to live his final days in freedom abroad, the government avoided an embarrassing spectacle: a public funeral for Liu attended by tens of thousands of his supporters and admirers. Liu’s tomb would have become a political monument, an eternal symbol of defiance against autocratic rule. Meanwhile, China’s censors have worked overtime to ensure that Liu’s death is a non-event.

The Chinese regime could have withstood such embarrassment, just as it could have survived an international uproar. The CCP remains a political behemoth, with nearly 90 million members, and its capacity to defend its power is vast. Decades of rising living standards have boosted the CCP’s legitimacy to an extent few could have imagined back in 1989, when Liu first rose to prominence at the Tiananmen Square protests.

But the CCP regime is far from invincible. On the contrary, it suffers from some fundamental weaknesses – beginning at the highest level of government.

Under President Xi Jinping, the “collective leadership” that has prevailed since the death of Mao Zedong has increasingly been replaced by strongman rule. Xi’s political purge, conducted as an anti-corruption campaign, has lately been reinvigorated, leaving the rank and file of the party-state demoralized by the disappearance of their perks and fearful of becoming the next target. As the unity of the political elite erodes, the regime becomes increasingly fragile.

Slowing income growth is undermining the regime further. The promise of rising material prosperity forms the foundation of the CCP’s claim to legitimacy. Yet the investment-driven growth model that has enabled China’s economic miracle over the last 30 years has run its course.

The backlash against globalisation in recent years, reflected in Brexit and the election of US President Donald Trump, introduces an additional element of uncertainty to China’s economic future. China’s leaders may be attempting to shift toward domestic consumption-led growth, but the reality is that the economy remains heavily dependent on exports. If protectionism takes hold in China’s key overseas markets, the country’s economic prospects – and thus the CCP’s legitimacy – could quickly decline.

Ironically, as decades of economic growth strengthened the CCP’s position, rising prosperity also created favorable structural conditions for a democratic transition. In fact, China has already reached the per capita income level at which nearly all autocracies in non-oil producing states fall from power.

Of course, when economic growth falters, as is now the case, the CCP can turn to ruthless repression and appeals to nationalism to fend off challenges to its hold on power. But the effectiveness of such an approach is limited. The economic and moral costs of escalating repression would eventually lead to domestic turmoil that not even the world’s most powerful one-party state could conceal.

Against this background, it seems clear that, far from a sign of strength, the Chinese regime’s mistreatment of Liu amounted to an indication of its weakness, insecurity, and fear. At some point, probably within the next two decades, the combination of internal rot and external pressure from a population demanding freedom will bring down one-party rule in China – and, one hopes, usher in the kind of open society that Liu fought for all his life.

Watched a doco regarding Hong Kongs future yesterday.
The old school aren't going to let HK stay as it is by the sound of thing.
The Chinese Pinko party are going to suck HK back into its fold.
Get out if you can.

Yes I also read an article recently of how China is building a new city close to HK to gradually absorbed it .So it looks highly unlikely that they'll remain independent.

Take a look at Google map of Hong Kong (pop: 7.3 mln). Then draw back to see Shenzhen (pop: 11.9 mln), and then wider to Guangzhou (pop: 14 mln). Hong Kong is minor in the general area. Guangdong province has a population of 105 mln. Unless it is carved out as a 'special' area, it will quickly become irrelevant. Hong Kong is only 'important' from our [colonial?] perspective. From Beijing's point-of-view, it is hard to see what the fuss is all about.

Probably because Hong Kong is a symbol of western independence and China is simply not going to have that today. China will change over time, the younger generations will see to that but the question is will it happen fast enough to save Hong Kong ?

How do you propose they are going to do that? Vote out the current regime? Protest in Tiananmen Square? Stand in front of a tank? Be outspoken via their art?

Hong Kong used to be, like Singapore, more or less a country inside a city. In those days HK was both a buffer and essential trade & social link between China & the west. That has all gone & as well China has anyway subsequently & massively opened its borders, developed sea & air traffic. Hong Kong when it was in its own sort of colony world, thrived on vast trade, tourism, but this was purely transitory stuff because of its unique position. So yes China could always eat Hong Kong, just a matter of when. Purge out all that western decadence & corruption, replace it with their own.

And isn't it funny how those of us who have tried and tried to point out things like Silver Fern Farms falling into the control of such a regime, and it has, just get blown away with epithets such as "xenophobic" and "naive"

Vested interest for short term cash > ethical and moral considerations, for some who want as much of NZ sold to push up land prices as high as possible.

"Rex Tillerson, the United States’ Secretary of State, expressed condolences over the death of Mr Liu and called on Beijing to release his wife, Liu Xia, and allow her to leave China."
http://www.telegraph.co.uk/news/2017/07/13/human-rights-activist-nobel-w...
Yet, as the article shows, most of the West and Media stay muted in this political mistreatment.
Re HongKong: notice the Internet is still largely unfiltered/non-firewalled compared to mainland China. Shanghai is a hopeless place for Internet use.

The current Chinese system enjoys a considerable amount of support from its people, even ex-pats. People like Liu Xiaobo are often viewed as a little strange or tools of the West by the ordinary man in the street. I think that ordinary man is probably right when he suspects that the West probably doesn't have China's best interests in mind when they push for democratic reform in China..

Agreed, centuries on centuries of totalitarian rule. Just like Russia, the people expect it and are conditioned to it. Doesn't really make much difference as to who rules, be it an Emperor or a President, so long as someone is totally in charge.

and you even have been to China? Or better lived and worked amongst the Chinese for 6 years living like a Chinese person in a Chinese only quarter (of Beijing) speaking only Mandarin for much of the time? Travelled the length and breadth of China by the same method?

Bet not, because you have no idea.

Therefore the mass line has never existed and even if it did it was inconsequential and Chairman Mao never thought that political power grows out of the barrel of a gun.