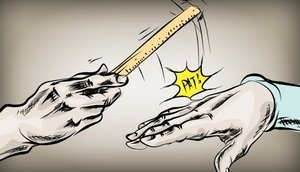 The Department of Internal Affairs (DIA) has issued a formal warning under the Anti-Money Laundering and Countering Financing of Terrorism Act (AML/CFT Act) to ECS Limited, a company service provider operating via a serviced virtual office in downtown Auckland.

In May interest.co.nz wrote about ECS Ltd noting it was providing services to four questionable New Zealand registered, but seemingly overseas operating financial service providers from the Regus Business Centre in Auckland's Zurich House, four floors above the Serious Fraud Office. We also reported that the four financial service providers all had Gold Coast woman Taya Burnett, who appeared to be the partner or wife of notorious shell company peddler Ian Taylor - of SP Trading fame - as their required NZ or Australian domiciled director.

The DIA says it undertook a visit to ECS Ltd on June 8, a desk-based review of the company's written AML/CFT procedures, and a further on-site inspection on August 23.

"The Department required ECS Ltd to take immediate action to rectify all areas where it was non-compliant with its AML/CFT obligations. It will continue to monitor ECS Limited and consider further enforcement action if it engages in conduct that does not comply with the AML/CFT Act."

Formal warnings are issued when a supervisory agency such as DIA, tasked with overseeing trust and company service providers for compliance with the AML/CFT Act, has reasonable grounds to believe a reporting entity has engaged in conduct that constitutes a civil liability act. DIA says potential civil or criminal action could result in;

Companies Office records show ECS Ltd's sole director and shareholder as Denis Petrov. He provides a Gold Coast address. The company was registered on January 24 this year. Petrov's LinkedIn profile says he provides incorporation and secretarial services in the Asia-Pacific, and works for Tak Chau Loi Group in Hong Kong.

Also see: It's time to end the madness, and 'That sounds like the sort of conclusion someone who believes in the Tooth Fairy would draw', plus The 83 countries where NZ's FSPR has left its mark & not in a good way.

I have to take issue with the image used to illustrate the penalty. Shurely it should be of a Wet Bus Ticket, not of a Ruler?

I searched but couldn't find an image of a wet bus ticket...

Gareth, if there now was, it would become one of the most commonly used images these days lol!

Keen eye for details you got there. Very true indeed ;)

Well done. One has to ask why it takes Interest to point this out. What are all the over paid government servants who are being employed to find this sort of stuff doing?

Absolutely! I have a friend who used to work for IRD, to gather evidence of money laundering. They said NZ is at least 15 years behind the rest of the developed world.

Hopefully Labour will reverse the axing of 1,500 IRD staff that National proposed as well, it's almost as if there was a desire to turn us into a banana republic tax haven.

The cynic in me suggests that is exactly what they were trying to do.

I think the DIA's printer must have run out of ink before the final 'Questions & Answers' on its media release. Fortunately, the transcript has been passed to me:

Q: How did you hear about this ECS outfit?
A: Do you really want to know? Okay, I'll tell you, while no-one's listening. Well, there's this website called 'Interesting' or 'Interest' or something. Someone here saw it one day. Just by chance, I mean. It's a kind of investigative, trouble-making place, a whole lot of nosey-parkers if you ask me. Always wanting to spread information around. And how can we do our jobs with this prying going on? It just makes extra work for us. My tea's cold already. And it damages our reputation, the reputation of the whole country, bringing all this stuff up. I mean, who needs to know? Nobody, if you ask me. And anyway, whatever they've done, this ECS place, nothing much will happen to them. We make sure of that. And it's not as if they're on their own. If we looked we'd probably find lots of other places much the same. So I say, why bother? Why not just leave them alone. But I just work here. By the way, you're not going to tell anyone this are you? But I've got to go now, quick, my boss is coming.