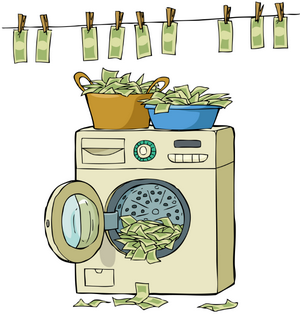 The work of trust and company service providers, plus the use of shell companies and alternative banking platforms all feature in the New Zealand Police Financial Intelligence Unit's (FIU) 2018 National Money Laundering and Terrorism Financing Risk Assessment.

The report notes that overseas criminals who seek to abuse New Zealand legal structures are a known money laundering threat, with difficulties in identifying the beneficial owners of NZ companies, charities and trusts.

"Typically, a New Zealand entity, such as a company, limited partnership or trust, is used within a complex network of companies and trusts from other jurisdictions as a vehicle for money laundering without any transactions occurring in New Zealand," the report says.

The Police don't tend to comment when asked about specific cases of clear or potential nefarious behaviour by NZ shell companies overseas. Interest.co.nz has asked questions about many specific scenarios over recent years and typically received a "no comment" from the Police. Thus it's interesting to see the Police acknowledge the use of NZ shell companies for money laundering and other crimes.

"Overseas partners report money laundering facilitated by New Zealand shell companies largely originates overseas - flowing through bank accounts most commonly in Europe or offshore jurisdictions. In a sample of international requests to the FIU, 60% of requests where a link to New Zealand was established related to a New Zealand company. In 75% of those cases no New Zealand bank accounts were identified," the report says.

"Requests from overseas partners for information to the FIU indicate that there is a risk that the financial system is abused as a conduit. In the instances where a New Zealand financial institution account was identified, the account was typically associated with a company or business. This indicates that overseas offenders prefer to use New Zealand company accounts rather than personal accounts when moving money through New Zealand."

"The association between New Zealand shell companies and international illicit transactions has been widely reported, most notably following the Thai interception of arms from North Korea on an aircraft leased by a New Zealand registered company in 2009. There have also been a number of less well publicised cases involving complex international money laundering in Eastern Europe. New Zealand shell companies have been involved in international cases relating to tax offending, money laundering, investment fraud and smuggling of illegal goods," the Police FIU says.

The report makes the point, often made by interest.co.nz, that NZ's good international reputation plus the ease of setting up companies, doing business and low business costs here, are equally attractive to illegitimate business as legitimate overseas business.

"New Zealand consistently scores well on the World Bank Doing Business rankings due to ease of doing business and comparatively low business costs. The straightforward, business-friendly taxation system that supports capital development and international investment may also be attractive to transnational money launderers and terrorist financers. Unlike many countries, New Zealand does not have currency controls and does not tax movement of capital. As with legitimate business, these factors reduce the cost of business for money launderers, and reduce the effort required to remain compliant with government requirements."

"While these factors may help to prevent illicit capital entering the economy; transnational criminals who are successful in moving proceeds through New Zealand benefit from an air of legitimacy from New Zealand’s reputation. As the New Zealand economy continues to integrate into the regional and international economy, it is likely that the threat and risks posed by illicit capital flows will increase."

The report points out that typically, a money launderer will arrange for a professional to set up a company or trust, then act in a proxy role. Alternatively the money launderer may arrange for a third party to act in this role, which can include acting as a trustee, nominee resident director, or nominee shareholder.

"Money launderers, and especially transnational launderers, may also use professionals to set up and manage bank or trading accounts creating a layer between the financial institution and the ultimate customer. With the fiduciary role appearing legitimate, the money launderer is able to conduct a range of criminal activity or asset transfers at arm’s length from both regulatory and law enforcement agencies."

The Ministry of Business, Innovation & Employment is considering whether a public central register of company beneficial ownership information should be established.

Meanwhile, last year I pointed out that trust and company service providers based all around the world are free to establish NZ companies for clients who are also based all over the world. According to the Police FIU, about 70% of local trust and company service providers offer services to international customers while about 20% don't specify whether international services are offered.

"Trust and company service providers often do not directly conduct transactions but instead provide a company or trust structure that is used to facilitate transactions. As such, the value of international payments through the sector is likely to be low, while the value of international payments facilitated by the sector is likely to be much higher and relate to a wide range of financial activity," the report says.

"The nature and number of international requests to the FIU offer some insight to the types of transnational threats posed to New Zealand by the requesting jurisdictions. Analysis of those requests indicated that in the majority of cases the link to New Zealand was more likely to relate to use of New Zealand legal structures as shell companies, or in a few cases to facilitate offending through various alternative banking platforms, rather than a substantive link to the New Zealand financial system."

"In particular, where the requesting jurisdiction is remote from New Zealand, most requests relate to economic crimes facilitated by corporate structures. In these requests, money laundering, corruption and fraud are the most commonly identified offences. However, requests remain varied where the requesting country is closer to New Zealand, or has strong traditional cultural/economic ties with New Zealand. In addition to financial crimes and corporate structures, such countries may also request information relating to drug and organised criminality facilitated by abuse of New Zealand bank accounts, businesses, alternative remittance and casinos," the report says.

Alternative methods of moving value and funds are described as "highly vulnerable to displacement of illicit activity away from the financially regulated sector."

'Transnational money launderers may be attracted to NZ real estate'

In terms of real estate, the report notes transnational laundering through real estate has received a high degree of media interest in NZ, but hasn't been common in international requests to the FIU.

"Significant transnational money laundering has been identified in real estate markets in similar countries to New Zealand, such as Australia, the United Kingdom and the United States. Given the similarities of the New Zealand real estate market to these countries’ markets, it is possible that launderers active in the international market may be similarly attracted to New Zealand. Where cases of misuse of New Zealand real estate by overseas criminals has occurred, these have included offending involving high values of proceeds creating significant money laundering threat."

Meanwhile, the Police FIU estimates $1.35 billion of domestic criminal proceeds is generated for laundering in NZ annually, with $750 million from drug offending, $500 million from fraud, and $100 million from other offences such as burglary. These estimates exclude tax offending and overseas predicate offences. This estimate follows a 2010 estimate of $1.5 billion.

"Given the nature of generating these estimates, these figures give only an approximate indication of the scale of money laundering, and are not precise enough to compare to previous estimates to indicate any change in laundering over time. The actual transactional value of money laundering is likely to be several times the $1.35 billion estimate of money generated for laundering, as launderers need to move funds through multiple transactions to place, layer and integrate proceeds of crime," the report says.

"It’s surprisingly common for authorities to base money laundering claims on percentages of GDP estimates with no evidential foundation. Instead, NZ Police seems to have applied genuine critical thinking, without falling into the various assumptions of an industry narrative. For example, they’ve tried to calculate the extent of money laundering without resorting to the lazy option of using ‘mythical numbers’ as artificial ‘problem amplifiers’. It still involves guesswork, and they’ve openly skipped a couple of important areas, but there’s actually some rigour to it," says Pol.

"They also frankly acknowledge realities often glossed over. It’s great that New Zealand is an easy place to do business. But that also makes New Zealand an easy mark for criminals using our companies, trusts and professional services firms. Likewise, they mention increasing numbers of suspicious transaction reports, but plainly say that doesn’t necessarily translate into more, or less, criminal transactions."

"The result is a better document. But, more importantly, it gives NZ Police a better line of sight to serious crime, without the blinkers of unfounded assumptions, or pressures to produce the ‘right’ numbers to support any particular narrative getting in the way. This shouldn’t be uncommon. But the uncomfortable truth is that it is. So, all credit to NZ Police. The ‘real oil’ might be in the restricted version, but the public version is at least a useful indicator of uncommon competence," Pol adds.

*Here are the FIU's latest quarterly statistics on the suspicious transaction reports it has received.

Start a business in USA from abroad
https://howtostartanllc.com/open-a-company-in-the-usa
Pass through taxation on LLC s
Enjoy

Yep, ironic eh. The country that really pushed the AML/CFT drive also has elements enabling ML. So, NZ is certainly not alone in this regard. Some say the incongruity is so great, and AML/CFT so ineffectual, that it must have another purpose. If so, it'll need a smoking gun for proof. My working hypothesis is simpler. The AML/CFT camp is genuine. Ditto the business protection camp. Both are tremendously busy, and earnest, with good arguments each. But neither 'gets' the other, and the pollies don't stitch them together, so the gaps remain, and the crims continue sailing on through, in the US, NZ,..