Heartland Bank’s proposed restructure will leave its burgeoning Australian reverse mortgage business free from the capital requirements of regulators on both sides of the Tasman, and subject only to the oversight of the group’s own governance and lenders.

Along with its annual financial results, Heartland on Wednesday issued the scheme booklet for its proposed restructure.

“The capital requirement of our Australian business will be driven by good governance [and] by what's required by our various funders rather than by the regulatory requirements of the Reserve Bank,” Mackrell said.

Heartland is enjoying strong growth in the reverse mortgage market.

Heartland entered the reverse mortgage market on both sides of the Tasman in 2014 after buying Sentinel in NZ and the Australian Seniors Finance business for NZ$87 million from the Quadrant Private Equity controlled Seniors Money International. Heartland Seniors Finance accounted for 69.9% of total Australian reverse mortgage market growth in the 12 months to December 31, growing its market share to 17.7% at December 31 from 14.1% a year earlier.

'We're not concerned about regulation at all'

Given the nature of its business in Australia and the fast growth, interest.co.nz asked Mackrell whether Heartland has any concerns about potentially being hauled under another Australian regulatory umbrella.

"We are regulated by ASIC and the reverse mortgage product itself is a highly regulated product. There are a lot of requirements as a result of that and we work very closely with ASIC to make sure that both what we are doing is appropriate, but also I think we are leading the industry in terms of our approach and conduct. So we're not concerned about regulation at all and comfortable that any regulation that comes along that's reasonable is fine. We're not aware of anything [new] that might occur," Mackrell said.

Heartland, which has a 13.35% stake in peer-to-peer lender Harmoney, had done NZ$26 million of unsecured personal lending through Harmoney in Australia by June 30, and a bit over $100 million in NZ by June 30, with annual growth of 34%.

Heartland also plans a secondary listing on the ASX for its New Listed Parent Company. This would give access to equity capital from a much bigger sharemarket than the NZX.

Under Heartland’s banking registration the extent to which its loans (assets) in both New Zealand and Australia are secured to wholesale funders is limited to no more than 20% of total assets. Heartland’s currently at 18%, and the bank estimates it will exceed the 20% threshold within two years.

Additionally Heartland’s overseas (Australian) assets are not allowed to exceed 33% of its total assets, a threshold the bank believes it’ll exceed within four years at its current growth rate. Heartland currently has about 17% of total assets in Australia. Based on its more than 13% per annum growth in finance receivables over the three and a half years to March 31, without the restructure Heartland says it’d have to seek new and potentially "sub-optimal" sources of funding and/or restrict growth in Australia.

Mackrell said aside from wanting to be able to continue funding Australian reverse mortgage growth with secured funding, the 20% limit could also constrain Heartland in terms of other secured funding it might want to use in other parts of its business. Alternative funding options in Australia without the restructure would include unsecured funding and funding from Heartland's NZ deposit base.

"Our preference is to fund Australian assets with Australian dollars," said Mackrell.

As of June Heartland had total borrowings of $3.796 billion. Although deposits comprise $2.881 billion of this, Heartland funds its Australian reverse mortgage business through a loan from ASB’s parent Commonwealth Bank of Australia (CBA). As of June 30, A$562 million of the A$600 million CBA facility was drawn down.

The CBA facility is secured over the shares in Australian (Heartland) Seniors Finance Pty Limited and the assets of the Australian Seniors Finance Group. The CBA facility is due to mature on September 30 next year. Mackrell said the CBA funding won't be impacted by the restructure, and Heartland's "well advanced in ensuring that we've got adequate funding for growth into the future."

No change for depositors

"At the moment we fund that Australian business through Australian dollar funding not [by] utilising the New Zealand deposit base and there's no change to that. There's no change expected to the credit rating of the bank [BBB with a stable outlook from Fitch] as a result of the restructure. So I don't expect any change for the depositors," Mackrell said.

In terms of its annual financial results, Heartland posted an 11% increase in June year net profit after tax to $67.5 million. For the June 2019 year Heartland is forecasting an increase of between 11% and 14% to between $75 million and $77 million.

"The key drivers of that increase are an expected continuation of the growth trajectory that we've been on. We've delivered double digit growth in terms of profitability, in terms of receivables growth over the last four to five years now and everything points towards a continuation of that," Mackrell said. "So that's the primary driver. Continued momentum of what we've achieved."

"In New Zealand the motor [vehicle] business has continued to develop and grow well, so we'll continue our focus there. And our open for business platform, which has nearly doubled in this last year, we believe has got more momentum to take it forward," said Mackrell.

"ANZ are conducting a review of that business and haven't determined what they're going to do. But we remain interested and we've communicated that interest certainly in the last six months," said Mackrell.

"We've made it clear [to ANZ] that we're an interested buyer," he added, although acknowledging Heartland's declaration of interest didn't take the form of an actual offer.

Heartland shareholders will vote on the restructure proposal at their annual meeting in Auckland on September 19. Assuming they vote for the restructure, a court order will be sought to give effect to what's a Scheme of Arrangement between Heartland Bank Ltd and its shareholders under Part 15 of the Companies Act. The Reserve Bank has already provided its non-objection to the restructure.

Mackrell said Heartland has been working with the Reserve Bank to make sure the regulator is comfortable with the proposed restructure.

"The various regulations the RBNZ has in relation to governance will be maintained," Mackrell said. 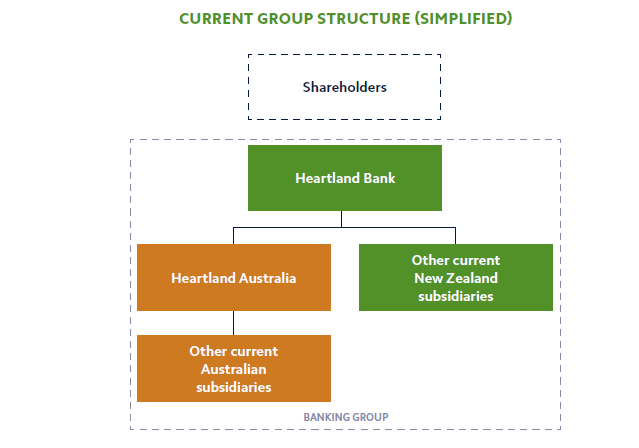 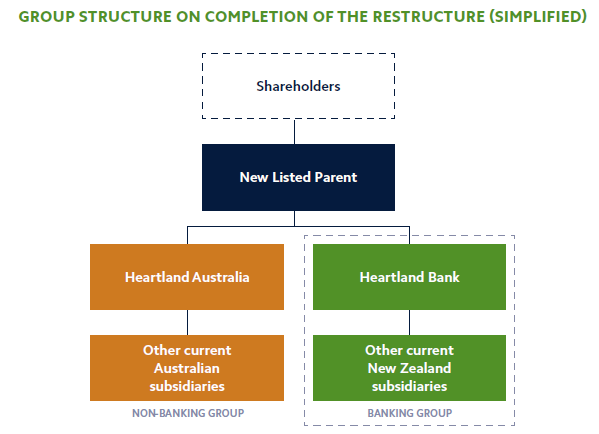 Go Heartland. Any home grown bank-type company is a big ask, but you guys (& gals) seem to have a working formula. Beware the coming recession (and it could be a beauty) but apart from that go in knowledge and courage. PS: Would love to see UDC NZ owned, so good luck with that.

Naive question. What is happening here ? I see a restructuring in the corporate structure happening . What about (de)regulation of reverse mortgages ? Don't understand much .

Is it all about separating Aus & NZ operations ; so that crisis on one side does not affect other ?

Any one can explain ; so that an average-joe can understand . ! :-)
Thanks

There is new legislation that gives APRA the power to regulate non-ADI institutions (it was passed on the 5th March). You can bet your bottom dollar once the first pensioner gets diddled by a reverse mortgage provider these powers will be exercised.
https://treasury.gov.au/consultation/c2017-021-new-apra-powers-to-addre…
https://www.legislation.gov.au/Details/C2018A00009