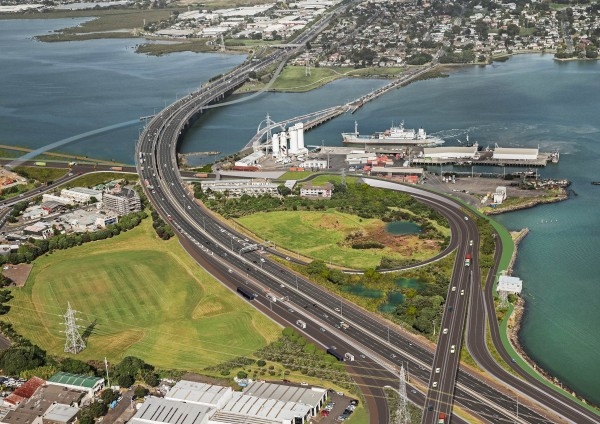 Auckland’s much maligned East-West Link (EWL) motorway project is back on the table according to the New Zealand Transport Agency (NZTA) which is currently re-evaluating it.

The EWL project was first unveiled in 2014 by the then National-led government which said it was a way to link SH20 at Onehunga to SH1 at Sylvia Park Mount Wellington. The planned four lane highway, which was earmarked as a priority roading project, was expected to cost up to $1.85 billion.

But after a change of government the new Labour-led administration announced in November 2017 that it was scrapping it. It had fallen down the pecking order of Auckland infrastructure projects and Transport Minister Phil Twyford instead redirected a lot of the government’s funding towards public transport.

However, in April last year Twyford did a u-turn on the controversial motorway project and announced that a new low cost version of the EWL would be looked at as part of the Auckland Transport Alignment Project (ATAP) and earmarked $800 million dollars for the new proposal.

So now almost a year later where are things at?

An NZTA spokesperson now says East-West Link is one of a number of projects currently under review by the agency as it looks to see whether it still aligns with its “new vison” for Auckland’s transport network.

“Once this work has been completed, work on the project may proceed as currently planned, be staged differently or we may explore lower cost options. The NZ Transport Agency Board met in December to consider next steps, however there is still more work to be done. We expect to be able to make announcements about decisions on this project in the coming months.”

The NZTA announced in January last year that it had been granted resource consent to proceed with the project. But it said that the consents were enabling and not obligatory. In other words the project can go ahead if and when government funding is secured.

A spokesperson for the Transport Minister Phil Twyford says the government is looking at a lower cost version of the EWL and is hoping to make an announcement on it in the next few months. But no further details are available at this stage.

“Our understanding is that the government is considering a half measure replacement, that will not solve the congestion challenges in the area,” Goldsmith says. “The East-West Link has fallen victim to the government’s blinkered pursuit of its expensive slow tram to the airport. The result will be more congestion in Auckland.”

But the grand proposal put forward by National before the last election wasn’t cheap. According to Infrastructure New Zealand the proposed EWL would have cost $327 million per kilometre, something its critics were keen to highlight. With some even describing it as the most expensive roading project in the world.

"It's an enormous amount of money on a very short link of dubious value that does a great deal of destruction to the natural environment," Greater Auckland author Patrick Reynolds said.

But despite the massive cost of the National Party proposal, Infrastructure New Zealand chief executive Stephen Selwood said it was an important project.

"We have another million people coming to Auckland by 2050. We really need to be getting on with providing transport infrastructure needed to support the city's growth."

Infrastructure New Zealand is a lobby group which represents both public and private sector organisations with the goal of facilitating the growth of New Zealand’s infrastructure and influencing central, regional and local government decision making.

A cut back version makes sense. The problem is that Neilson street is too congested. There are much cheaper fixes to that than building a 2 billion dollar motorway.

What are the alternatives ?

Widening Neilson street would not get rid of the multiple intersections and the Govt would have to expropriate many very expensive industrial properties , so $2 bn would be chump change for that as alternative to a new road

1) A lot of Neilson street is only one lane in each direction even though it has room for 2.
2) The SH20 end could easily be fixed by re-routing SH20 north traffic before Onehunga Mall intersection. This would remove a lot of traffic from this bottleneck
3) The other end where it meets with SH1 is hard to fix. SH1 is a carpark most of the day anyway, why spend $2 billion to get people onto that carpark quicker

no need to worry -- after an inquiry we will get a working group then more consultation and then ... well nothing really - a bit like the second harbour crossing !

Spend the $millions on working groups instead, do nothing about the congestion and leave us gridlocked .

We cannot continue to have builders spending 3 hours a day to get to and from building sites and only put in 5 hours work . The congestion is costing us big .

Auckland HAS to sort out the road congestion , and hopelessly slow and very expensive fares on buses and trains dont help .

I doubt spending $2 billion on one little road will make much difference to most builders unless they happen to be going in that direction. We have reached the limits of roads in Auckland, spending $20 billion wouldn't even fix it. We need to invest in higher capacity solutions like rail.

But we are building big new exurban low density expansions outside of Auckland and rail is therefore not the solution. The known result of low density sprawl growth (aka Auckland's current urban plan) is more congestion or more roads.

If the rest of Auckland was as dense as Hobsonville Pt then we'd get a lot more houses in the city than we currently have.

Disappointing to see the constant cost / km quoted as very high - which it will be on a short link where a big proportion of the total cost is consumed on the two interchanges at each end which should be costed separately.

These will be independent of the link distance.

It is a gross distortion to simply divide the overall cost by the distance.

This would be one of the most obvious road projects in Auckland. Currently if you want to cross from east to west at motorway speed, you have to drive to Manakau or the North Western. Add in the demands of the inland port and a second motorway option from the City to the Airport could it be more obvious.

PS did Labour cite a reason for canning this in the first place?

Jacinda is beholden to her coalition partners , and cannot fart without first getting permission from the Greens and NZF

EWL is not a motorway.

But would be way faster that Neilson St in its current choaked form.

I guess the reason is the $2 billion price tag.
There are also many 'obvious' public transport projects too.

Was it not that the internal analysis that was later released showed it as delivering poor return on investment vs other options? There was a fair amount of coverage at the time.

Go along the harbour edge ...4 kilometer strip? Around circumference of inlet 8 to 9 kilometres?. By 500 metres of reclaimable land in there.400 hectares gross area. Dredge the shallow mud flats to back fill.develope the land for mixed use harbourside industrial/commercial/ apartments..sell the Leasehold title only on the developed lots. That way the whole 4 billion($1000 m2?) of new land value and its income is retained to the crown(Chinese model ?).Use the income to pay for the road. Build over the road if one wants an additional 200000 sqm of elevated building platform .Make it a quality harbour by deepening it substantially(make it a 4 square kilometer fish nursery for replenishing manukau fish stocks- and. Very limited catch recreational fishing in the harbour)and a high quality public space along its 8 kilometer harbour/land boundary.probably could get 100's of large and small businesses and 20000 residents in there, with intelligent intensity.Rail, harbour and motorways already there.linkage to light rail if it eventuates. Public design competition for the whole basin inlet development.
Or are we not quite up to this scale of vision in New Zealand?

What you are proposing equates to environmental barbarianism. I would never support it.

Yes.i expected such a blinkered comment. An upgraded environmental amenity and re-stocking the manukau as a side kick, as opposed to mud flat slime backwater and mangove silt trapping.hmmm
.try again dear.

You ought to refrain from smoking synthetics while posting on interest. Just sayin...

You know that mangroves are a relatively recent arrival in NZ (since last ice age) and that they have spread explosively in the last 80 years to choke estuaries and waterways? They are not a good thing. https://www.nzgeo.com/stories/mangroves-allies-or-invaders/

Personally I think a network of submerged tunnel motorways up the Tamaki inlet and over to the Mangere inlet as well as between Waterview and Birkenhead and offshore along the coast from Whangaparoa to Beachlands would be a solution to the gridlock we currently face. Invisible and wouldn't cut into existing infrastructure or amenities

Great idea. Shame there are too many Taniwha and snails in there for it ever to be acceptable to large parts of the community

I think the EWL is a prime candidate for a private/toll toad. Its going to be expensive anyway so let the users fund it. I lived in Tauranga for several years and used the toll road there daily while most others were stuck in gridlock, the toll road was brilliant!

Auckland is doing more sprawl now than it ever has. Get used to this.

If you don't do it properly they will not fix the problem. They were silly to can the original but I have come to expect that of this government. If Genter had her way it would all be changed to cycle lanes with lots of cats eyes on it to ensure people stayed in their lane

In another article, James Shaw says we'll ALL have electric cars soon. Or something like that. Wont that bugger their diesel and petrol tax ??? Oh but wait. Enjoy the new TAX per km on your new electric car.... That by the way - Fact loose up to approx 25-30% of the storage energy when its cold. By power company stock.... for kind fee they'll be by to top you up + gst.

why not Metroport uses railway to deliver it's 40ft Containers ?

why not Metroport uses railway to deliver it's 40ft Containers ?

Why not Metroport uses railway to deliver it's 40ft Containers ?