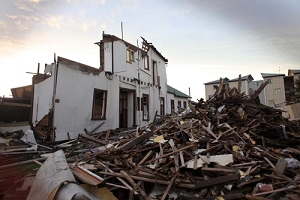 Insurers are refusing to share data with banks keen to get a clearer idea of how much risk they’re exposing themselves to when they take on mortgage customers.

The Insurance Council of New Zealand (ICNZ) has rejected the New Zealand Bankers’ Association’s (NZBA) renewed call to set up an independent information bureau or property registrar, which could help banks identify mortgage customers who are underinsured and thus pose a larger risk to them.

In its submission to Treasury’s review of the Earthquake Commission Act 1993, the NZBA says, "The bureau should allow for the non-competitive sharing of information about residential property insurance cover.

“Banks can engage in meaningful conversations with customers who are significantly underinsured using information from the bureau."

The NZBA's chief executive Kirk Hope told interest.co.nz, "Insurers used to send banks (on an annual basis) a copy of the insurance renewal notice when the property had a mortgage on it. This was stopped due to the administration cost and the fact that full replacement cover meant that the security was fully protected.

"As the bank holds a mortgage over the property, they hold an interest in ensuring that the security is adequately protected. This is not the case now under sum insured."

Yet the ICNZ’s chief executive Tim Grafton told interest.co.nz banks can set up systems to get this information from their customers themselves.

“The answer lies in their hands. They can just simply ask their customers ‘what is the insurance you’ve taken out on your house?’” says Grafton.

“They are saying they’ve got a problem that they can solve themselves, but they’ve come to us and said, ‘give us all your data and share it’.”

ICNZ unanimously rejected an NZBA proposal to establish such a database in 2013.

Insurers and bankers: Underinsurance would be exacerbated if EQC’s land cover went

However the insurers and bankers have found some common ground, as they lobby the Government on how it should change its role in providing natural disaster insurance for the public through the Earthquake Commission (EQC).

The ICNZ and NZBA have both rejected Treasury’s proposal to stop providing cover for land damage that has not caused damage to the house itself, and limiting land cover to situations where rebuilding is not practicable.

In other words they don’t want to see the Government transfer the risk of remediating properties’ building platforms (the eight metres of land surrounding the home) to the home owner.

This way, home owners would need to consider the cost of remediating the land and the sub structures of their properties when calculating their sum insured.

The NZBA argues it's unrealistic to expect home owners to know or understand the cost to reinstate their land and foundations in a wide range of potential natural disasters. They're thus likely to renew insurance at existing levels adopting an "it won't happen to me approach".

Grafton says this is a particularly serious problem for home owners in a place like Wellington, which has a high earthquake-risk and a number of houses on hillsides, which make these land assessments more complex.

However he says the NZBA’s database proposal isn’t the answer.

“It is not possible to know the land-foundation costs until after site-specific geotech and engineering assessments have been undertaken post-earthquake,” he says.

“Hence, having a database does not tell you whether a particular property is under-insured or not. The solution is not a database, but insurance cover.”

Grafton suggests it provides for the additional costs that would be incurred over and above what would be required to build the house today, say, if there was a fire.

“We propose that there would be a natural cap on this cover, which would be the value of the land based on the minimum area a council will permit a building to be built on – much like the current Act’s definition,” he says.

“You wouldn’t want to put more money into fixing the land and foundation, than the land is actually worth.”

He suggests getting rid of the eight metre boundary, and confining the area covered to the minimum area you can build on, as “the focus on the scheme is re-housing people, not ensuring the rose beds are all neatly packaged back together again”.

Grafton says this would see the EQC fork out the same amount, if not less, than it currently does for land cover.

The proposed land cover changes look particularly problematic for closely-spaced hillside properties. In Wellington, for example, many retaining walls are currently covered by EQC due to their proximity to a dwelling. If this EQC cover is removed, slope remediation will become a major headache for property owners. Particularly where ownership of boundary retaining walls is in question.

If the bankers arranging or extending a mortgage are doing the Know Your Client (KYC) analysis properly they will be able to assess whether a client is adequately insured and make the appropriate recommendation to increase or decrease the amount of cover.

What I fear we could see is bank staff recommending excessive amounts of insurance cover for clients which is unnecessary, another expense to the client and simply butt covering for the bank.