The RBNZ reflects on Canterbury 5-years after the quakes; warns the region's education and tourism sectors aren't showing signs of recovery

Insurance
The RBNZ reflects on Canterbury 5-years after the quakes; warns the region's education and tourism sectors aren't showing signs of recovery 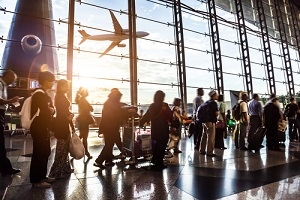 International students and tourists are flocking to New Zealand, but many of them are steering clear of Christchurch, warns the Reserve Bank (RBNZ).

Five years on from the February 22 earthquake, the RBNZ says Canterbury’s education and tourism sectors aren’t showing the resilience seen in other parts of the country’s economy.

The RBNZ has red flagged plunging student and visitor numbers to the region, amid a thriving construction sector, solid employment and buoyancy in the housing and retail markets.

In a report released today, ‘The Canterbury rebuild five years on from the Christchurch earthquake’ it says:

“In 2009, Canterbury University made up about 10% of nationwide international university student numbers. That proportion fell to about 7% after the earthquakes and has yet to recover.

The value of the international education sector increased to $2.85 billion in 2014, from $2.60 billion in 2012, making it New Zealand's fifth largest export earner. 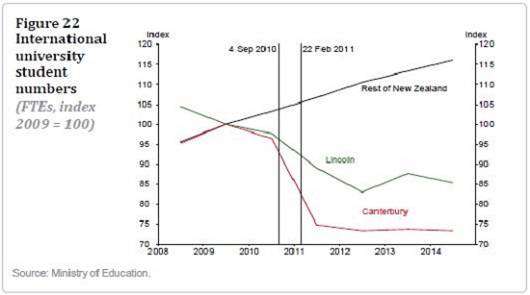 “In 2009, Canterbury University made up almost 12% of domestic university student numbers – that proportion fell to about 9% after the earthquakes and has remained around that level, a loss of about 3,000 students,” it says.

“On the other hand, domestic student numbers rose at Lincoln, and have remained relatively flat across the rest of New Zealand.

As for international student numbers in Canterbury primary and secondary schools, the RBNZ says numbers have always been low, but have fallen by more than 40% since the quakes and are yet to recover.

The RBNZ warns it could be a while before the tourism sector recovers.

This is despite visitor numbers to New Zealand increasing by around 20% between 2012 and 2015.

It says the quakes have halved the capacity of backpacker accommodation and destroyed more than half the hotel capacity.

What’s more, the RBNZ says, “Business contacts suggest that any such rebuild is unlikely to occur ahead of relevant ‘anchor’ projects such as the convention centre.

“The lack of available tourist accommodation, the destruction of tourist sites within Christchurch City, and risks associated with aftershocks led to a sharp decline in guest nights in the immediate aftermath of the earthquakes," the RBNZ says.

“International guest nights in Canterbury have yet to recover to pre-quake levels. Domestic guest nights were also negatively affected.” 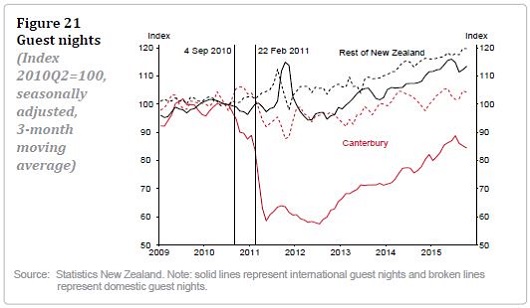 The RBNZ says it’s essential for all the uncertainty around the rebuild to be reduced.

“More than five years on from the first major earthquake, the rebuild is still many years from completion. The reconstruction of commercial property has yet to begin in earnest, many of the anchor projects in the CBD remain uncertain, and many insurance claims have yet to be settled,” it says.

It notes that of the 170,000 building insurance claims related to the quakes, 16% exceeded the Earthquake Commission’s (EQC) cap so have had to be covered by private insurers.

Insurers have paid out $26 billion, with the median insurer having paid out 80% of estimated final pay outs.

“There is a wide dispersion between insurers, with some having already completed nearly all payments and others materially less,” the RBNZ says.

It points out the rate of insurance settlement following the quakes has been slower on average than that for the major quakes in Japan and Chile that occurred at similar times.

“In part this delay may reflect the much greater number of claims and differences in contracts,” it says.

For example, the rate of insurance coverage in Canterbury was 69%, compared to 19% in Japan and 27% in Chile.

Yet it recognises the fact that after the quakes, most insurers changed their residential building policies, tightening terms and offering insurance on a sum insured rather than replacement basis.

“The overall cost of dwelling insurance is now more than double its 2010 level, in part due to the tripling of EQC premiums in 2012 and initially higher reinsurance costs, although reinsurance premiums have recently declined from their post-quake peaks,” it says. 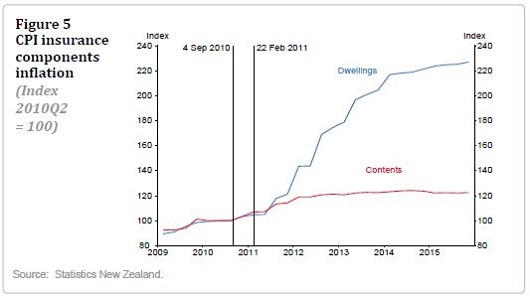 The RBNZ concludes, “When faced with uncertainty about the future, businesses are reluctant to invest and employ.

“Reducing uncertainty is important since other sectors will need to expand activity in the region to absorb the productive resources released by the construction sector as the insurance-funded rebuild winds down.”

It estimates the total amount spent on construction during the rebuild will hit $40 billion, comprised of slightly more than $16 billion each for residential and commercial construction and around $7 billion for infrastructure.

While infrastructure work has largely been completed, and the rebuild of residential properties is well underway, the bulk of commercial reconstruction is yet to start.

The Bank estimates that rebuild activity peaked at just below 2% of potential GDP in 2014, and that the rebuild will extend beyond 2020.

The RBNZ warns that without continued increased activity in Canterbury, “the labour market in the region could see a reversal of the improvement that has occurred in recent years, leading to reduced participation, higher unemployment and outward migration”.

Some of these issues may actually be a blessing longer term.
A NZ for NZers. Does every city need to be a multicultural melting pot?
The RBNZ should focus on its core activities - monetary policy for a healthy economy, & start meeting its constitutional goals - the PTA. Holding interest rates too high because of the "Chch Rebuild Stimulus" causing "inflation" was a RBNZ misjudgment which also negatively affected Chch.
Are banks still offering 3% mortgages for Chch homeowners?

Uncertainty kills progress and investment, the insurance industry and Government have added greatly to a inherent landscape of uncertainty. .In this case the Government was the only party that could have really assisted with moving the insurance industry. Their failed leadership is reflected in this area and all else that they have taken control over. They still want the control and in action have deferred on doing anything tangible.

Napier & Hastings were rebuilt completely within 20 months after the major 1931 Hawkes Bay earthquake. Everyone was able to lend a hand and rebuild without restriction.

Interesting. But it fails me why the RBNZ is pointing this out - I'd have seen it more as a TSY type analysis. Perhaps the RBNZ being at enough of an arms length is prepared to stick its head above the parapet - but TSY is not.