EQC levies may be affected by changes to disaster fund set to be announced after drawn-out review, Joyce says; Flags changes to reinsurance excess, operational detail 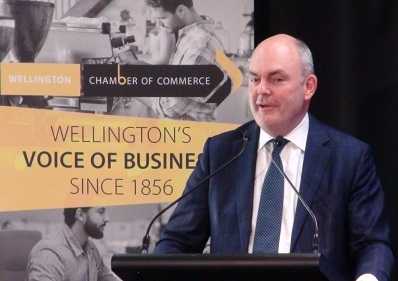 EQC levies might be affected by changes to the disaster fund being worked through by the Government, Finance Minister Steven Joyce says.

Efforts to restore the fund’s excess and arrangements with reinsurers – including the combination of what would be paid out by EQC and its reinsurers in future disaster situations – might “change a bit,” Joyce said.

A full announcement will be made in coming months on how the fund will be set up following the impact of the Christchurch and Kaikoura earthquakes in recent years.

The Government announced a raft of proposed changes to how the EQC fund operated in 2015. This dragged out longer than expected, with Treasury officials saying back in October last year that decisions were anticipated sometime in 2017.

Speaking to the Wellington Chamber of Commerce Thursday, Joyce said he and former Earthquake Recovery Minister Gerry Brownlee planned to announce decisions on the review in “the next two to three months.”

Joyce later told media at the event that the results would not mean starting again from scratch or replacing the fund with an entirely new structure.

“EQC being there as a collector of some of the risk, particularly around earthquakes, is actually a very successful model. It’s had its challenges but it’s a successful model,” Joyce said.

“We’ll be staying with that.”

Changes set to be made would be “around some of the operational detail which has caused some of the frustration in Christchurch in particular,” he said.

The Government was working to restore the fund’s excess – essentially what EQC was required to pay out before reinsurers backed the fund up. The combination of what was paid by EQC and its reinsurers might change a bit.

“We’ll have to look over what time frame that we’re doing that. But that might have an impact on levies and things, but we just need a bit of time to work that through,” Joyce said.

“There’s some [proposed] settings that will be both ‘unders and overs’ from EQC’s point of view.”

Does anybody know, or more exactly, is there the slightest possibility of ever finding out, just how much successive governments have siphoned out of this fund, paid into of course by us the taxpayers, and used that money instead , for purposes other than the natural disasters that it was set up to protect us from. Had that not been a regular practice over many years then the nasty, punitive & cynical role played out by EQC in the CHCH EQ travesty, would not have been necessary one would think.

Why don't you just look it up? Their financial accounts are public, and very easy to access. Start here. And here. (Of course you might find the answer to your leading question is 'little, if any'.)

Be interested to know what you find. It is best not to throw out conspiracy theories without first looking at the publically available record.

David, my apologies I was referring to EQC not ACC & I have edited the persecution theory that caused offence. There are some of us who have been around for a long time and have recall of many past governments and their practices. For instance I can recall a parliamentary debate on the radio, on this very topic during the Muldoon government when the Abbotsford disaster revealed the history of this practice quite precisely. And on further thought I recall an editorial or an article by the ODT to the same effect. But I do nevertheless appreciate your point and have to admit that I am at a total loss as to how one should obtain the ability to dive into the government books over the past umpteen decades. I apologise accordingly.

Spent some time on it - Couldn't find a thing

If you do find anything let us know - like to know

I love a good conspiracy as much as the next person but the numbers just don't add up in this case. EQC had accumulated $5.9bn prior to the Canty earthquakes and the entire fund was exhausted by those (multiple) events.

Don't know what the references to a conspiracy imply but a recent post by Empowered Christchurch records $525mill "released" by EQC to Treasury in Oct 2015. Call that a book, contra or whatever euphemism you prefer but it shows that the mechanism to draw funds out of EQC is long established and readily available. The point is this practice by governments has been around since Nordmeyer at least and if this hadn't been so, there would have been a heck of a lot more available funds in EQC in Sept 2010 when it all started which would have allowed the reasonably liberal approach by EQC after that EQ, to continue rather than the draconian policy adopted after the Feb 2011 EQ.

I think the money "released" by EQC back to Treasury was out of the provision for land claims. There have been a lot of games around the ILV and IVF claim settlements, starting from Brownlee authorising $600K payments to a few Fendalton homeowners, and working rapidly downwards from then. Land claims for vulnerability to liquefaction or flooding are based on "diminuation of value", rather than on the actual costs of remediating the land. And where homeowners have assigned land claims to their insurers, the insurers are now having a go at EQC to recover some of their costs.

Of course now EQC have spent many many millions of the EQC fund on :

1. establishing the new heads of land damage "Increased risk of liquefaction" (ILV) and "increased risk of flooding" (IFV) which allow EQC to in the main ignore the actual damage caused by land on which the building was insured by saying the land "was always like that" and which then leads to insurers to suggest they can repair a house by pretending it is suspended not on that land but in thin air (because EQC is responsible for the land).

2. unnecessary and extensive land investigations for ILV purposes then later mostly need to be re-done by insurers to obtain site specific results for the purposes of assessment of claims and construction, and flights over Christchurch pinging sonar of the ground using an unreliable but very expensive method to establish the change in flood levels, all that in the main need to be re-done by insurers;

3. deciding they could either repair land or maybe get away with a diminution in value payment instead;

4. seeing whether they can establish in the most complex manner possible (more expensive and difficult to challenge in court) an engineering methodology to determine whether the property has ILV and /or IFV

5. seeing whether it can establish int he most complex manner possible (most expensive and difficult to challenge in court) a valuation methodology to value any perceived loss due to ILV or IFV

6. working out ways to convince those with ILV and IFV that they should spend the diminution in value payment offered up on a holiday or a new car, and that is all that they are entitled to - i.e. EQC will not fix THEIR land.

After that massively expensive and no doubt fascinating exercise in poor project management and investment in science and technology, you will find most badly damaged properties in Christchurch remain badly damaged, but there are a lot of nice European cars down here.

My question is: what is the point of all that. Many waited six and a half years to get this payment after EQC made big initial promises and spent a lot of time and money saying "It's complicated..." For the sake of the average payment of around $15K, perhaps the effort and stress of expecting the land to be repaired or properly reimbursed under insurance so people can actually buy another section and move elsewhere and the time involved is....just not worth it.

Kept a lot of people in employment, but guessing it is false productivity over all, and many ChCh residents left with very poor prospects in terms of their future insurability, even if they have a new car.