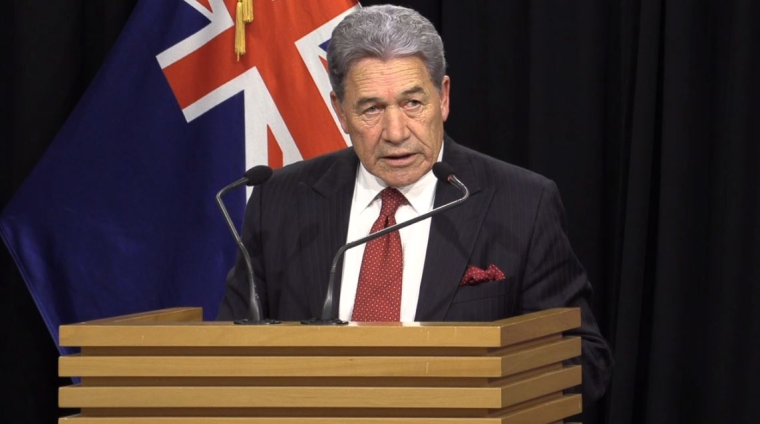 Foreign Affairs Minister Winston Peters says New Zealand is a “whole lot closer” to securing a free trade agreement with the United States further to his trip to Washington earlier this month.

Speaking at a post-Cabinet press conference as Acting Prime Minster, Peters wouldn’t provide details on exactly where talks got to, but said things were “very very positive”.

“They’re looking at New Zealand with new eyes and with a new sense of obligation, so I came away very encouraged,” Peters said.

Asked what had changed for the US to view New Zealand through this new lens, he said: “They share an understanding of the realities that we have to deal with out here in the Pacific, and the theatre which goes all the way to Hawaii, all the way to Japan…

“For the first time in a long time a number of countries are realising how we must all refresh and reset our views to secure, economically and socially, the security of our part of the world.”

Pressed on whether the “theatre” he mentioned referred to China’s growing influence in the region, Peters remained diplomatic.

“We’re talking about the theatre with our eyes wide open,” he responded.

He then referred to a speech he delivered to Australia’s Lowy Institute in March last year, in which he talked up New Zealand’s “Pacific reset” or renewed development focus in the Pacific.

He talked in his speech about how post-colonial Pacific leaders were increasingly comfortable “courting a range of external partners” which was “changing New Zealand’s relative influence” in the region.

“The Pacific overall has also become an increasingly contested strategic space, no longer neglected by Great Power ambition, and so Pacific Island leaders have more options. This is creating a degree of strategic anxiety,” Peters said.

“New Zealand – which is the Pacific’s second-largest donor, accounting for around a tenth of total development spending in the region – is not alone in grappling with the new realities.

“It is the same question Australia, the European Union, and the United States all pose to themselves. We need to better pool our energies and resources to maintain our relative influence.”

Speaking at the press conference on Monday, Peters went on to say: “I’m delighted to say that a whole lot of countries have seen what we’ve seen and are joining us in ensuring that our values, our belief in freedom of security in our part of the world, has defenders.”

During his time in the US, Peters met with Secretary of State Michael Pompeo, National Security Advisor John Bolton, National Intelligence Director Dan Coats, and Secretary of the Interior David Bernhardt.

He highlighted, in a speech delivered at the Centre for Strategic and International Studies in Washington, the economic and “strategic” benefits of a NZ-US free trade agreement, saying it would indicate to the Indo‑Pacific community “that the US is in the region to stay”.

In the same breath, Peters pointed out how New Zealand’s free trade agreement with China had seen trade between the countries grow, while trade with the US had slumped.

“That means that the US has lost half of its market share over a 28-year period, and gives you a sense of the significant scale of lost opportunities for US exporters and workers."

Strategically speaking, NZ does not need FTAs with the US, UK, Canada, and Aus.

The UK is the dad and the others are the four sons. All money flow among is still within this big family.

Can we afford the necessary tribute to the US MIC and if not would we be sanctioned?

I don't want a free trade deal with the USA. As we witness on a daily basis they are overbearing bullies who want everything their own way. God knows what they would demand from us in return and as things stand at the moment they have pretty much completely free access to our markets anyway. We have no bargaining power. I read somewhere, perhaps in Australia, that all the countries that have signed free trade deals with the USA have lost out as a result.
I would rather we focused our attention on wealthy more modest countries with whom we can have relationships with more mutual respect. How about Canada, Japan, Sweden, the rest of the Nordic countries, The EU. Leave the over bearing bullies to slug it out and keep well out of the way is my view.

Chris-M - Well said it seems to me free trade agreements with the US are stacked in their favor. The US unfortunately are Bullies characterized by Trump. Sure they saved our bacon in WW2 ultimately for their benefit but have caused suffering for millions since then through their conflicts, wars, sanctions and general meddling in others business. I pitty Iran trapped between a rock and the US !

A free trade deal with the USA will contain devil in the detail, but is worth pursuing. We can always walk away without signing if the details aren't to our satisfaction. A deal with the UK may well come first, and could be surprisingly quick if Brexit does finally happen.