Government gives itself more spending wriggle room sooner than expected, having met goal of reducing net debt to 20% of GDP

Government gives itself more spending wriggle room sooner than expected, having met goal of reducing net debt to 20% of GDP 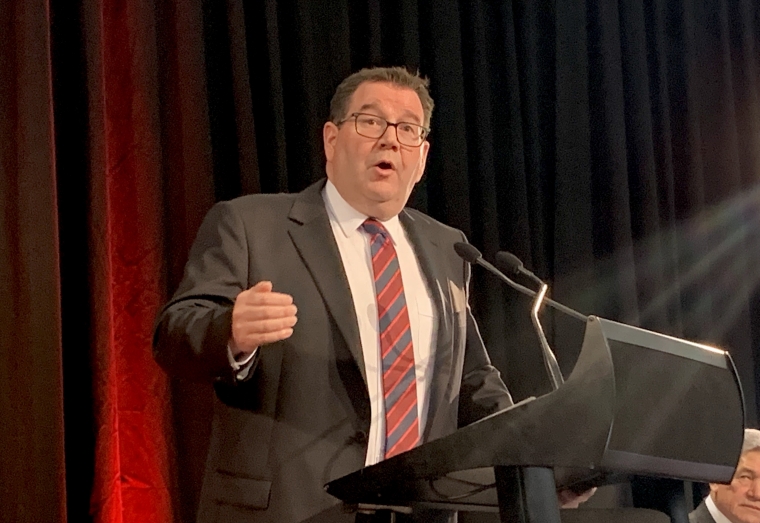 The Government has loosened its fiscal straightjacket now that it’s met its target to reduce net Crown debt to 20% of GDP within the first five years of it taking office.

However Finance Minister Grant Robertson says the Government is moving to that target range now.

His comments follow him on Saturday announcing the Government will spend “significantly” more to bring forward planned infrastructure projects.

Details around the spend will be revealed on December 11 when Robertson releases his Budget Policy Statement with Treasury’s Half Year Fiscal and Economic Update (HYEFU).

Robertson on Tuesday confirmed he didn’t consider Treasury’s latest forecasts around government debt to GDP when he decided on this infrastructure package.

Asked by interest.co.nz whether his goal was still to reduce net Crown debt to 20% of GDP by 2021/22, as per the projection the Labour Party made ahead of the 2017 election, Robertson said: “Our commitment was that within five years of taking office we’d have net debt at 20% or below.

“In our first two Budgets we’ve done that. We are moving to the range. You’ll see on the 11th of December exactly where that lands…

“We made this commitment around infrastructure spending separate to that. We made that commitment in advance of knowing the final numbers…

“We won’t be changing the fact that we’ll be careful fiscal managers, but what we’ve signalled is that there’s a lot of need in terms of our infrastructure deficit. Borrowing costs are low, the books are in reasonable shape, so now’s a good time to make that investment…

“The BRRs [Budget Responsibility Rules] were always about setting ourselves some boundaries, but we always said we’d adjust to the economic cycle.”

Quizzed on whether the Government was technically moving away from its BRRs, Robertson said: “I think we are at the level of semantics here."

The National Party has taken the opportunity to have a go at the Government for “throwing out” its commitment.

It’s calling for the government to “rein in wasteful spending”, while delivering tax cuts and investing more in roads.

National’s finance spokesperson, Paul Goldsmith, in August said net Crown debt at 20% of GDP was “about right”. Before the 2017 election the party campaigned on reducing debt to between 10% and 15% of GDP by 2025.

National hasn’t formally announced a debt target going in to the 2020 election.

The Reserve Bank, when it cut the Official Cash Rate (OCR) by 50 points in August, explicitly called for the Government to spend more to stimulate the economy.

It toned back its rhetoric when it reviewed the OCR in November, saying in its Monetary Policy Statement that it “noted that fiscal stimulus could be greater than assumed”.

Asked to elaborate on this comment, Governor Adrian Orr said he imagined the Government had heard the RBNZ’s calls for more fiscal stimulus, so it didn’t need to keep “shouting” about it.

I expect major housing and hospital commitments announced prior to Xmas. Could moving the Auckland Port be a bolter?

This coalation needs to drag something out of the bag to stay in power.

Caution to the wind, expect a spray of money everywhere with the usual lack of control, measures and metrics as this government doesn't like to be measured.

And then a bribe for Winston will probably be the cost of winning the next government.

Sadly all Auckland consumers will bear the economic and environmental cost of moving hundreds of thousands of containers to Auckland, and then returning the empties. Then they will have to be trucked right across the city to their destination, not from the centre out. Imagine how that North Western motorway and Spaghetti junction will cope with that.

This Government has achieved diddly squat !

All we have seen from them is utterly stupid ideas , and random stuff like banning oil and gas , and all-but banning property investment ( in the middle of a massive housing shortage)

Maybe they should announce a new SOE ............in the agri-business sector growing cannabis

Agree with most of that, except the double handling of freight.

There will be some cost associated with the distance, no doubt, but it's not as if couriers do last mile deliveries directly from the Port and the empties just get loaded straight back onto the boat.

They will struggle to actually spend it on account of the fact that near everything they touch turns to crap. Exhibit A - Auckland light rail.

I hope the projects they choose are ones that will actually benefit the country and be good value for money, as opposed to just spending for the sake of it. Like that time Phil built kiwibuild houses in Queenstown for which there is no demand and they now can't get rid of - mindless spend, just chasing numbers.

I think it was Wanaka.

Wherever it was even HNZ won't take them.

No, as I understand it, they sold on the open market - to non-kiwibuild qualified buyers.

No, HNZ didn't want them.

This is the story I was thinking of - first home buyers didn't want them and neither did HNZ. This was two weeks ago, haven't followed it since then. Resorting to selling on the open market - so all went according to plan, great success.

Everything has a market, it just depends on the price. If they have sold it will be interesting to see if the Taxpayer took a haircut.

Given the amount spent on kiwibuild and the derisory 238 houses actually built even if they had sold all houses at 2x market rates we would have still taken a haircut.

Hey looks like the old Labour election year lolly scramble, I'm sure some of the infrastructure projects will be worthy but the real issue for NZ is the fact that there are little to no spare resources available to take on new large projects the country is already maxxed out !

If the country is already maxed out, isn't that a good thing?

Not when the compensating factor will be price or even worse the debacle seen on Aucklands Southern Motorway where projects take far longer than initially expected. Then again this lot are so ideologically opposed to the roads tax payers who use roads want that won’t be an issue. When National gets in it needs to immediately start the big roading projects so the left can’t cancel them so easily

Remember when everyone scoffed at Stephen Joyce when he said Labour's budget plans had a 15.7bn hole in them.

And his definition of a hole was a deficit that had to be made up by borrowing or cutting back on promises.

Yet they've been running a hefty surplus.

Partly based on revaluing assets and not yet spending the pre announced items.

Well it's a good thing they've delivered on everything they campaigned on, or else people would be asking some serious questions.

yes delivered on Kiwibuild and slashing immigration just to name a couple of things they campaigned on ...when serious questions get asked about these issues they simply say we RESET or NZ needs the immigrants...I guess it will be Nationals problem next year to sort the roading infrastructure for the 50,000 new people arriving wanting to drive to work each day.

NZ needs migration to keep our sweatshops running. The government is fooling anyone with their stance that migration is fulfilling an economic need (shortages in sought-after skills). In reality immigrants do the work that kiwis are not willing to do at pathetic wages and in deplorable work conditions.
There needs to be a major push in modernizing our markets and improving economic competitiveness before we could bring our economy out of its low-skilled migration binge.

You'll find that is accounting trickery $2B in valuation of railway land and stopping all infrastructure projects gets you all of the surplus.
The loss in the surplus was $270M and you guessed it what that was....yep Kiwibuild absolute failure !

Add to that loading up the likes of Housing NZ with debt which is 100% owned by the government but technically not 'crown' debt also helps. And yes.. Housing NZ raises funds at a higher rate than the NZ Govt... so we pay for Robertson's accounting trickery

From memory the Coalition have hidden something like 3.7billion in off-the-books loans in SOEs - even though it costs more for them to borrow than it does for the govt - Coalition wasting our money so they can pretend they aren't borrowing as much.

Whats with Soymans croaky voice? Was hard to listen to him on RNZ this morning rallying against cannabis and donations law reform. PR need to sort that out prior to election (or they do not care as Luxton waiting in the wings)

Let's wait for the List of Projects, and the HYFU. Not many sleeps until either....then there will be an Actual Basis for the bloviation.

I dont think they will have any problem finding the money and controlling debt,there are more taxpayers and more new tax sources every year.I bought something on ebay france this morning and they added GST to it.