The latest data on fourth quarter 2019 economic growth suggests it is weakening, although ANZ says it may be finding a floor at a weak +2% rate

The latest data on fourth quarter 2019 economic growth suggests it is weakening, although ANZ says it may be finding a floor at a weak +2% rate 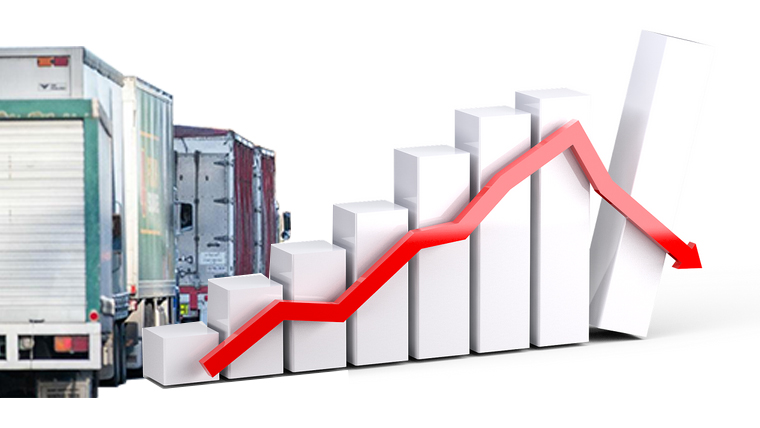 Economic activity is sagging in the productive sectors, while it is being held up by strong expansion in both the construction, and the financial & insurance (FIRE) sectors.

The release of the ANZ Truckometer monitoring supports the view that an atrophying of growth is underway.

That means in a year, the Light Traffic index is up only +1.1% while the Heavy Traffic Index is up only +2.2% in the year to December. These are both lower than the annual rises in November (+2.2% and +2.6% respectively).

Sharon Zollner, ANZ Chief Economist, said “Annual growth in light traffic is still lifting but that of heavy traffic has now plateaued. The Light Traffic Index is the better economic indicator of the two; it suggests annual GDP growth will bounce around the 2% mark into the middle of next year.”

“They agree that the slowdown in economic momentum may be finding a floor, consistent with our economic forecasts.

“But that said, the recent lift in annual growth in the two indexes is supportive of our view that annual GDP growth is set to bottom out around the current level of 2%

“The Light Traffic Index is suggesting modest positive GDP growth out-turns over the next six months.

“We now have complete data for the December quarter. A model using the Heavy Traffic Index both contemporaneous and lagged one quarter, and the Light Traffic Index lagged two quarters, suggests growth of 0.5% q/q.”

In the September quarter or 2019, economic activity as measured by GDP rose +2.7% year-on-year so these Truckometer metrics are signaling a slowing in economic growth.

The Truckometer series growth modeling is supported by Massey's GDPLive modeling which suggests growth slowed in Q4 to +2.3% pa. That separate analysis suggests the Taranaki region is now a drag on growth (following the Government's anti-oil and gas policy stances), and dragged lower by both public sector activity in the health and education sectors, and by the goods-producing sectors. Growth is currently being kept up by retail trade, construction, and the FIRE sectors, according to the GDPLive modeling 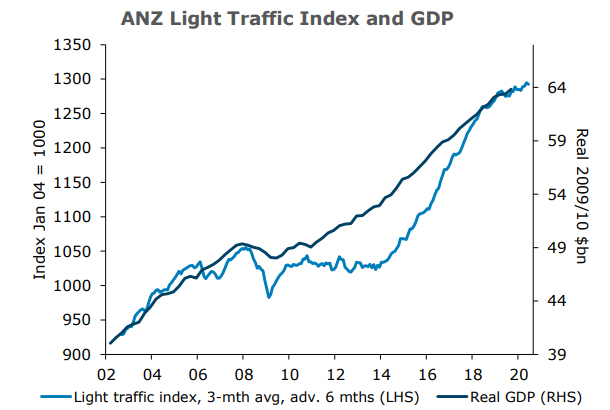 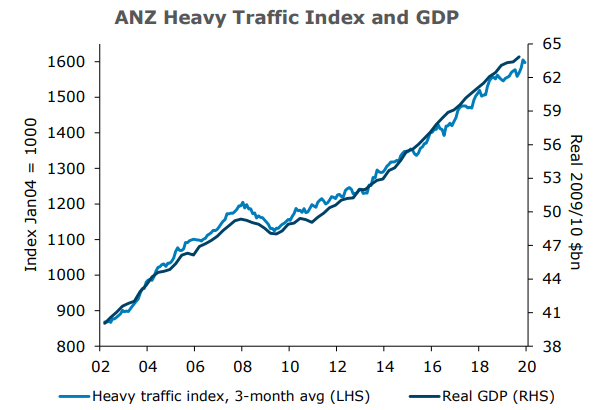 Just open the doors wide ...bring in another 100k this year.
Building houses for new arrivals is NZ's path to prosperity.
Master plan.

Indeed, leave it to the market to self sorted out the infrastructure and support for it, education, healthcare, jobs/productivity creations etc, NZ very ideal to become sustainable imported nation.

"Economic activity is sagging in the productive sectors, while it is being held up by strong expansion in both the construction, and the financial & insurance (FIRE) sectors."

Is it me or does this sentence highlight the exact problem with the NZ economy?

You mean an anti-business government intent on punishing productive sector voted in by economically insulated class of people who get their money from the govt? If so then yep.

yes. Go to any provincial town. Busy with new people. The busyness due to the building of houses and associated to cater for popn growth (mostly imported). They should be coming due to the trade and economic activity that prospers already, however they are only here to escape the mess in their homelands. There is in fact little of value going on here.

So we have it back to front. We think that just filling up the country will create the productive environment, when in fact that environment should be what attracts.

The value is created by keep on importing stuff, including peoples.. then circulated in local economic as a hot iron bar to handle, keep passing it on. NZ has firmed believe that it needs more foreign capital by selling all it's land based assets to 'overseas investment'..go check the past 15yrs stat of foreign 'overseas investment' imports.

Big economic shock is coming from rural sector. Rural canterbury trucking firms are laying off staff. That is pretty much unheard of. Other farming support industries are retrenching - which is bizarre given current high commodity prices - it's due to farm-hating govt's proposed nitrate regulations that will make most irrigated land worthless. They've collapsed confidence and farm expenditure has ceased as a result with severe consequences to rural NZ.

I'd agree with your statement if everyone was being held accountable for their actions e.g. councils, banks etc

Should farmers of today be punished for industry practices of decades back when the issues were unknown or considered irrelevant? Should NZ farmers be required to meet standards 10x harsher than other western farming areas? Farming tech have improved dramatically and accumulated residues from yesteryear are no longer being added to in anything like the same amounts. Slow adaption and improvement with balanced consideration of both environment and economics is the sensible way forward but the urban environment lobby are filled with religious indignation and in fine aristocratic fashion feel justified in ruining lives and communities in places that they never even deign to visit in pursuit of their arbitrary Arcadian preferences. Not the first time in NZ's history (they've already destroyed the West Coast's economy)

I have no sympathy what so ever, the farming lobby has dictated govt policy for years. These rivers are not private property for private wealth creation..they are owned by us all.

I have no sympathy what so ever, the millions of urban votes have dictated local govt policy for years. These beaches are not private property for urbanites to sh*t on..they are owned by us all.

Waymad you aren't allowed to point out the urbanites' hypocrisy, its against the virtue signalling narrative man

Both you and Rastus are right. There is plenty of blame to go round for the present state of our waterways. Most of the time, people respond badly when simply attacked, but respond much better when the problems are addressed in a collaborative manner.
I have no connection to farming. The few I know through our tramping group are lovely caring people, but deeply conservative by nature. very sadly, the suicide rate shows that many of them are struggling to deal with a rapidly changing world.

Now be careful on that.. the local claimed native will have a different assertion..on behalf of 'the people'

The problem with the farming lobby is that they're so reflexively anti-Labour and anti-Green that it's hard to take them seriously when they have a point. Fed Farmers are atrocious at their job; there's no need for, say, a Greens MP to ever engage with them productively, because they know FF will never, ever return the favour.

What's really crazy is that most farmers I've met are very environmentally conscious - they know they have to preserve and maintain their land or it will lose value and be less productive, and that being as clean as they economically can is beneficial to that but also to their reputations and image and produce's salability. That the Greens despise them and target them in endless diatribes and campaigns is pretty telling about the true religious, anti-business/misanthropic nature of Green supporters.

I'm another one that sees both Rastus and Waymad as right. You will also notice on here that a few of the most environmentally inclined also see the Green party as a waste of space. I see that the land is everything, we all survive on the produce from it. It means we need good people working it to produce. We also need to take care of it with a multi generational perspective. I think though that greed strikes everywhere and will work contrary to the long term interest, despite the narrative. I include farmers and maori in that comment.

Only Economy in NZ is Hosuing Economy and and related to it.

Agreed, NZ greatest assets is the land... that is for sale to any 'overseas investment' - which usually for example if it's from the Mainland China? - they pretend to invest to 3,5,7 yrs - imported all the workers (yip you guessed it; electrician, builders, chef/cook, cleaners, forklift driver, account, techs etc.) - then declared insolvency after passed the average NZ immigration requirements for PR application period, do you think all those imported workers+their family heading back home? - clue, please visit/live/interview at least 3yrs nationwide - plenty of them (ex. worker) roaming around baby sitting houses in South East AKL - water bottling plant?, Fisher & Paykel appliances?, dairy co? - NZ is very cheap laah :D

This the beginning of the "Big Slide"starting with the decline in farming revenue. People are waking up to the nightmare possibility that this year we may end up with a Labour/Green Government with no NZ Fist to keep them from total madness. As the election approaches it will become clear that NZ First may not reach the 5% threshold resulting in the slide gathering speed. The only hope will be that NZ First voters switch to National in sufficient numbers to enable a change of Government. One way or the other it can only be hoped that this government will be a one term Government which is not the first time that has happened,

Doubt it, I can sense it could be based on certain interest that the previous Nat co. provide to certain beneficiary to their policy. But honestly, if you observed the normal civil servants salary just to keep up with the living cost? - It took them 9yrs to protest about it; teachers, ECE, healthcare professionals, police force, students, Uni academics etc. - why would they vote for Nat co. again? - I for one voted for Nat co. twice in a hope that they will eradicate the 'Labour' inefficiency back in the past, but since the last election? - Never again, .. Nat co. is just the name, but really never plan long ahead for future betterment of NZ - just playing & manipulated the numbers, after all if we facing each other my right hand is your left hand isn't it, tilt the x-y axis graphs anyway we'd liked up-down, side way, inverted - in the end what matters is what really happened in the field.