Trade relationships are not a measure of popularity or acceptance of the other country's political leadership - and New Zealanders are among the most sceptical, even if we trade a lot

Trade relationships are not a measure of popularity or acceptance of the other country's political leadership - and New Zealanders are among the most sceptical, even if we trade a lot 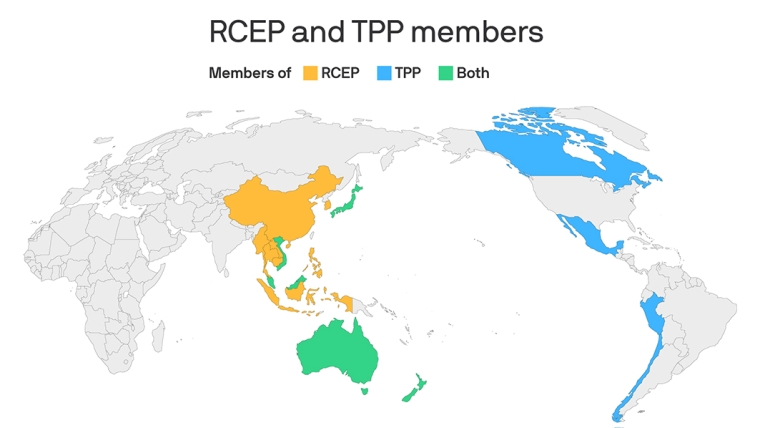 New Zealand has signed up to the Regional Comprehensive Economic Partnership (RCEP), a sort of TPP-lite.

A feature of the RCEP is that it is a result of China's effort to push back against US trade initiatives, that once included the TPP.

A modified version of the TPP is also now in force, the CPTPP, but it now includes many additional protections and provisions that would make it even harder for the US to rejoin.

China's parallel drive for influence in trade not only includes the RCEP, but also its Belt & Road Initiative.

The two big power actors in all this trade activity are pressing their advantages, and with a new US Administration about to take power in a few months, that rivalry may turn more serious again. Both sides will pressure smaller countries to declare whether they are "with them" or "against them". It will become increasingly hard for negotiators to thread a path between them. Up until now, New Zealand has done a stand-out job in this regard.

In the background is acceptance of the general population for these trade policy manoeuvres.

Gallup has recently (2019) polled all countries in the RCEP to assess how they view the leadership of the US and China. (And this was before the latest US election result.)

There are some strong views here, and mainly negative ones.

People in countries bordering China clearly don't like China, even when their country's leadership is China's pawn. Vietnam, Laos and Cambodia are clear examples.

People in countries led by dictators and strongmen rulers liked the Trump US. (Philippines, Cambodia, Myanmar.)

New Zealanders disliked both, but disliked the US more than China. The reverse was true for Australia, although not by much.

China has few friends in the popularity stakes, apart from Singapore and Myanmar. (Approval over 40% = 2.) The Trump USA had more. (Approval over 40% = 4.) But after the new Biden Administration takes office, that could grow quickly giving a new advantage. The China number is unlikely to rise.

Trade deals with large markets are a natural magnet for policymakers trying to win jump-start economic benefits. But even if people in their countries view the main protagonists very sceptically, this only works so long as those benefits materialise. Without them, the social tolerance for deals with either block may undermine the effort.

Funny that China's neighbours don't like China that much and US's so called friends in developed countries don't like the US much.

From the CCP:
RCEP proves that multilateralism is the right path for the world: Global Times editorial

China has few friends in the popularity stakes, apart from Singapore and Myanmar. (Approval over 40% = 2.) The Trump USA had more. (Approval over 40% = 4.) But after the new Biden Administration takes office, that could grow quickly giving a new advantage. The China number is unlikely to rise.
Who needs enemies with friends like this:

NSA has returned the favor by spying on the ministries of Finance & Foreign relations and defence industry.Link

NZ's political figures are lobbied, well-connected, and well-funded by big guys, who will make sure that they do not piss off China as the AUS did.

I also see a growing divide in NZ's population and companies in next decade in terms of those who connects to China and those who do not.

Agree on all points. Interesting how people who are vocal detractors of China are also enthusiastic consumers of their products - the height of hypocrisy

Hopefully under Biden, he may look at joining the CPTPP, it would be good if this happened.