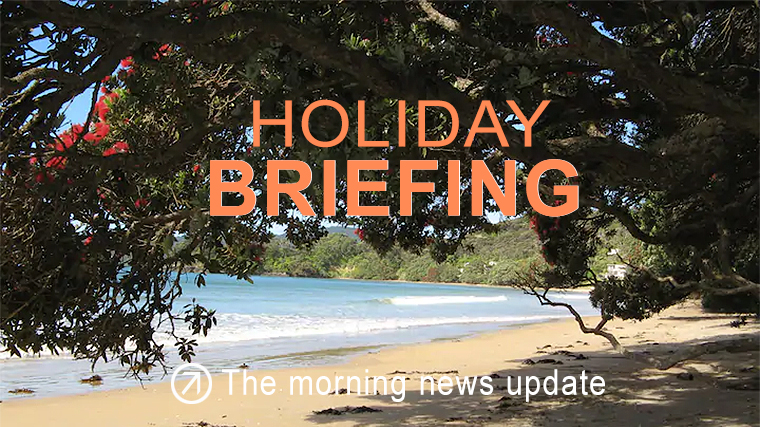 Here's our summary of key economic events over the New Year holiday break that affect New Zealand, with news the pandemic resurgence is making a mess of 2021 optimism.

But first, in the US, the number of new claims for jobless benefits fell last week to 841,000. That leaves 5.3 mln people on these benefits. The expected end won't happen now as Congress has approved an extension, including a special support payment. (At the end of 2019, there were 1.8 mln people on these support programs.)

The price of crude oil has now been stable for a few weeks and drillers are finding that at these [low] levels they can be profitable, so more wells are being brought back online. Last week's 351 is 100 more than the bottom in July, and 24 consecutive weeks of [small] gains.

In a parting shot, the Trump Administration is selling drilling leases in the Arctic National Wildlife Refuge in Alaska. Bids close on Friday, January 8 (NZT). But in a sign of the times, it looks like no oil driller will bid. Just another policy failure.

China's factory PMI slipped marginally at the end of 2020 to record a modest expansion. Their services PMI however is expanding is a healthy way, and the final 2020 expansion is similar to the November data. These are official data; the unofficial Caixin metrics have been giving stronger results recently and this version won't be released until later tomorrow.

This Chinese expansion is the engine of world growth at present, but it does come with some unique distortions. There are many, including a growing north-south divide within the country.

But the most important is the sharp distortion in food prices. It is notable that prices for corn, wheat, palm oil and rice are all very high and rising. This trend exposes China's food deficit, and the implications for affordable food for the rest of the world are serious. The next dairy auction is later this week and New Zealand will no doubt benefit from this trend, not only for dairy but red meats as well. But the insatiable Chinese appetite for buying up food on the world stage will have unfortunate consequences in 2021. Basically China can't feed itself, and social harmony at home means the rest of the world's problems will be ignored as it moves to ensure it has enough food.

Metals prices are also being distorted on Chinese demand - and its politics. While it says it is getting serious about trying to cut its reliance on Australia’s iron ore and Australian coal, prices just keep on rising. Certainly, Australia is not suffering at this time, despite their nervousness. But it is not only Australian metals, copper and other key minerals are also at very high levels too.

And China is moving aggressively to ensure it has 'military-first' policies in place should it feel that its rivals are getting the upper-hand. For the first time, “disruption” and protection of “development interests” have been added to the legislation as grounds for the mobilisation and deployment of troops and reserve forces.

The resurgence of the pandemic is getting economists reworking their 2021 forecasts already, all with eyes to downgrades. That is true for Australia as well. But before that pullback kicks in, we will no doubt hear news later today that the Aussie housing market is rising sharply, with stellar gains in Victoria, NSW and Queensland all at the same time.

Property risks are also getting attention in China as their central bank regulator tells banks to cap their exposure to the sector.

The latest global compilation of COVID-19 data is here. The global tally just keeps on rising, now at 84,839,000 and up +2.6 mln since Christmas Eve. We are heading for 100 mln before the end of January. Many countries are getting a surge from New Year's celebrations where social distancing was abandoned. It is still very grim in Russia, the UK, South Africa and Indonesia. It does seem to be easing in Europe, although not in the UK or Sweden. Global deaths reported now exceed 1,840,000 and surging +43,000 as death rates rise everywhere. The UK variant strain has now spread worldwide, meaning this virus is much more infectious.

In Australia, their Sydney-based community resurgence seems to be stretching out further with yet more hotspots. That takes their all-time cases reported to 28,483, and +102 more cases since New Year's Eve. Now 273 of these cases are 'active' (+69). Reported deaths are unchanged at 909.

The prospect of a Trans-Tasman travel bubble in early 2021 has now slipped away. Australia is now nowhere near "28 consecutive days of community transfer COVID-free" to allow a travel bubble without any isolation.

Oil prices are marginally firmer today at US$48.50/bbl in the US, while the international price is now just under at US$52/bbl.

And the Kiwi dollar has fallen back slightly to start the year, now at 71.8 USc. Against the Australian dollar we have dropped a lot and we are now under 93 AUc. Against the euro we are firmer by +½c at 59.2 euro cents. The net effect is that our TWI-5 is marginally lower at 73.1.

The bitcoin price has started the year at new all-time high levels, and although it has drifted off its absolute highs in the past few hours, it is now at US$32,736 or +16% above the high it finished at the end of 2020. The background for the recent jump is here. The bitcoin rate is charted in the exchange rate set below.

Aye the Australian bubble burst before it formed. Besides 28 days without community transmission? Is that sufficient? Recall NZ went a 100 days as such and then suddenly it was in and out and about in Auckland. Australia has far greater border activity to control, and like rabbits under a fence, that’s where the bug slips through.

Are the pacific Islands covid free yet, certainly the cooks are keen for a bubble

Ha. Trans Tasman bubble gone. But we will continue to hear the witless going on about opening the border - Stephen Joyce was one.
This covid thing is only just coming into it's stride. There is a long way to go yet.
New Zealand has been lucky - so far.

Even though some of the public are screaming for them as their right!

Did anyone notice the FX bug that had the NZD at 66c? Funny thing is, many crypto exchanges were caught unaware and had their prices adjusted. At least two (kiwi-coin and bit prime) fell foul to it and had BTC 8% above the market price. Good for sellers.

Did you sell at the inflated price and buy again through an exchange with the correct price? That would have been savvy :)

"Stuck in NZD" Touché. But wait a minute. You want to diversify out of a fiat currency devaluing against every investable asset class in the double digits per year all the while being issued at near zero interest?? Explain to the viewers why you would do such a thing?

Google had it at 66c this morning, seems to be fixed now. Chart showed that rate since the 1st - a Y2.02K bug?

This Chinese expansion is the engine of world growth at present, but it does come with some unique distortions.
Despise the man, Xi Jinping, and what he represents, but, dammit, listen to him!

Some numbers from Richard Duncan. Housing bubble anyone?

During the first nine months of 2020, Total Credit in the US expanded by $6.4 trillion. The previous full year record for Credit Growth was $5 trillion in 2007.

Total Credit now amounts to $82 Trillion. It has increased 82 times in just 54 years.

Total Credit grew more during the second quarter of 2020 than during all of 2019.

Corporate Debt increased more during the first quarter of 2020 ($660 billion) than its average annual increase over the previous three years ($580 billion).

Household Sector Net Worth climbed by $5.2 Trillion during the first nine months of 2020, despite the pandemic.

Mate tells me you can this house in The States for 800k, he thinks the USA is in a crazy housing bubble

Watched a couple of do-up US housing shows recently and the price for some real crap houses in unremarkable locations seemed similar to here. Probably below Auckland levels but not by that much. There prob some good prices where demand is low but even then I think they going up.

Israel is worth keeping an eye on, they have already vaccinated over 12% of the population with a 2% daily rate with the first shot (Edit to add: Because Israel has a young population this actually means 22% of those who will get the vaccine already have it.) We are going to get our first look into the dynamics of vaccination in relation to controlling Coronavirus.

Sadly others (US, UK, EU) still look to be struggling to get their efforts underway. The US and UK have vaccines but can't distribute or administer them rapidly. The EU mucked up their ordering so they have a gross shortage of vaccine available. Very sad as these delays are costing lives and continue to undermine peoples views of Government and state institutions within those countries. Elections in France and Germany soon...

Even if it’s only 60% administered or effective it will probably create a herd immunity effect.

Hopefully, we should start to see deaths trend downwards in about two weeks (when people get their 21 day follow-up shot, assuming vaccine is available.) It's also useful for governments with underperforming vaccination programs as they now have a model to structure and scale their programs on if they also need to roll out a vaccination program more rapidly.

That includes us by the way, we should be taking note for when our turn comes.

It was always a pipe dream. And like the Cook Island travel bubble, a useful distraction to trot out whenever the housing questions became too tough.

Yup. Of course we aren't hearing much about that at the moment as everyone who is homeless tots off to their beach house over summer, or so you would think.

Soil moisture could be updated. There should be a blue area just east of Whakatane. 200+mm in 24 hrs.

Sure was a dump of rain, either too localized or too early to show. Am watching next front for NI due fri/sat

What’s everyone’s thoughts on this - once the vaccination is common this year, in 2022 if you’ve refused a vaccination and get sick from Covid, why should the government fund your treatment?