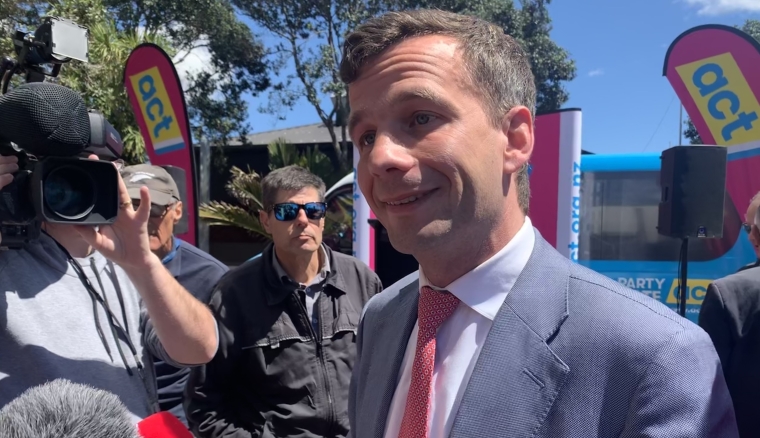 ACT wants to give more people the opportunity to come to New Zealand than is allowed for by existing managed isolation rules, to get “our way of life back”.

Guests and staff would need to be fully vaccinated and do saliva tests every two days. Travellers would also need to be from low-risk countries, and hotels could only take new travellers across three-day periods, before being “sealed” for two weeks. This would make it easier to keep tabs on people in the event of an outbreak.

ACT said hotels would lose their licences if they broke the rules.

The Government has been selective about which hotels it has used for managed isolation and quarantine, citing design features, as well as access to staff, airports, exercise areas, and hospitals.

The Government in May warned businesses they should stop relying on low-skilled migrants, as it had its sights set on “high-value international investment”.

However, last month it announced it is temporarily doubling the duration of the Essential Skills visa to two years for migrants with jobs that pay less than the median wage.

I have seen many Government licensing schemes fail. I do not see why this would be any different.

The bigger question is why is ACT pushing for more regulation? Surely the free market driven by greed would be ACT's ideal solution.

All this so we could bring in more low-skilled workers to feed into our low-value sectors; yet not a peep from Seymour about the looming shutdown of NZ's only oil refinery.

We are doomed between a virtue-signaling leftist government and a "business-friendly" right that only wants to restack the house of cards in the name of economic growth.

I just cannot believe how politicians, sitting in the driving seats for NZ's future development, are soooo disconnected to NZ's reality!!

Immigration in New Zealand has traditionally been more about suppressing the cost of Labour than facilitating economic development. Why else would "Sex work" and "Café manager" have ever made the skills list? Even now it's not science or technology companies pleading for workers, it's catering and parcel delivery companies.

We traded our jobs for debt, that's what free trade was about. China got the jobs, Russia got the weapons, and we got the debt.

Spot in Xingmowang….. demand for dairy and meat likely to fall over the next few years…. We cannot keep chopping down rainforests to graze cattle then chop even more down to plant soy to feed the cattle destroying vital ecosystems in the process. Read an article this morning discussing how US hedge funds and corporates are buying up single family homes and apartments that require considerable upgrades at considerable cost in order to meet government emissions targets. Many Traditional property investors and home owners cannot afford to make these upgrades. Blackstone, Blackrock are 2 examples. Here many property investors grumbled about the cost of putting in insulation and a heatpump. Imagine if we were told that solar had to replace our current electricity system in order to meet emissions targets….. https://youtu.be/0BVEWdyls7Y

The second one is worth watching too https://youtu.be/qkaRqOlQli4

prolly one of your more succinct posts - hard not to agree with it but I think you misinterpret - NZ's future development reality requires on us to confront it and not re-write it. I look forward to the day when Xi turns it over to an AI.

Read this https://en.wikipedia.org/wiki/Information_technology_industry_in_New_Ze… or this https://nztech.org.nz/wp-content/uploads/sites/8/2020/07/Tech-Sector-Ke… and inform yourself before indulging into this kind of generalizations.

Seymour would sell glasses to his blind grandmother if it meant he got 10 seconds of media spotlight.

Totally bonkers! There's no way private moteliers would be able to keep covid out

Exactly! There's also the divergence of interest: hoteliers & moteliers are there to make money (and good on them). But they would be more interested in promoting better stocked mini bars in the rooms than protecting public health. And let our memories not be so short to forget all the reasons why we ended up having to get the military to run these facilities. Not the best analogy but privatisation of MIQ would be as fraught as privatisation of our prison system has been.

ACT cant be taken seriously as a party if this is what they are focusing on....a koru club for miq...ffs

We are just being played as a people. The agenda is set by the banks, for the banks. Time for some focus back on BusinessNZ and what vision they have for the citizenry. They seem to be pushing an agenda via NZME and MSM.Its a future where the banks business grows but our share of the pie shrinks.

And the same for National...focussing on a two million dollar drug rehab spend..but hey lets not mention the $8B we have borrowed this mth to houses ourselves, our high cost of living and future challenges.

We are too trusting of our institutions and civic leaders.

Their pro high immigration policy is why I won't be voting for ACT, and why I tell anyone that says they are thinking of voting ACT to go and read their policies.

Seymour gets a lot of things right, but not this.

Also, I can't wrap my head around some of his 'pro-business' ideas such as unregulated investments by foreign interests in real estate, assets of national interest and natural monopolies in NZ.

And as well as turning the immigration tap back on-to help keep incomes down-Seymour wants what every Right wing party wants-big tax cuts. of course, somehow this will not lead to poorer services through government being made more efficient. Yea right!
This government has failed to deliver many of its policies, but must thank its lucky stars that ACT is feasting so well on the carcass of National. As ACT rises, so National falls leaving the left wing vote largely unscathed. If Seymour proposed merging ACT with National as long as he became leader, that would be a different story.

MIQ is a disgrace. Citizens are being prevented from returning home, unless they are an ISIS terrorist, of course. Re the case of the ISIS terrorist Suhayra Aden, who is being repatriated by a smiley face PM after more international brownie points.

From Granny Herald today: Ardern said New Zealand had an international responsibility to look after its citizens.

"New Zealand has not taken this step lightly. We have taken into account our international responsibilities.”

The woman lived in Australia and the kids have a Swedish father!

Thousands of New Zealand citizens are stuck overseas after study finished, work ended, etc and cannot get home because of the MIQ shambles. But this ratbag gets preferential treatment. Disgusting.

I agree, It's absolutely disgusting. The government talks all this righteous stuff but abandoned its own citizens. I'm in the same boat, I have been wanting to return to look after my aging Mother and settle in to NZ life again with family.
MIQ is a lie, it's virtually impossible to get a spot. The majority of other country's prioritize the citizens coming back but not NZ. If the can go against the law of NZ citizen being able to get home, what else is next convenient law they will break?

You might be interested to know that the childrens entertainment group "the Wiggles" were granted border excemptions on December 24th under the "other critical worker" category.

LOL. David Seymour has mis-read this one. He is way off the mark.

Yeah, nah, she’ll be right…… what a ridiculous and dangerous idea!

Better to keep your mouth shut and have most people think you are a moron than to open your mouth and remove all doubt......David should have kept it zipped on this one.

Some people are more deserving of help than others! Some people not only don't deserve help - they should actively be avoided.

This looks like a classic ACT policy, eg Charter schools, of getting into the taxpayers back pockets.

I missed the bit where he was asked or explained why this would be a good idea.

You can be assured if the government had a problem managing jails through private entities like Serco, I'll bet jailbreaks, escapees and police chases will be a daily entertainment item on the evening news.

That's because you'd expect Serco to be well versed in security measures. Private hotel owners with experience in quarantine , health , security , and political / mental health measures , not so much . This is a health / security/ border control issue , not an accommodation one .

Hmm, isn't this the guy that wanted us to mirror what Taiwan was doing? So how did that work out?

David Seymour would likely make better political mileage commenting on the repatriation of people who joined terrorist organisations to New Zealand than Covid-19.

When you run a small political party you have the benefit of not wading into a quagmire like isolation hotels. Pick your battles.

David is just a puppet for Business NZ and the National party...

Only when the housing market tanks will New Zealand realise the path these idiots have lead us down.