Opinion: Why Phil Goff and those wanting rate hikes are wrong

By Roger J Kerr Sideways for swap rates The intensity and heat in the wholesale NZ interest rate market continues to reduce as the high expectations (certainly not ours!) of only a few weeks ago that the RBNZ would be following the RBA to higher official rates early in the New Year is completely re-assessed. A dose of reality in the domestic economy of rising unemployment, static incomes, debt arrears/defaults and job insecurity has finally persuaded the "tighten monetary policy" brigade that their reading of the economy was way off beam.

A combination of RBNZ statements and weaker economic data has pushed the one to three year swap rates down 30 to 40 basis points from their highs of a month ago. I could see another 20 to 30 points coming off from here over coming weeks, but not much more than that. Overall, the outlook for short-term swap rates from here is the same as OCR/90-day interest rates "“ across the page for a good few months yet. The moneymarkets and banks participating in the short-term interest rate markets do not like this general stability in rate movements, it reduces trading and positioning opportunities. Corporate and mortgage borrowers should be very happy with the stability of the base interest rates, even if lending spreads and margins are still rising due to the new funding ratio rules being imposed on the banks by the RBNZ. "¦ banks recouping profitability from bad debt write-downs Fixed rate mortgage lending rates continue to increase, despite base swap rates moving down over recent weeks. Average two year home mortgage lending rates are now 7.25% (Kiwibank and some other smaller lenders at 6.90%), some 2.90% above the current two-year swap rates at 4.35%. The 290 basis point margin is the widest spread form many a day (see chart) and reflects the increase in the banks' combined costs of wholesale and retail money for that term. We now have both the RBNZ "core funding ratio" on the banks and the upward slope of the yield curve driving more and more mortgage borrowers to floating and 6 month interest rate profiles. What this all means is that Mr Bollard will have more responsiveness to interest rate changes if and when he needs to tighten monetary policy later on. The RBNZ are in a much better place today to control the economy and inflation than at anytime over recent years. That's great, however inflation and inflation risks in NZ in 2010 are very subdued in my book, thus the likelihood of sudden or unexpected monetary policy changes are remote. Capacity utilisation in our manufacturing and processing plants is down, so no real price pressures from this source. 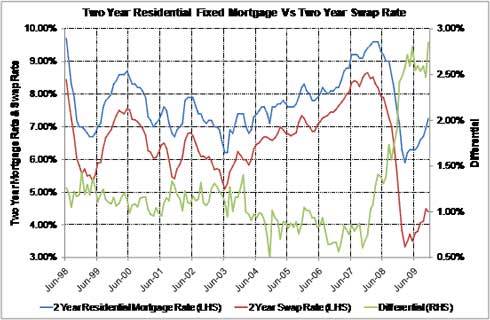 "¦.only questions, no solutions from the Opposition Labour Party A lightening bolt of enlightenment swamped the interest rate markets last week with the revelation that the Opposition Labour Party would reverse 20 years of monetary policy management consensus and fundamentally change the framework. Unfortunately they have no idea as to what changes they would make! - very useful indeed. Over recent years several reports and official enquiries into the management of monetary policy have come up with blanks in terms of recommendations to change. At APRM, our constant message to the RBNZ over several years as to changes required to reduce the collateral damage of monetary policy on the wide economy, is just to tweak the RBNZ Policy Target Agreement in two areas:-

Interest rate and exchange rate volatility would have been a lot less in NZ over the last 10 years if these exclusions and powers had been in place. The Labour Party, in formulating their policy changes, may want to go and read some of the corporate and non-bank submissions to the 2007 Parliamentary Finance and Expenditure Select Committee enquiry into the monetary policy framework. ____________ * Roger J Kerr runs Asia Pacific Risk Management. He specialises in fixed interest securities and is a commentator on economics and markets. More commentary and useful information on fixed interest investing can be found at rogeradvice.com