Top 10 links: Banks 'stick out like dogs bollocks' to be 'sold to buggery'; Bond buy back 'Shock and Awe'; Sir Allen's 'outside wives'

Top 10 links: Banks 'stick out like dogs bollocks' to be 'sold to buggery'; Bond buy back 'Shock and Awe'; Sir Allen's 'outside wives'

Here's my top 10 links from around the Internet in the last day or so. I welcome your favourite links below. 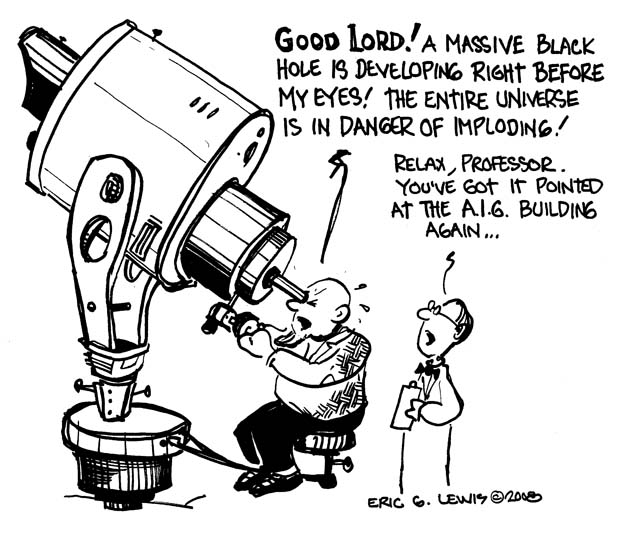 Banks fear losing shorts Australian investors and bankers are casting a nervous eye over at the Australian Securities and Investment Commission (ASIC), which is expected to announce in the next day or two whether to extend its ban on short selling stocks from its current expiration on Friday. The Sydney Morning Herald's chief political correspondent Phillip Coorey reckons a bunch of hedge fund raiders are ready to pounce on the Australian banking stocks. Yikes. Here is the unnamed quote to back it up. Those squeamish about coarse Australian language look away now...

"The Aussie banks stick out like dogs' bollocks as a profit opportunity on short selling because their market capitalisation has barely been affected by this global crisis. "Take off the short selling [ban] and [fund managers] are queuing up to lend [the hedge funds] scrip to short sell the buggery out of the banks and make their margin out of lending the scrip. "This is going to happen the day they take the short selling restrictions off. The hedge funds have already lined up all the scrip they need."

The thing about guarantees... Government guarantees for banks and finance companies are ugly things when looked at closely. We're having to do that now that Mascot Finance has gone into receivership. Not PC has some pithy thoughts here, citing the masterful Sage of Omaha. Hattip to Mark Hubbard on our site. Here's a taste.

Turns out Mascot stopped taking deposits in September. Turns out Treasury okayed its inclusion in the Government's Guarantee Scheme in October. Turns out Treasury still reckons that "based on the indications at the time, there was no reason to decline Mascot Finance's application." Which means this won't be the only "investment" you never made that you're going to have to pay for.

The US economy is buggered That's the only word you can use for it and I'm feeling in that sort of mood after our Australian comments above. US manufacturing contracted for the 13th month in a row in February. More on the debacle that is thumping US stocks and the global economy lower here on Gloomberg. US stocks in freefall, meltdown and other very bad words David Gaffen at WSJ's Marketbeat blog has a good summary of the fear, loathing and panic that went down on Wall St overnight. He says frustration and anger at the lack of a solution to the financial implosion are behind the selling. Here's what he thinks of Obama's decision to bail out AIG again.

The Obama Administration continues to imitate Michael Caine at the end of the Italian Job, assuring everyone that he's got a great idea, vainly trying to access a fortune that's only in reach if he commits to propelling himself "” and his mates "” off a cliff.

I like this quote too from Christopher Whalen from Institutional Risk Analytics in Gaffen's piece, essentially saying fear of a credit rating downgrade for AIG is paralysing government. Get over it, he says. 'We can handle bankruptcy.'

You can deal with these problems because we're not surprised anymore. They're hungering for an adult to walk into a room and put AIG into receivership.

The L shaped recession and stagflation Nouriel Roubini, the professor from the New York University who predicted the Credit Crunch, writes at RGE Monitor with more depth and clarity about the risks of an L-shaped recession and years of 'stag deflation', pointing out that things are more awful in Europe and Asia than in the United States. Here's a taste of the good doctor's gloom on the economic problems. It's dense but scary.

The scale and speed of synchronized global economic contraction is really unprecedented (at least since the Great Depression) with a free fall of GDP, income, consumption, industrial production, employment, exports, imports, residential investment and, more ominously, capex spending around the world. And now many emerging market economies "“ as argued here for a while- are on the verge of a fully fledged financial crisis starting with Emerging Europe.

And this on the financial problems.

In the meanwhile the massacre in financial markets and among financial firms is continuing. The debate on "bank nationalization" is borderline surreal: with the US government having already committed "“ between guarantees, investment, recapitalization, liquidity provision - about US$9 trillion of government financial resources to the financial system (and having already spent US$2 trillion of this staggering US$9 trillion figure). Thus, the US financial system is de-facto nationalized as the Fed has become the lender of first and only resort rather than the lender of last resort and the Treasury is the spender and guarantor of first and only resort. The only issue is whether banks and financial institutions should also be nationalized de jure rather than only de facto.

He also skewers the AIG bailout, pointing out it's really about saving the counterparties for all those naked derivatives written by AIG. Those counterparties include Goldman Sachs and Merrill Lynch.

News and banks analysts reports suggested that Goldman Sachs got about US$25 billion of the government bailout of AIG and Merrill Lynch was the second largest benefactor of the government largesse. These are educated guesses as the government is hiding which are the counterparty benefactors of the AIG bailout (maybe Bloomberg should sue the Fed and Treasury again to have them disclose this information). But some things are known: Lloyd Blankfein was the only CEO of a Wall Street firm who was present at the NY Fed meeting when the AIG bailout was discussed. So let us not kid each other: the US$162 billion bailout of AIG is a non-transparent, opaque and shady bailout of the AIG counterparties: Goldman Sachs, Merrill Lynch and other domestic and foreign financial institutions. So for Treasury to hide behind the "systemic risk" excuse to fork today another US$30 billion to AIG is a polite way to say that without such bailout (and another half a dozen government bailout programs such as the TAF, TSLF, PDCF, TARP, TALF and a program that allowed US$170 billion of additional debt borrowing by banks and other broker dealers with a full government guarantee) Goldman Sachs and every other broker dealer and major US bank would already be fully insolvent today.

I still wonder why there aren't riots in America. We are a bit grumpy about Mascot Finance but that's nothing compared to vast transfer of taxpayer wealth (now and in the future) down the black hole created by gazillionaire investment bankers. This long piece from Roubini is behind the subscription firewall at RGE Monitor. I encourage you to subscribe. It's worth the price of admission. Ambrose is shocked and awed The Torygraph's often hair raising commentator Ambrose Evans-Pritchard is calling for 'shock and awe' tactics (including massive money-printing bond buybacks by the US Federal Reserve) to stop the world from falling into a Depression. He makes a strong case for panic.

Evans-Pritchard wonders why the Fed hasn't gone on a bond-buying spree already.

From all accounts, the Fed was ready to launch its bond blitz in January. Something happened. Perhaps the hawks awoke in cold sweats at night, fretting about Weimar. Perhaps they feared that China and the world will pull the plug on the US bond market. If so, it is time for Washington to get a grip. America remains the hegemonic global power. The Obama team should let it be known "“ and perhaps Hillary Clinton did just that on her trip to Asia "“ that any country playing games with the US bond market in this crisis will be treated as an enemy and pay a crushing price.

He paints a very broad and compelling picture. Well worth reading in full.

In any case, the storm has shifted across the Atlantic to Europe. Germany faces 5pc contraction this year (Deutsche Bank). The bill has come from the burst bubble in the ex-Soviet bloc. Europe's banks are on the hook for $1.6 trillion (£1.1 trillion). For the first time since the launch of monetary union, Europe's leaders are speaking openly about the risk of EMU break-up. A run on the US dollar looks a remote threat as the euro drama unfolds. The Fed may soon have all the room for manoeuvre it needs. Small comfort.

The Chinese Smoot Hawley This is a fascinating (if long) blog item by Michael Pettis, a professor at Peking University's Guanghua School of Management who specialises in Chinese financial. He makes a strong argument that the real 'Smoot Hawley' risk in global trade is not from new 'Buy American' restrictions but from Chinese attempts to boost exports. This is well worth a read. Here's a taste.

The problem, as I see it, is while an awful lot of experts here are busy explaining why the US must be careful about how quickly it reduces its contribution to global demand, which the US absolutely must do as part of its adjustment process, they seem to miss the point that China must increase its contribution to net demand, but it is actually reducing it. It may be confusing to many if I claim that subsidizing credit to steel producers or auto manufacturers is the 2009 equivalent of Smoot-Hawley "“ after all isn't Smoot Hawley all about tariffs? "“ but the point is the reason Smoot-Hawley was such a disaster is because it involved an attempt by the largest trade surplus country in the world to increase its trade surplus in spite of collapsing world demand, and the 2009 equivalent must necessarily be Chinese or German moves that have the same effect.

Pettis is saying that the Chinese stimulus plan is mostly about stimulating export production rather than domestic consumption, thus repeating the errors of Smoot Hawley. He suggests a trade war is brewing.

I am only pointing it out because there is a real and growing risk that while busily crying "Smoot-Hawley" at the US, China is going to blunder its way into the same terrible mistake the US made in 1930, and my conversations with US and European officials convince me that frustration levels are already too high. Needless to say it is not just readers of my blog who have noticed that China's trade surplus has risen inexorably during the time this crisis has taken place, and even a very superficial reading of the world press suggests that this is causing rising anger. Trade conflict would be terrible for China, and I don't see how it can end well for China if something doesn't change soon.