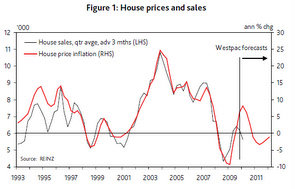 Westpac's economists have forecast house prices have further to fall and have estimated the tax changes announced in the May 20 Budget had reduced the fundamental value of property.

Brendan O'Donovan and Dominick Stephens published a research note titled 'House prices: further to fall' on Friday that pointed out the housing market had slowed and the market would adjust to the budget changes by reducing house prices, increasing rents by 7% more than without the tax changes and increasing home ownership rates.

"Interest rates will rise further, tax changes are now an unfavourable reality for property prices, and population growth is still slowing," they said.

"We expect lower-end property prices will be hit hardest by the reduction in income tax. Landlords will probably prove more sensitive to tax, and they are most active in the cheaper market segments. Furthermore, the potential buyers of top-end properties will get the biggest after-tax income boosts, so prices in that bracket should outperform."

Here is the full report below and in PDF form here.

The state of play - past and predicted

It has been a slow year for the housing market. Sales have been subdued all year. Inevitably, the time taken to sell a house has lengthened. The REINZ's House Price Index indicates that prices are now falling, at a gentle pace. And the state of house sales is a solid indication that prices will continue declining through to about September.

As we predicted in our last housing update, the 2009 market resurgence turned out to be a "flash in the pan."

Bugging the market over 2010 have been rising interest rates, impending tax changes, and slowing population growth. The positive vibe of an improving economy has not been enough to counterbalance these negatives. We foresee more of the same.

So we are forecasting modest house price declines, in the order of 2% per annum, for 2010 and 2011. We expect house sales will pick up briefly as property investors reorganise their affairs in light of the new tax reality.

But beyond the next few months, we anticipate a long period of fairly subdued house sales. People are less inclined to upgrade their house, or get into property, when prices are flat or falling.

In late-2007 we noted that houses were grossly overvalued, and predicted house prices would be "in five years' time similar to today"

Almost four years on, prices are 3% lower than they were back then. Over the same period inflation has been 8.8%, so the real house price decline has been almost 12%. We are "almost there" in terms of the adjustment necessary to correct the mid-2000s house price overvaluation.

Based on today's fundamentals, we'd say houses are only slightly overvalued. However, impending tax changes will reduce the fundamental value of houses, creating a renewed reason to expect ongoing price weakness.

Landlords receive tax rebates for cash losses on their properties, but their capital gains are usually untaxed. The recent tax cut will make landlords' annual rebates smaller, thus increasing the cost of owning an investment property. Freehold owner occupiers avoid income tax in the sense that any other investment would incur income tax on the flow of benefits, while owner occupied housing does not.

The tax cut will improve the return on alternative investments relative to buying a bigger/better house. Other tax changes have smaller implications for house prices.

Much has been made of the removal of depreciation allowances, but that's actually a minnow. It will seriously harm cash flow for a few highly-leveraged property investors, but it will only slightly reduce the overall attractiveness of property investment by removing what was, in effect, an interest free loan (investors were required to pay back any depreciation claims upon sale, had the property not actually depreciated).

The GST hike is positive for prices on two fronts - it drives up the price of building new houses, and it makes housing (which is exempt from GST) a more preferred form of consumption. We estimate that house price inflation over the next few years will be about 10% less than it would have been if the tax system had remained unchanged.

The Treasury's estimate of the price impact was more modest, at 2%.

With landlords now receiving a smaller tax subsidy, the yield on rental properties will have to rise.

Our calculations suggest rents will end up about 7% higher than they would have been had the tax system remained unchanged.

Finally, higher rents and lower house prices will tend to increase the rate of home ownership, relative to what would have occurred in the absence of tax change.

It will take years for these changes to work through the market. Most likely, we will experience years of higher rent growth and weak house prices, rather than a big-bang adjustment as soon as tax cuts are implemented.

We expect lower-end property prices will be hit hardest by the reduction in income tax. Landlords will probably prove more sensitive to tax, and they are most active in the cheaper market segments. Furthermore, the potential buyers of top-end properties will get the biggest after-tax income boosts, so prices in that bracket should outperform.

We expect an element of "price dispersion" in the market over the next few years, similar to the experience of the 1990s when tax changes were unfavourable to landlords and favourable to high income earners. The opposite (price compression) occurred in the 2000s, after the introduction of the 39 cent income tax rate enhanced the incentive to buy rental property and simultaneously reduced after-tax incomes of top-end wage and salary earners.

The 2009 boost to the housing market may have been partly caused by buyers rushing in while mortgage rates were low. Now that floating rates are on a rising trend, buyers seem more reluctant. We expect floating mortgage rates to steadily rise to a "new normal", higher than the average that prevailed in the 2000s. Bank funding costs are much higher than they were last decade, and the Reserve Bank cannot use the OCR to shelter us from that forever.

Higher average mortgage rates over the coming years will curtail affordability and reduce demand for housing - yet another reason to anticipate subdued prices.

As we've said elsewhere, the NZ economy is well into the recovery phase that normally follows recession. Unemployment is falling, and job security is much improved. The situation is expected to improve further over the next couple of years as wage growth eventually accelerates from its current snail's pace. Better job prospects should encourage more youngsters to fly the coop and enter the rental market.

The final reason to expect subdued house prices over the next few years was covered in last week's bulletin on housing supply/demand balance. The 2009 price spike may have been partly related to an emerging housing shortage, as population growth was high and house building was low. By our reckoning the housing shortage is now stabilising and the situation will begin to normalise next year.

This implies that the "shortage premium" will wane over the next few years, further suppressing price growth.

Possible though to have shortages and falling prices...
All it takes is weak demand and a change in the tax environment...

Many thanks. Yes I need a haircut.