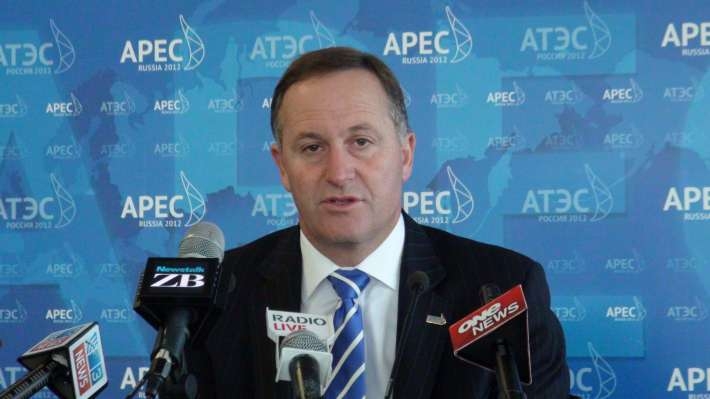 By Alex Tarrant in Vladivostok

Talks at the APEC trade forum in Russia have been tempered by a dose of realism about the challenges facing the eurozone, Prime Minister John Key says.

Add in a slowdown in China, and problems emerging in Latin American giants Brazil and Argentina, the sense in Vladivostok is the global economy is still fragile and that the outlook remains uncertain.

But having navigated through four years of turmoil already, world leaders are likely to have a better sense now of what the ongoing effects of the financial crisis might be, and how to better counter them, Key told media on Sunday.

And New Zealand was in relatively good shape to face the headwinds due to its connections to growing Asia-Pacific economies.

“What we’re seeing is some sort of slowdown in China, and definitely the European situation is casting quite a big shadow over the global economy in general," Key said.

“While there is a sense that everyone would like to see that position improving, I think that there’s a recognition that it’s almost certain Europe will be in recession, that none of the countries there are experiencing any levels of significant growth – outside of Germany – and that is likely to have quite an impact for a period of time," he said.

There was a bit more confidence in terms of progress with the United States economy.

In terms of Asia, most of the countries New Zealand officials talked to at APEC were experiencing reasonably good growth.

Latin America was a mixed bag. Brazil and Argentina were facing very high levels of inflation, falling commodity prices and an overvalued exchange rate, all of which were affecting both economies quite dramatically, Key said. Others, like Chile and Peru, were still growing at reasonable levels.

Key touted greater trade integration as a cure which was not financially costly, and was likely to stimulate growth.

NZ in better spot than most

New Zealand was in relatively good shape for dealing with weaknesses in parts of the global economy.

“It’s got it’s challenges but [New Zealand's] in a part of the world which is still, in my view, likely to present growth," Key said.

Key said his position on Europe had not changed based on talks at APEC.

“When we came back from Europe [in June] it was pretty obvious to us that there are very significant issues there, and they’re quite long-term structural issues that won’t be resolved easily," Key said.

“These are countries that have high levels of debt, high levels of bureaucracy, inflexibility in their labour markets, and significant cost bases," he said.

The biggest issue facing New Zealand, and the global economy in general, was what the final impact of the European slowdown on the Chinese economy would be.

“From New Zealand’s point of view, we’re very Australia-China dependent now. If China really slows down then that could slow Australia down," Key said.

"One of the slightly worrying things is that you saw iron ore prices [fall] – eight or nine years ago they were $23 a tonne, it went all the way up to about $260 a tonne, [and] the general feeling was that there would be a floor at $120.

"Last week they’re $83. The only reason that is happening is because China’s demand is currently on hold or reducing," he said.

Where's the news in this item? - every visitor to interest.co.nz is way ahead in terms of knowing the facts - what's missing is the policy to fit the facts. - is this man John Key actually the PM?

You'd think he could have at least given us the inside running on caviar futures.

No sense of dplomacy either.

Two good points have emerged from the APEC meeting in Vladivostok :

Firstly , that world leaders & John Key are now acknowledging a slowdown , that the economic recovery since the GFC remains " fragile " ....... the contrarian in me suggests that this indicates a robust recovery from the GFC is imminent .....

...... and secondly , it's so blasted cold even in a Vladivostok summer , that the world leaders ( and John Key ) didn't have a chance to prance around in multi-coloured shirts or kaftans ....

You seem to be ignorant , yet again , that during an economic expansion , interest rates go up ...... holders of term deposits are finally rewarded for their thrift ..... and bond-holders of government debt get clobbered ....

slow down or "soft landing"?   phhhh remember that RBNZ beauty?

When will they start using the word 'depression'? Can it be only a once in a human lifetime usage of the word?

'secondly , it's so blasted cold even in a Vladivostok summer , that the world leaders ( and John Key ) didn't have a chance to prance around in multi-coloured shirts or kaftans

Come on GBH. The shirts are generally the only memorable thing that comes out of the exercise.!

....... fair enough , if you think world leaders ( and John Key ) look sartorially resplendent dressed in something that appears to have fallen  out of Demis Roussos's wardrobe .....

In my eyes they always look so much  more appropriate when they are dressed as clowns.

(and I was interested in your differentiation between John Key and World Leaders...hehehe)

realism? thats like believing in snow white but that she's not a virgin...

Yes, thats been pretty obvious for some time.

New Zealand was in relatively good shape for dealing with weaknesses in parts of the global economy.

“It’s got it’s challenges but [New Zealand's] in a part of the world which is still, in my view, likely to present growth," Key said.

In other words.............while the huge world economies are long gone off a cliff.....good old NZ is still preparing to DIVE off under the ever popular illusion of more DEBT = 'growth'!

Seriously.......does ANYONE believe a word these tossers say?